London: Travelling to Mars may speed up the ageing process, making it dangerous to send humans to the Red Planet, scientists fear.

Many space agencies, including Nasa, have plans to put humans on Mars, with SpaceX to launch the first manned flights as early as 2026. 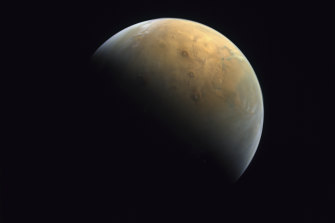 Human travel to Mars will depend on scientists limiting the radiation experienced by astronauts. Credit:UAE Space agency

However, scientists at the Mayo Clinic hope to prevent such trips triggering an ageing process known as cell senescence, and in February will start the first ever study into the phenomenon.

The team will take blood and urine samples from four members of the first all-civilian crew to fly to the International Space Station (ISS), to see if they can spot early signs of senescence.

The ISS lies within the protective magnetic bubble known as the Van Allen belt, which shields the Earth from radiation and the crew will be there for 10 days.

However, travellers to Mars would have no such protection, and would be subjected to the conditions for months or years. Previous studies have found that astronauts who flew lunar missions are five times more likely to die from cardiovascular disease than those who went into low orbit.

Dr James Kirkland, an expert on cellular ageing at the clinic in Minnesota, US said: “This flight will give us an idea of whether routine spaceflight, without even going beyond the Van Allen belt, is associated with cell senescence.

“If we see senescence even under these conditions, we would certainly want to do some work in preparation for a longer mission. Something will have to be worked out before interplanetary flights are really feasible.”

As humans age, cells in the body increasingly enter a state of permanent torpor. Neither alive nor dead, these “zombie cells” prevent the body from replacing the non-functioning cells but they also are not cleared away. Instead they can pump out chemicals which increase inflammation in the body, ramping up the risk of disease. In youth, senescent cells are important, clustering around the site of injuries as a signal to the immune system that there is damage that needs repairing.

Without them, wounds heal more slowly. In those younger years, the zombie cells are cleared away afterwards, but as people age, the immune system loses the ability to sweep them away.

“You find senescence in conditions where cells are under stress, and they deform,” added Dr Kirkland.

“Zero gravity results in changes in cell shape, and the high G-force when a rocket takes off could also conceivably contribute to DNA cellular senescence.

“Then there is radiation. The crew on the ISS will be inside the Van Allen belt but the real worry is what’s going to happen if there is a Mars mission, and if there is a solar flare, because then you’re dealing with atomic radiation.

“We’ve found in preliminary studies very low doses of atomic radiation can drive a cell into senescence at much lower levels than x-rays or gamma rays.

“And, with atomic radiation, it could pass right through the spacecraft: it’s hard to stop. So if there’s a Mars mission this could really be a major problem.

“I’m a physician, not a space scientist, so my view is biased, but I’d say the health problem is pretty darn bad, and I’m very worried after what I’ve seen.”

The ISS mission is being led by the commercial space company Axiom 1, and the astronauts will be launching with SpaceX. The crew includes Michael López-Alegría; a former Nasa astronaut and vice president of Axiom Space who will be mission commander.

Larry Connor is the mission pilot. Mark Pathy and Eytan Stibbe will be flying to the station as mission specialists.

The crew will also be taking up various kinds of human cells which are in a pre-senescent state in special incubators, to see if the conditions on the ISS tip them over into an early dormancy.

“The cells are on the verge of senescence, and we want to see if zero gravity, plus G forces and a high carbon dioxide atmosphere in the capsule plus the radiation will drive human cultured cells that are pre-senescent into a state of senescence. We’ll have similar control cells back on Earth.”

Luckily, if the team does find out that spaceflight causes cellular ageing there may be hope. There are currently 15 clinical trials underway in drugs called senolytics, which may fight the process.

Early data suggest they can improve physical function in people with fatal diseases caused by cell senescence, such as the lung disease idiopathic pulmonary fibrosis, but studies are also under way in Alzheimer’s disease, diabetes, frailty, and osteoarthritis.

There are even hopes that the drugs could be used in donor organs to “turn back the clock” before they are transplanted into younger people.

“We will need to develop these or other drugs that target fundamental ageing processes to see if we can mitigate the damage before we go to Mars,” Dr Kirkland added. “I am touching wood that these drugs will work.”