Tony Siciliano knew this was going to happen nine months ago.

Victorian farms don’t have enough workers. A dearth of backpackers and seasonal workers because of international border closures was the first trigger, an ambivalence from Australians towards the idea of spending the summer picking fruit the next. Not even a federal government ad luring locals to become the farmer who finds a wife or husband could bridge the gap. 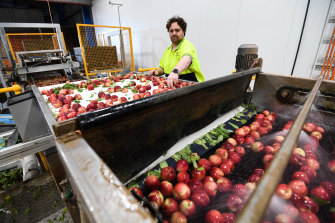 Goulburn Valley fruit farmer Tony Siciliano says this has been the toughest season of his 42-year-old life.Credit:Tony Siciliano

Mr Siciliano works 18-hour days on his fruit farm in Victoria’s Goulburn Valley, rising before the sun does to pick, pack, load, unload, water, prune, spray. Everything, it appears, but rest.

In a normal year every nectarine, cherry and peach gets picked from the trees – a sweet, juicy reward for almost a year of pruning and preparations. Mr Siciliano says while he has managed fine this year, he knows of fellow farmers who are leaving up to 30 per cent of ripe fruit on the ground.

“Price is one thing, but the time and effort that we put in is where it hurts more,” says the 42-year-old, born and raised on the farm his grandfather began after emigrating from Italy in the 1960s.

“When you see fruit fall on the ground, your pride falls with it as well.” 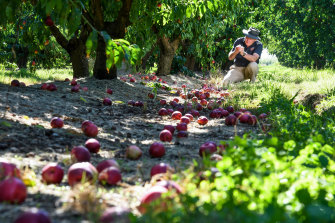 Fruit left on the ground due to a lack of workers becomes a ‘reservoir’ for fruit flies, which can then soil ripe fruit.Credit:Joe Armao

The Victorian Farmers Federation started ringing alarm bells nine months ago, pleading for more schemes to entice more locals and Pacific Islanders into the country to work in agriculture, a $12.6 billion industry nationwide.

The Andrews government came to the party last month, announcing 1500 Pacific workers would gradually arrive by the end of June – short of the 15,000 to 20,000 that the Premier acknowledged were needed in December.

The impact of labour shortages won’t just hit Victoria’s commercial farms. The flow-on effect will soon extend to home gardeners in both Melbourne and regional Victoria.

The fruit flies are coming.

“In the last 10 years the Queensland fruit fly has spread into Victoria, where it never was before,” says Andrew Jessup, an entomologist of 30 years specialising in fruit flies.

Fruit flies lay between 800 and 1000 eggs on “pretty much every single fruit a person can grow”, Mr Jessup says, and immediately soil the produce. In recent years the real fight has gone from commercial farms, better equipped with pesticides and equipment, to backyard pear and lemon trees.

Not in a rush to pick rotting fruit in your garden? You should be, says Mr Jessup.

“This year it is likely to be a perfect storm of factors. Flies are attracted to a wet winter, which we’re expecting with La Nina. And now it will be exacerbated with fruit falling on the ground on farms. That leftover fruit acts as a reservoir and breeding ground for fruit flies.” 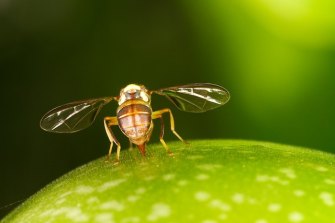 Queensland fruit flies are a pest, laying up to 1000 eggs at a time on almost every type of fruit.

The next flow-on effect could go interstate or even international.

“We were getting locked out of markets, we couldn’t send produce to South Australia or even Melbourne without a certificate proving we didn’t have fruit flies,” he says.

Mr Siciliano fears a fruit fly outbreak would be the only justification a country such as China would need to put a ban on Victorian or Australian exports.

“About 20 to 30 per cent of my produce goes overseas in a normal year. We need more government focus on this and we need financial support for local groups who help the community stay on top of it.”

Stone fruit, pear and apple season in the Goulburn Valley area usually begins in October and ends in early April, producing $337 million or 50 per cent of the value of Victoria’s fruit every year. February is peak season and understaffed farms are having to leave more fruit in orchards than ever before. 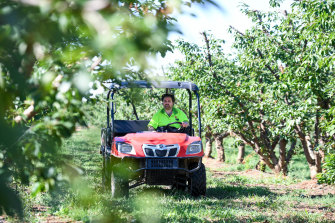 Tony Siciliano says commercial farms like his are equipped to fight fruit flies but home gardens can become vectors.Credit:Joe Armao

Worker shortages have also started affecting prices – a December report by the federal government’s commodity forecast ABARES predicted price hikes of 15 to 25 per cent in 2021 for apples, pears and stone fruit – three main products of the Goulburn Valley – along with grapes and summer vegetables.

Federal Nationals MP Damian Drum, whose electorate covers the Goulburn Valley, points out it was Victoria’s responsibility to come up with a quarantine scheme, which they did months after Queensland, NSW, Tasmania and the Northern Territory.

“If fruit fly takes over because of this government inaction, we run the risk of ruining an entire sector with our overseas export markets. It’s just heartbreaking and it’s a question a lot of people don’t want to talk about,” he says. 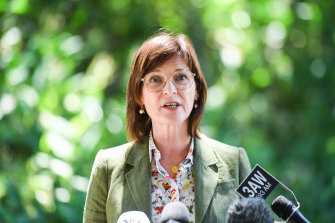 In response to heavy federal criticism, Premier Daniel Andrews has pointed to the inherent complications of international quarantine in a state already scarred by quarantine bundles that sparked its second wave.

Victorian Agriculture Minister Mary-Anne Thomas said a five-year strategy to combat fruit fly will be released in May before defending her government’s efforts to bolster worker numbers: “We’ve said from the start that welcoming Pacific Island workers in for harvest wasn’t going to be a silver bullet for shortages, and that more work needed to be done to incentivise locals.“

Fruit Growers Victoria spokesman Michael Crisera, who manages administration for many farmers in the Goulburn Valley, insists there is still time this season for every new employee, especially locals, to help decrease wastage and fruit fly spread.

Noting that, the Victorian government this week announced $6 million for farmers to cover accommodation and transport costs.

“We’ve run a local campaign called PickShepp. We’ve had 1100 people register, but probably only placed about 100 people in picking jobs. Fruit picking is a very physically demanding job. How many have left after a couple of days, I don’t know,” he says.

“The situation we’re in, it would make a difference even if we get some workers out for two weeks at a time now.”

And home gardeners take note: Mr Jessup says you will also play a vital role in subduing the fruit fly.

“Gardeners really must pick their fruit even if they don’t need it,” Mr Jessup says. “Or use it to pickle it or make jam.

“But there’s absolutely no doubt, fruit flies are already being found in areas of Victoria that have never seen them. They are coming closer to Melbourne already, in places like Greensborough. It’s something the whole community needs to be aware of.”

Tags: falls, It, Pride, Ro, with, your
You may also like
Celebrities News