Emergency services are preparing to issue evacuation warnings to residents in parts of the state’s east with further heavy rain forecast following wild and devastating weather in recent days.

It comes as the body of a second person is recovered from flood waters, this time at Glenfyne in the state’s south-west. 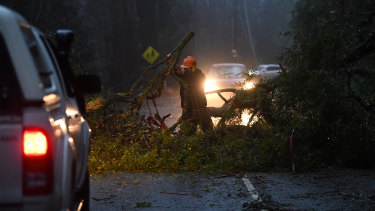 Acting Premier James Merlino said that in the last 48 hours emergency services had received more than 7400 requests for assistance and there are more than 121,000 homes still without power.

“If there is an evacuation warning, please get out,” Mr Merlino said.

A Victoria Police spokeswoman said search and rescue officers located a body, believed to be that of a missing 20-year-old Simpson woman, in floodwaters off Maddens Bridge Road about 10.40am.

“While the body is yet to be formally identified, police believe it is that of missing woman Nina, who went missing from Simpson on Wednesday,” the spokeswoman said.

Mr Wiebusch said emergency services were already in the process of relocating a nearby caravan park and door-knocking homes.

“Regardless of COVID restrictions, if you do find yourself presented with an emergency warning or asked to evacuate you can absolutely leave your home to move to a safer location,” he said.

On the outskirts of Melbourne, the upper reaches of the Yarra River are expected to see major flooding with the Healesville-Yarra Glen Road closed on Friday.

The racecourse and 20 properties there are expected to come under threat, Mr Wiebusch said. 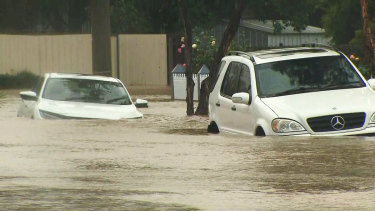 Mr Wiebusch said there had been the 42 flood rescues in the past 24 hours.

“I can’t emphasise enough to never attempt to drive through flash flood waters,” he said. “It could be the last decision you make.”

The biggest challenge now, Mr Wiebusch said, was the Traralgon community because while the river was receding and the Princes Highway reopening, more rain was forecast.

That rain forecast includes 80 to 100 millimetres of rain set for the Traralgon catchments later today and tonight when major flooding is expected to return, Mr Wiebusch said.

In Traralgon, 30 homes have already been affected by flood waters alongside homes in the Hazlewood and Maffra areas.

“We expect to reissue an evacuation order again this afternoon,” Mr Wiebusch said. 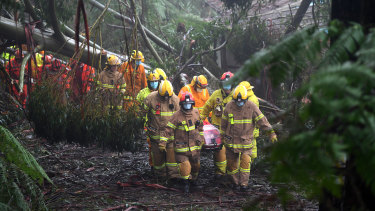 A further 15 to 25 millimetres of rain is forecast across the southern parts of the state and into Gippsland and 40 to 60 millimetres over western and central catchments.

As of Friday morning, Mr Wiebusch said 121,000 homes remained without power with major efforts currently underway to restore telecommunication services with phone and NBN services still down across parts of the AusNet footprint.

“We’re getting generators into sites but access has been difficult,” he said.

Two people have lost their lives in flood waters in the past 24 hours. 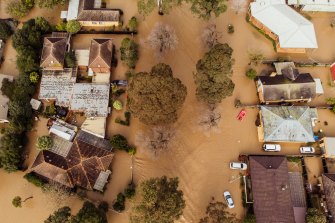 An aerial view of flooding in the township of Traralgon in Gippsland. Credit:Blake Bourne

On Thursday afternoon, a rescue team recovered a man’s body in the South Gippsland town of Woodside, about 70 kilometres from Traralgon, after members of the public reported a vehicle almost submerged in flood waters. The man is believed to be aged in his 60s.

On Friday the body of a woman, believed to be a missing 20-year-old from Simpson known as Nina, was discovered in flood waters following a public plea for information after she failed to arrive at work on Wednesday.

Mr Merlino urgent residents in flood-affected areas to pay attention to any warnings.

“It was quite extraordinary leaving home and driving through the Dandenongs this morning. Just massive trees across homes across the roads,” Mr Merlino said.

“If there is an evacuation warning, please get out.”