‘Gender affirmation is demonstrably dangerous for young people’: Woman who has detransitioned speaks out claiming doctors are treating teens too early and not dealing with root problems

A woman who de-transitioned has called gender affirmation ‘demonstrably dangerous for young people’.

Cat Cattinson, a 30-year-old singer and musician, grew up as female but identified as male from the age of 13. She took testosterone, went by the name of Tony, and made plans for breast-removal surgery.

But the drugs started having negative effects on her heart, and deepened her cherished singing voice. She decided in 2020 to stop the testosterone injections and begin her de-transition back to being a woman.

Now, she has spoken out against doctors she claims are treating teenagers too early and not dealing with the root problems behind gender dysphoria – and has called for a ban on transgender medical interventions for minors. 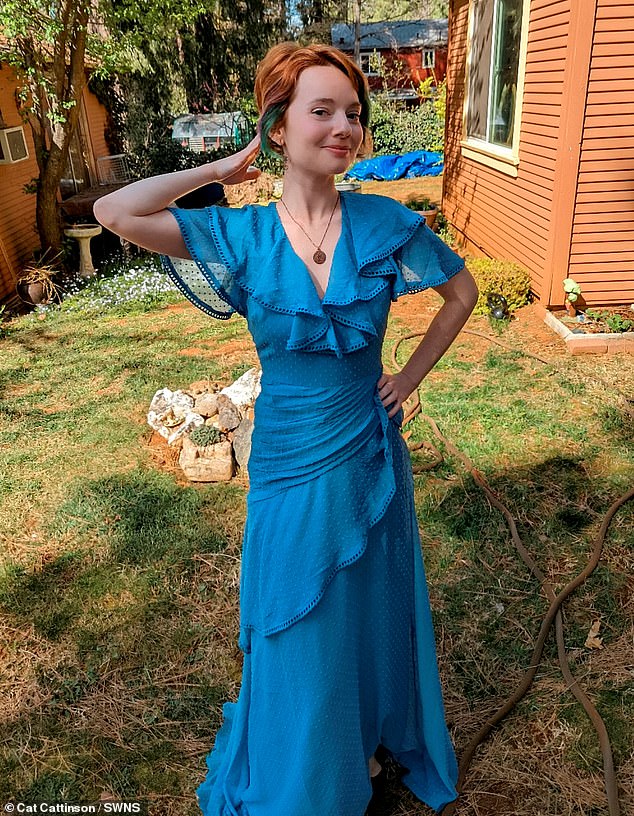 Cat Cattinson, 30, a singer and musician from California, transitioned from female to male but later regretted her procedures and detransitioned. Now, she has spoken out against doctors she claims are treating teenagers too early and not dealing with the root problems behind gender dysphoria, and has called for a ban on transgender medical interventions for minors

Gender dysphoria is the term for when a person’s emotional and psychological identity is different to their physical form.

It is estimated that one per cent of the population is affected somehow. Caitlyn Jenner is the most famous person to have changed genders.

The former Olympian and reality TV star underwent the surgery in January 2017, nearly two years after announcing she would transition to a woman.

In the ICD-11, the WHO created new categories that cover trans identities under conditions that relate to sexual health.

Gender dysphoria once was considered a personality or behaviour disorder. But its definition has changed as it is now called gender incongruence.

It is described as ‘characterised by a marked and persistent incongruence between an individual’s experienced gender and the assigned sex’.

Writing for Fox News, Cattinson described her experience of being a 13-year-old, researching her feelings of ‘aversion to my biological sex’ on her computer. She found she was not alone, and ‘began visualizing adult life as a man’.

She came across a website called FTM Resource Guide (that still exists) that – its homepage states – aims to provide ‘information on topics of interest to female-to-male (FTM, F2M) trans men, and their friends and loved ones’.

Cattinson started to ‘bind’ with a compression bandage, she recalls, and asked her mother to buy he clothes for boys. She then came out to her parents.

However, ‘after they researched the atrocities of “female-to-male” surgeries, they decided not to “affirm” my revelations,’ she writes for Fox News.

This was devastating for her at the time, she says, and she became convinced that the only way to cure her gender dysphoria was through ‘transitioning’. This, she thought at the time, was her ‘only shot at true happiness’.

Another transgender resource website called Susan’s place said that ‘many medical professionals have come to consider ‘post-transition’ transsexuals to be fully cured of their dysphoria or any other disorder,’ she writes.

This was an appealing prospect, Cattinson says. She had also developed treatment-resistant anorexia nervosa, so she saw the treatment as a way to solve all of her ‘mental illnesses’. ‘Believing I was trans sabotaged any attempts to improve my mental health without hormones or surgery,’ she writes. 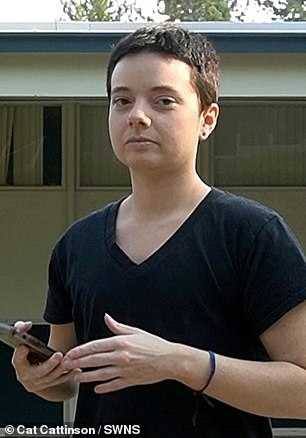 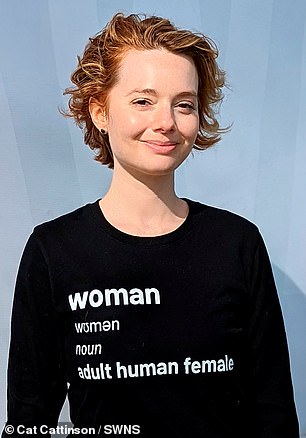 Cat Cattinson transitioned from female to male and went by the name Tony, but experienced medical problems and stopped taking the male hormone testosterone in an effort to detransition and reverse the procedure

At the age of 17, Cattinson asked her parents to find her a gender therapist. Her family found Dr. Ryland (a fake name used by Cattinson to hide the doctor’s true identity), hoping that he would give them an ‘honest assessment’.

‘Instead, he affirmed me as a boy immediately,’ the singer writes.

‘He was unfazed when I brought up my anorexia and persistent social problems. I told him gender dysphoria was my root issue, and he accepted my self-diagnosis,’ she says. Looking back, she realises that this was very different to when she was seeking treatment for her eating disorder, which involved far more scrutiny.

‘It was clear Ryland wasn’t there to listen, but to guide me to a solution: transitioning,’ Cattinson writes for Fox News.

After three appointments, Cattinson says Dr. Ryland suggested to her parents that she be put on testosterone treatment. This was shocking to them, she says, as her parents were expecting the doctor to ‘provide an impartial opinion’.

Her parents did not allow Cattinson to go on the treatment at her age.

She says she instead almost went ahead with transitioning around six years later, at the age of 23, but said a ‘traumatic experience’ convinced her to stop.

Years later, at the age of 28, she came out as trans in public and ‘after years of deliberation and an overwhelming sense of desperation’ again started testosterone. She scheduled a double mastectomy, and filed to change her name and gender.

Within months, I experienced debilitating side effects and the loss of my natural singing voice,’ she writes. ‘I didn’t realize that singing was more important to me than gender until it was too late. I have since detransitioned, and besides my voice, testosterone’s effects have faded.’

One 2022 study of 104 transgender and nonbinary (TNB) youths (aged 13 – 20) found that gender-affirming care was with 60% lower odds of moderate or severe depression and 73% lower odds of suicidality.

However, this does not work for everyone. Others who used drugs or surgery – such as Cattinson – to change their gender have since regretted their procedures, and spoken out against having severe medical procedures at a young age. 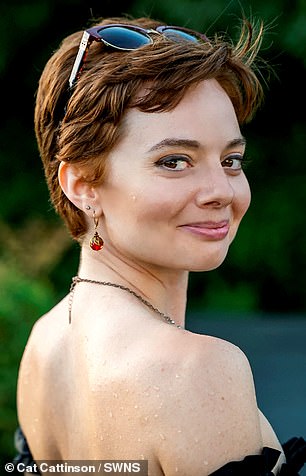 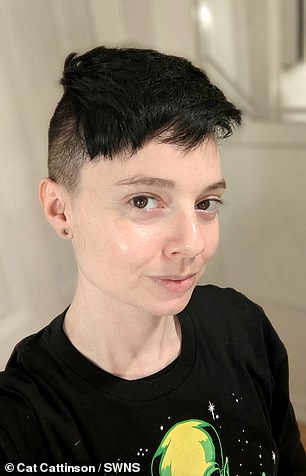 Writing for Fox News , Cattinson described her experience of being a 13-year-old, researching her feelings of ‘aversion to my biological sex’ on her computer. She found she was not alone, and ‘began visualizing adult life as a man’. After years of trying and taking testosterone on-and-off, she stopped short of getting surgery and decided to de-transition

Had she gone through the same experience today, Cattinson says she might not have been able to turn back. The appeal of being able to stop her breasts from growing or never starting a period would have ‘felt like a dream come true,’ she says.

She thinks her parents could have been hesitant with allowing her to undertake such treatment, but a doctor could have persuaded them if they had been asked: ‘Would you rather have a living son or a dead daughter?’ she writes.

However, Cattinson says that many parents are unaware of the risks associated with puberty blockers – that include osteoporosis, brain damage and infertility.

What’s more, Cattinson says from her experience, ‘body modification is not a treatment for mental illness in any other scenario’.

In her Fox News piece, the 30-year-old sounds the alarm over The World Professional Association for Transgender Health (WPATH) saying that children as young as 14 – who question their gender – should be given irreversible cross-sex hormones.

WPATH, which is based in the United States, also says girls as young as 15 should be allowed to undergo breast removal surgery should they wish.

She says that when her parents refused to affirm her transgender identity, they ‘potentially saved my life’. ‘Gender affirmation is demonstrably dangerous for young people,’ she writes.

Cattinson was among a group of de-transitioners that addressed hearings of Florida’s medical board, which on November 4 voted to forbid the state’s doctors from prescribing puberty blockers and hormones, or perform surgeries, until transgender patients are 18.

Republican politicians in Tennessee, Oklahoma, Texas and Oklahoma have taken steps to restrict such treatments for children, but the decision in Florida was the first time limits were imposed by a US medical board, albeit one aligned to Gov. Ron DeSantis.

Now, Cattinson is calling on the rest of the United States – and the world – to follow Florida’s lead.

Many doctors, mental health specialists and medical groups argue that treatments for transgender youth are safe and beneficial, and some say they are necessary to prevent teen suicides, though rigorous long-term research is lacking.

But definitive data are hard to come by.

According to Pew Research Center, some 5.1 percent of adults younger than 30 are trans or nonbinary. Somewhere between 8 and 13 percent of them revert to their gender at birth, according to various estimates.

A Reddit group called ‘detrans’ has 41,500 members who share their experiences about dodgy doctors, stigma and other issues, including ever more ‘hateful, angry’ online posts in transgender forums.

Cattinson previously told DailyMail.com that the growing number of outspoken detransitioners has changed the conversation.

‘We’re at a really critical time right now, where we have the opportunity to safeguard kids from making irreversible decisions they’ll regret,’ she said earlier this month.

‘Public awareness has helped us get to this turning point, where people are realizing what’s going on and agree with us detransitioners.’