SEVERAL desperate introductions into the new series of Strictly Come Dancing, the scale of the problem became clear as TV presenter AJ Odudu began unleashing a CV that sounded more like a charge sheet.

“You may have seen me on Big Brother’s Little Brother, Don’t Rock The Boat . . .” 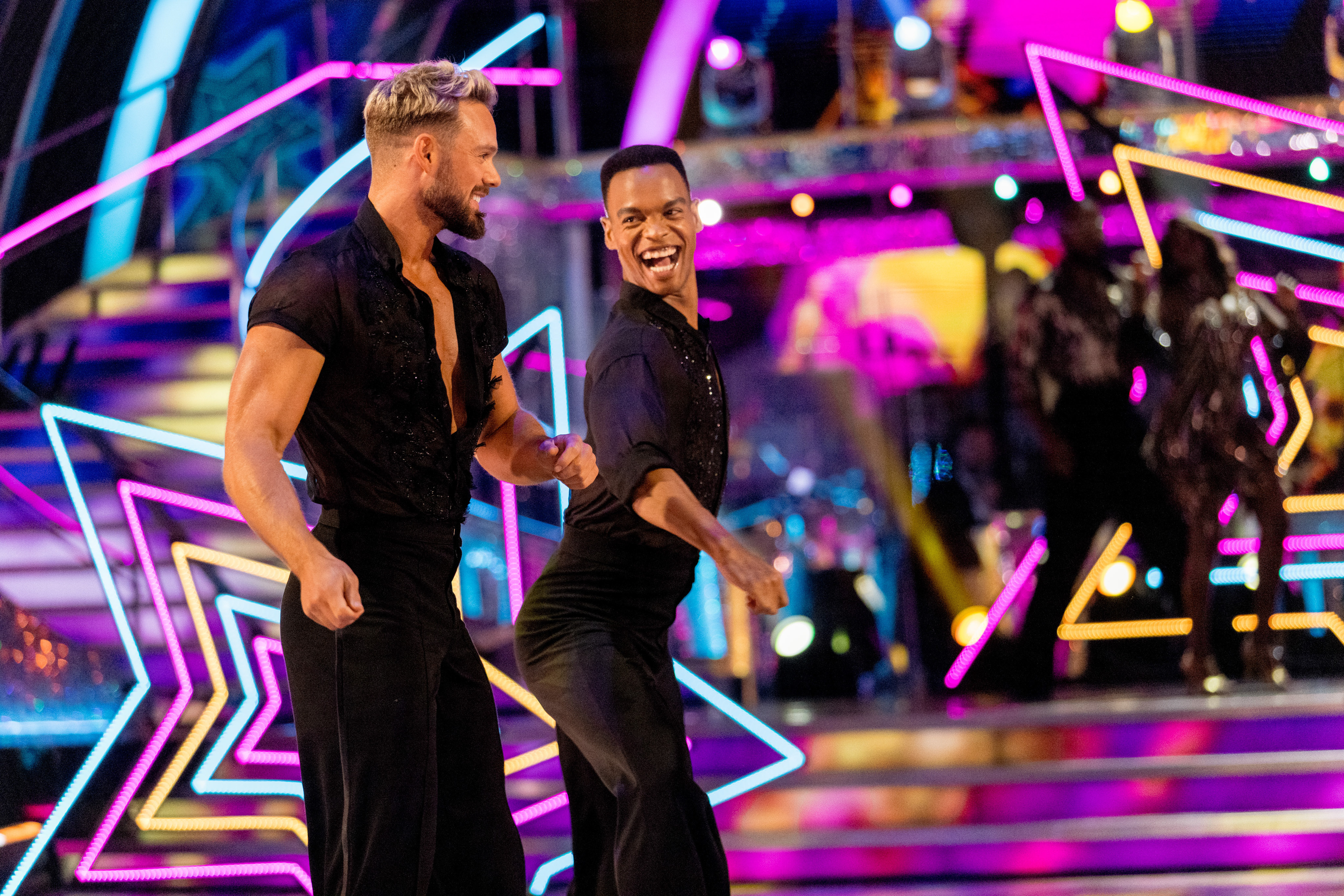 You may indeed, but give your head a wobble if you did, for these shows are crimes against television, not entertainment.

AJ, though, is actually one of this year’s better bookings and the very least of the problems with the 19th series of Strictly, where BBC1 has inexplicably allowed three unvaccinated professionals to take part.

A reckless oversight that could yet detonate the entire franchise.

If you thought for a moment, however, that these human time-bombs were going to stop the opening night gush, then you reckoned ­without every single one of the celebrities assuring Claudia Winkleman:

“Aljaz/Nadiya/Gorka/Whoever was exactly who I wanted all along.”

It’s a grim Strictly tradition and the reason I’d tweak the format next year.

Let the celebs gush away in the meet-and-greet VT.

Then, live on the night, tell them: “Right, this is who you’re really getting. Nikita, you’re lifting the tank. Dan, you’ve got the stroppy Polish midget. Rose, meet Brendan Cole.”

And then keep going, until the blood has drained from every single face in the studio.

It would, I think, add a light-hearted sense of jeopardy to proceedings rather than the dark spectre of Covid that hangs over this year’s series.

Alternatively, of course, the BBC could just do a better job with the bookings process and stop lumbering Strictly with worthies, obscurities, fringe soap actors and the offspring of famous people who shouldn’t be anywhere near its marquee show.

You may indeed, but give your head a wobble if you did, for these shows are crimes against television, not entertainment

There’s a long list of them this year, with the chief imposters being: Rhys ­Stephenson (me neither), the professionally northern Sara Davies, from Dragons’ Den, former Coronation Street star Katie McGlynn, who was damned by the words “Now Hollyoaks”, and Tilly Ramsay who, contrary to the show’s suggestion, is not a “chef” at all.

She’s a chef’s daughter and shouldn’t even have been on Strictly’s radar unless they’ve now got Gordon on a promise for next year.

Others, like Robert Webb, AJ, Rose Ayling-Ellis and Nina Wadia, if I’m generous, may yet earn their fee.

The booking the BBC seemed most proud of, however, was one of the chefs off Steph’s Packed Lunch, John Whaite, whose all-male partnership with Johannes Radebe brought back memories of last year’s first night when they were far more excited about the Nicola Adams/Katya Jones pairing than the appearance of Bill Bailey, their greatest ever contestant, despite the fact he was clearly going to be the star from the word go.

They wouldn’t ever admit it, naturally, but this is because there are a lot of people at the BBC who would much rather book a contestant who makes them look superficially “lovely” and inclusive than someone who’s actually going to thrill their viewers.

This, along with Covid-related reasons, is the reason why Strictly had its lowest launch ratings since 2010 and only three contestants who actually made me sit up and take notice.

The ­second is Mr Emma Thompson, Greg Wise, who said: “I haven’t watched myself in years.” (Well, why would you?)

And the third is the gangling figure of BBC Breakfast’s Dan Walker, who may be the only straight man on Earth “having dreams about Craig Revel Horwood chasing me with a stiletto” after landing Nadiya Bychkova.

Until further notice, though, the darkest and most exciting contest at Strictly Come ­Dancing 2021 is the one most viewers will be playing on the quiet: Guess the anti-vaxxer.

GREAT TV lies and delusions of the week. Late Night Mash, Nish Kumar: “This is a comedy show.”

Married at First Sight UK, Tayah: “I’m so excited about moving to Doncaster.”

Pursued it, but hasn’t caught one yet.

A DEEP DISLIKE OF SILVA

YOU think the cast know what the hell’s going on in BBC1’s Vigil? ’Cos, I’ll level with you, I’m struggling.

Listings magazines assure me there’s a Russian agent killing crew members on board the nuclear submarine, which is a promising enough start.

But the basic storyline has become submerged in sub-plots, flashbacks, phobias, technical jargon, glaring contradictions, howling continuity errors (see Commander Newsome’s epaulettes) and a clod-hopping political agenda that’s reduced the Royal Navy to Captain Pugwash levels of incompetence and made every single character as predictable as they are unlikeable. 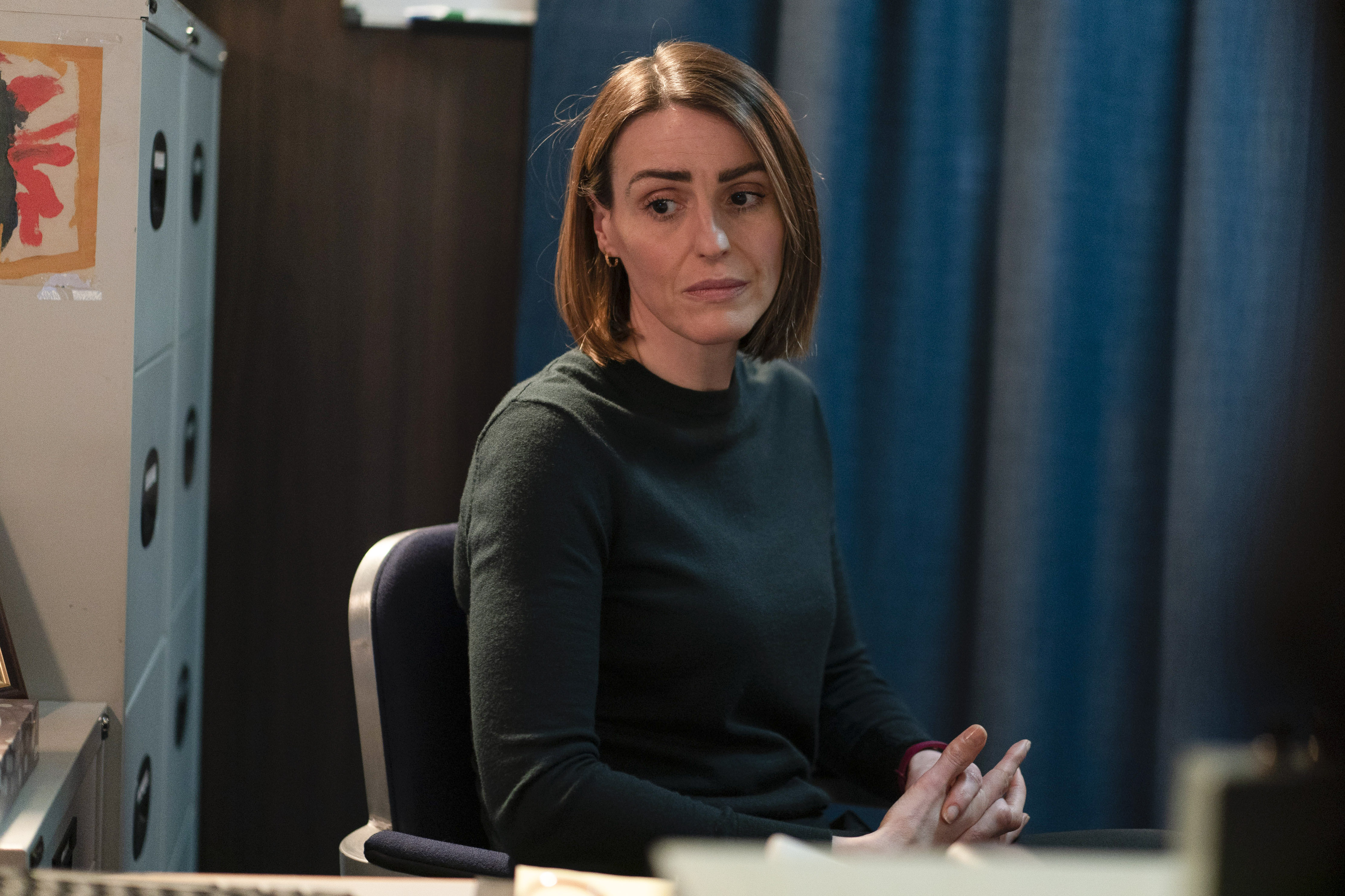 Ironically, the most hateful of the lot is also meant to be the heroine of the piece, Suranne Jones’ DCI Amy “das boot” Silva, who’s become the first character in television history to suffer a bout of Post Traumatic Lesbian Disorder, after her husband drowned in a car accident.

A terrible affliction, this one, which required her to jump into a flashback bubble bath with DS Kirsten Longacre, on Sunday night’s episode, and fart out this dialogue.

“You look like an iceberg, 90 per cent submerged.” “And are you my Titanic?”

Or did you just go down on the old Queen Mary?

Who knows, but by the end of the hour Silva had been locked in a nuclear torpedo tube by Russian agent Doward, who’s hopefully preparing to launch her into oblivion.

If she’s in luck, Silva will splash down harmlessly somewhere in the Baltic.

If we’re completely out of luck, she’ll crash land in a second series of Vigil.

Unexpected morons in the bagging area

TIPPING Point, Ben Shephard: “The word Danish relates to the language and inhabitants of which country?”

Ben Shephard: “The first televised Presidential address given from the Oval Office, in 1947, was made by which US President?” Taj: “George Washington.”

Ben Shephard: “Which Dutch city is widely known as the international city of peace and justice?”

LOOKALIKE OF THE WEEK 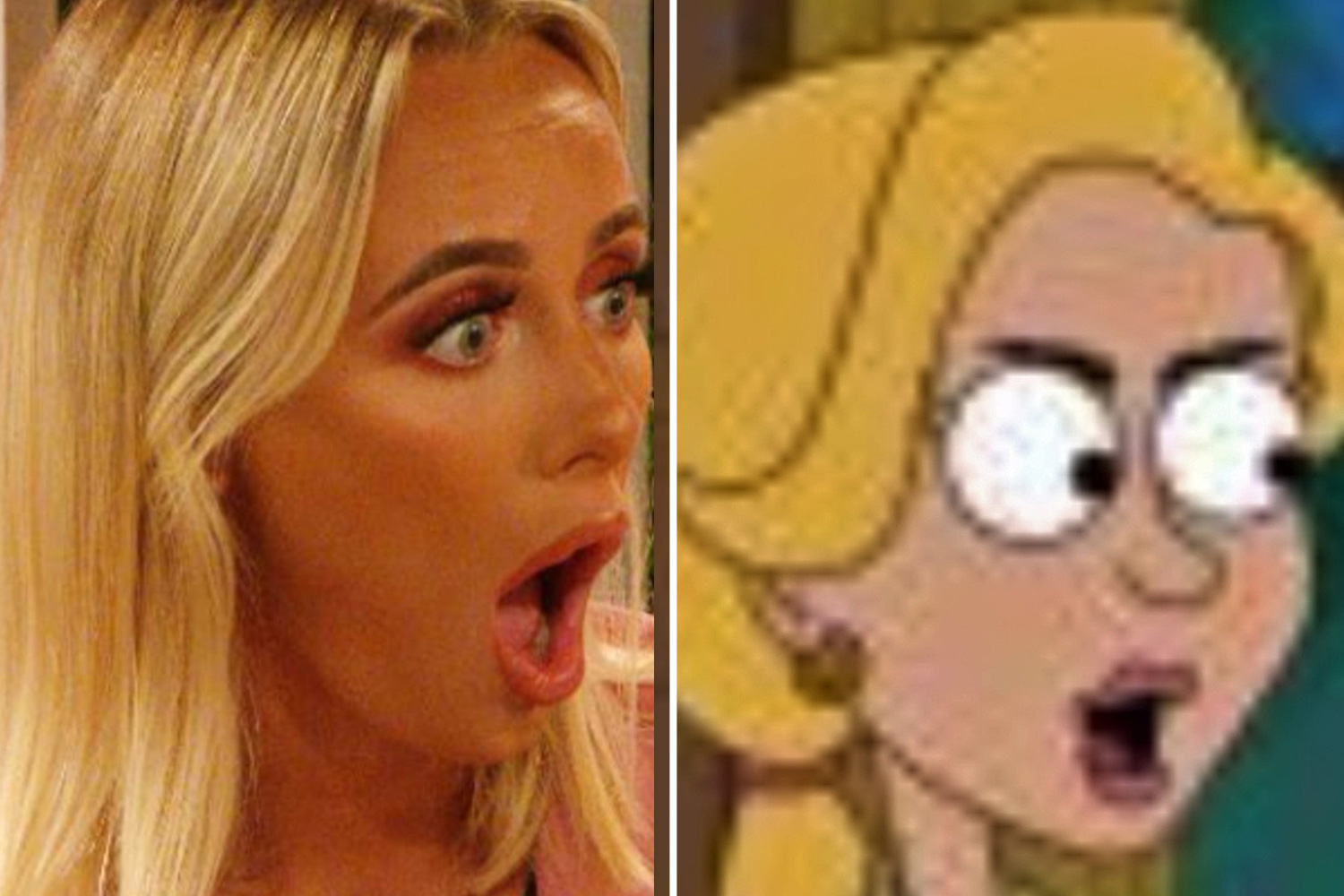 THIS week’s winner is Millie Court, from Love Island, and Ethel Anderson, from Brickleberry. Sent in by Connor David.
Picture research: AMY READING

LATE Night Mash managing to discuss the Afghanistan withdrawal without a single barb or joke being aimed at Joe Biden.

SAS: Who Dares Wins drowning in its own sob stories. Roly-poly Nick Knowles, 59, wearing an Alice band on Catchphrase.

The One Show trying to persuade viewers that Vigil is “an underwater Line Of Duty”. (Please).

And Channel 5 following up John Wayne’s The Alamo and Ben-Hur with an hour and a half of Britain’s Favourite Sandwich.

All of the worthy winners at our Who Cares Wins awards showing Kate Winslet and the dressing-up box community how short and gracious acceptance speeches should be made, on Channel 4.

Martin Clunes reprising his role as DCI Colin Sutton on Manhunt: The Night Stalker, even if ITV’s obsession with real-life serial killers and rapists is getting a bit weird.

And Bake Off master-creation Jurgen, the trombone-playing German, listening patiently to Matt Lucas singing The Flintstones theme tune, in his native tongue, before flattening him with the verdict: “Hmmm. I can’t quite remember the text.”

A lovely bit of telly.

KAVEH SOLHEKOL: “The agent sent me a three-word message.“That message is, ‘The deal is off.’ ”

Clinton Morrison: “That header was literally the last kick of the game.”

Darren Bent: “I won’t say ‘won’t’, but he won’t have another season like that.”

FILTH Corner. King James McFadden: “Tonight, it worked because Adams and Dykes had a relationship.

"They were close together. When one went short, the other held their length.” 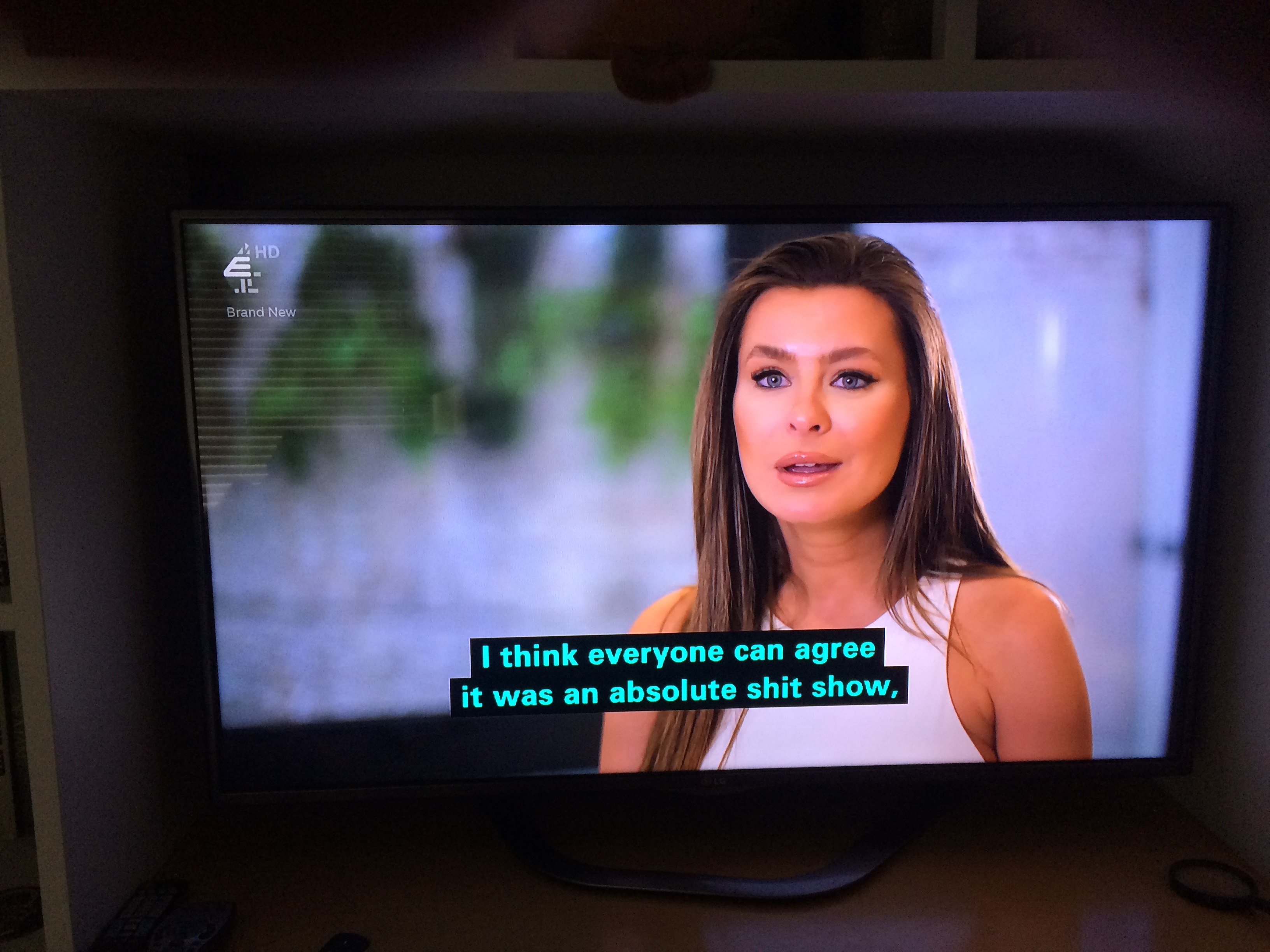 RATHER than burden you with several hundred words, I’m going to let this subtitled quote from contestant Tayah sum up the full worth of E4’s Married At First Sight UK.

IT wasn’t unexpected, but the sad death of Jimmy Greaves still stopped me in my tracks on Sunday morning.

Mercifully, I’m too young to have witnessed the bold young Jimmy dismembering Scotland in 1961, news footage of which, I was alarmed to discover, still has the power to make me flinch and shout: “****ing TACKLE HIM!”

I rarely missed an episode, though, of Saint & Greavsie, an ITV show that worked like a dream because the hosts and production team understood a simple truth about their subject.

Footballers are neither the devils of yesteryear, nor the halo-topped social justice warriors some would have you believe they’ve all become today.

Like the magician himself, they’re just ordinary blokes playing a funny old game.

Both Jimmy and his show will be missed for ever.

YOU know how I’ve always maintained every series of Celebrity MasterChef goes on far too long?

2021 finalist Joe Swash said: “I reckon this has knocked five years off my life already.”

So this one must run and run.

Tags: deffo, Giving, me, Strictly, Woke
You may also like
Celebrities News