Why Kazakhstan uprising will strike fear in Putin: Protests against another of Vladimir’s allies show citizens of former Soviet nations are ready to rise up after decades of suppression

A Moscow-led military alliance dispatched troops to help quell mounting unrest in Kazakhstan on Thursday, amid fears from the Kremlin over what example the toppling of the country’s government could set for other former Soviet republics.

Long seen as one the most stable of the ex-Soviet states of Central Asia, energy-rich Kazakhstan is facing its biggest crisis in decades after days of protests over rising fuel prices escalated into widespread unrest.

One of five ex-Soviet nations in the region, Kazakhstan is of crucial importance to Russia as an economic partner and home to a large ethnic Russian population.

While Russian propaganda will likely blame foreign meddling, experts have claimed that President Vladimir Putin will fear that the protests in Kazakhstan are the latest signal that citizens who have spent decades living under autocracies in the shadow of the former Soviet Union are reaching their breaking point.

President Kassym-Jomart Tokayev tried to head off further unrest by announcing the resignation of the government headed by Prime Minister Askar Mamin early on Wednesday, but protests continued. Thousands have been injured or killed.

Tokayev is the chosen successor to Putin ally Nursultan Nazarbayev, a statue of whom was toppled by an angry mob on Thursday. Nazarbayev, 81, is believed to have fled to Russia, with reports saying he was rescued by military plane. 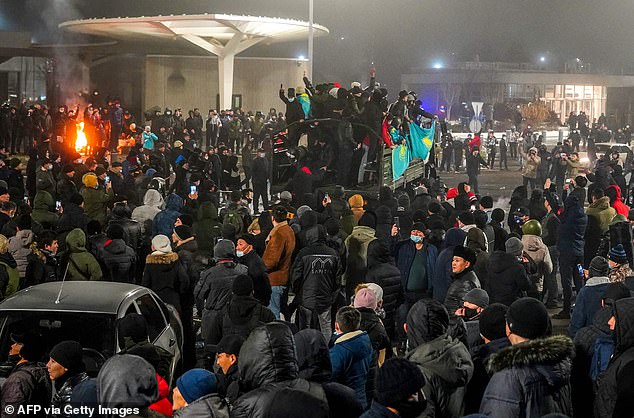 Protesters take part in a rally over a hike in energy prices in Almaty on January 5, 2022. A Moscow-led military alliance dispatched troops to help quell mounting unrest in Kazakhstan on Thursday 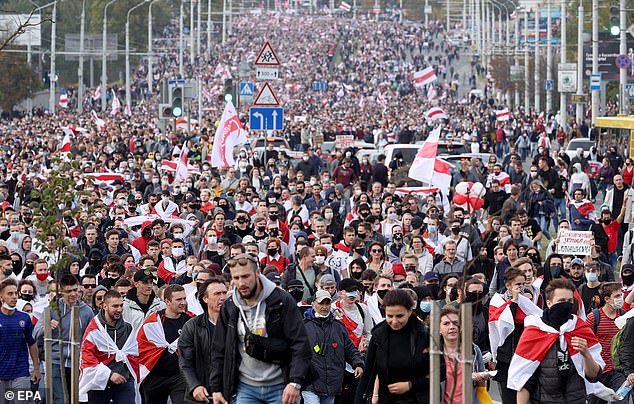 The significance of the staute of Nazarbayev – the self styled ‘Father of the Nation’ – being toppled on Thursday will not have gone unnoticed in Moscow.

‘It is absolutely not in Putin’s interest to have this blow up in his backyard when he’s in the middle of a showdown with Nato,’ Eugene Rumer – an author and former national intelligence officer for Russia and Eurasia at the U.S. National Intelligence Council, told the Financial Times.

Moscow called for a ‘peaceful solution… through dialogue, not through street riots and violation of laws.’

Similar revolts were seen in Ukraine and Georgia the early 2000s, pushing the countries further towards Western relations. Both have actively sought Nato and EU membership – the stuff of nightmares for Putin.

Since then, Moscow has exercised military strength against both nations, with around 90,000 troops currently amassed on Ukraine’s border raising fears of a full-scale military invasion of the country.

In doing so, political rival Sviatlana Tsikhanouskaya was sent into exile. 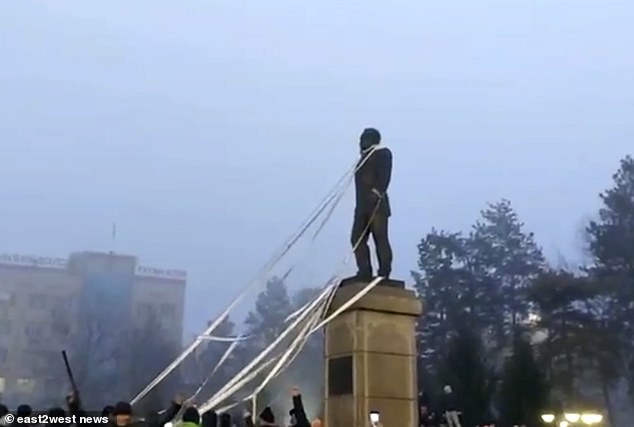 Kazakhstan’s president Tokayev is the chosen successor to Putin ally Nursultan Nazarbayev, a statue of whom was toppled by an angry mob on Thursday (pictured) 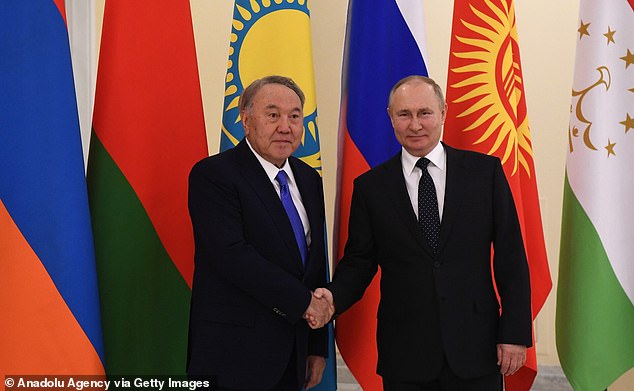 Russian President Vladimir Putin (right) poses for a photo with Founding President of Kazakhstan Nursultan Nazarbayev (left) at the informal summit of leaders of Commonwealth of Independent States on fighting the COVID-19 pandemic in St. Petersburg, December 28, 2021

In addition to Putin giving his blessing to Lukashenko’s brutal crackdown on dissidents, the Russian strongman has also quelled any political opposition at home.

Before the end of the 2021, he shut down Russia’s most prominent civil rights group Memorial, and at the beginning of the year imprisoned leader of Russia’s opposition Alexei Navalny, who was also poisoned in 2020.

However, the issues in Kazakhstan that have led to the unrest are largely domestic, with the The cause of the unrest being a spike in prices for LPG in hydrocarbon-rich Mangystau.

Much of the anger appeared directed at Nazarbayev, who is 81 and had ruled Kazakhstan with an iron fist since 1989 before handing power to Tokayev.

Many protesters shouted ‘Old Man Out!’ in reference to Nazarbayev.

Even if Kazakhstan’s government were to completely fall, the country is unlikely to entirely slip out from under the influence of Moscow, although Russia will be concerned about pet projects such as the Eurasian Economic Union.

Russia itself will unlikely be threatened by the chaos across the border. 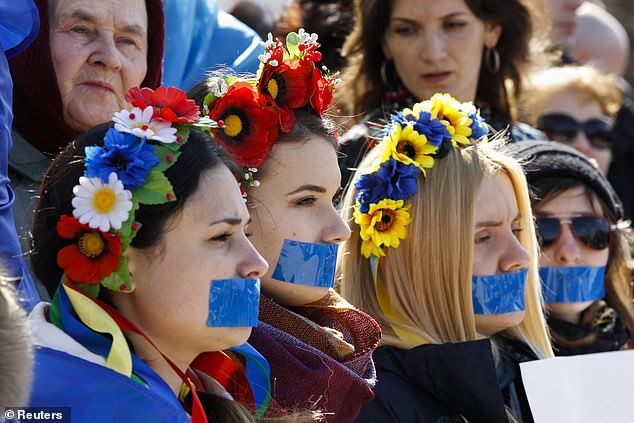 Women with their mouths taped over attend a pro-Ukraine rally in Simferopol March 13, 2014 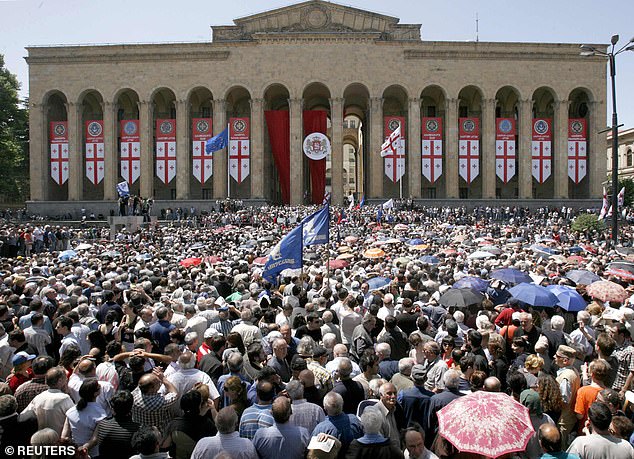 Opposition coalition supporters hold a rally in central Tbilisi, Georgia in May, 2008

Putin has built deep-rooted defences against any uprising at home, demonstrated by his ruthlessness in dealing with supporters of Navalny, and Navalny himself.

However, according to The Telegraph, some pro-Kremlin media outlets were likening the situation in Kazakhstan to a ‘Maidan’ – a reference to Ukraine’s revolution that in Putin’s eyes was the result of foreign interference.

The Russian oligarch will keeping a close eye on Kazakhstan as events unfold.

With protests escalating, Kazakhstan’s government late on Wednesday said a state of emergency declared in protest-hit areas would be extended nationwide and in effect until January 19.

Within hours the alliance said the first troops had been sent, including Russian paratroopers and military units from the other CSTO members. 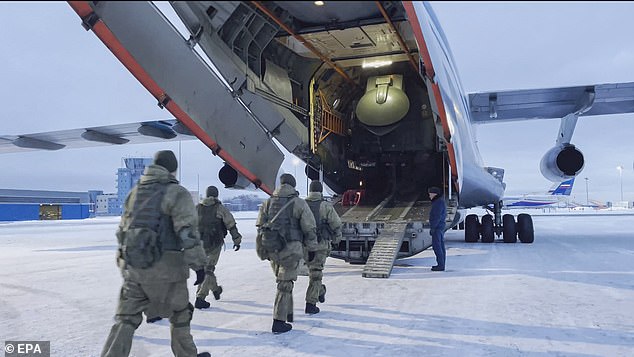 still image taken from a handout video made available by the Russian Defence Ministry’s press service shows Russian servicemen boarding a military aircraft on their way to Kazakhstan, at an airfield outside Moscow, Russia, January 6, 2022

‘Peacekeeping forces… were sent to the Republic of Kazakhstan for a limited time to stabilise and normalise the situation,’ the CSTO said in a statement, without specifying the number of troops involved.

In the worst reported violence so far, police said dozens of people were killed in battles with security forces at government buildings in the country’s largest city Almaty.

The European Union and the United Nations called for ‘restraint’ on all sides, while Washington urged authorities to allow protesters to ‘express themselves peacefully.’

Spontaneous, unsanctioned protests are illegal despite a 2020 law that eased some restrictions on freedom of assembly.

Smaller rallies had been staged in cities across the republic from Sunday, beginning with the town of Zhanaozen in Mangystau.

The initial cause of the unrest was a spike in prices for LPG in hydrocarbon-rich Mangystau.

Reports by independent media suggested that Tokayev’s announcement of a new price of 50 tenge (11 US cents) per litre, down from 120 at the beginning of the year, failed to weaken the rallies in Zhanaozen and Mangystau’s capital Aktau as demonstrators aired new demands.

Five things to know about Kazakhstan

With dozens reported dead in the worst unrest in energy-rich Kazakhstan in decades, we look at what had been one of the most stable and tightly controlled of the former Soviet republics in Central Asia.

Former Communist Party boss Nursultan Nazarbayev, now 81, ruled the vast steppe land with an iron fist for years from independence in 1991. He was still reportedly pulling the strings after he finally stepped down in 2019 to make way for his anointed successor, President Kassym-Jomart Tokayev.

A key Russian ally, the country has never had a free election.

Known for its futuristic skyline of skyscrapers and chilly winter temperatures that regularly plunge below minus 20 degrees Celsius (minus 4 degrees Fahrenheit), an observation tower at its centre is topped with a viewing platform where visitors can place their hands on a gold imprint of Nazarbayev’s palm.

The vast Kazakh steppe is home to the Russia-leased Baikonur cosmodrome – still the world’s biggest launch pad nearly 60 years after Soviet cosmonaut Yuri Gagarin blasted off from there to become the first man in space.

Kazakhs may make up nearly 70 percent of the population (2020) but historically the country has had a large Russian minority.

Russians made up more than 40 percent of its people in the 1970s but their numbers have since fallen back to one in five of the population.

Officially home to 130 nationalities, many were deported there in Soviet times as political prisoners, with German, Greek, Tatar, Polish, Korean, Ingush and Georgian Turk communities springing up across the steppe.

Kazakhstan is proud of its nomadic history and marked 550 years since the birth of the first Kazakh state in 2015.

The celebrations followed controversial remarks by Russian leader Vladimir Putin, who said that Kazakhs had never had a state prior to independence from Moscow.

While Kazakhstan and Russia traditionally enjoy strong relations, their shared history sometimes gets in the way.

Russia criticised a 2019 Kazakh documentary which claimed that the forced collectivisation of the country resulted in genocide, with up to 40 percent of the population either dying in famines or fleeing in the 1930s.

Kazakhstan is Central Asia’s biggest economy which has in the past seen double-digit growth. But it was hit hard by a 2014 plunge in oil prices on which it is heavily dependent.

It was also affected by the 2008 economic crisis in Russia, which led to a devaluation of the Kazakh currency, the tenge.

Oil accounted for 21 percent of the country’s Gross Domestic Product in 2020, according to the World Bank, which predicts the economy will grow by 3.7 percent this year.

The country’s main oilfield Tengiz produces a third of Kazakhstan’s annual output and is 50-percent controlled by US firm Chevron.

The world’s biggest producer of uranium, Kazakhstan is also overflowing with manganese, iron, chromium and coal.

Kazakhstan has linked the future of its economy to neighbouring China, investing heavily in its road network, railways and port infrastructure to facilitate trade links.

For all the petrodollars the resource-rich state has invested in image promotion, Kazakhstan is still dogged by Borat.

Many beyond its borders continue to associate the country with British comedian Sacha Baron Cohen’s 2006 outrageous hit mockumentary Borat.

He reared his head again in 2017 when Baron Cohen offered to pay fines for Czech tourists detained by Kazakh police after they posed for photos in the capital wearing Borat-style ‘mankinis’.