Bali is welcoming foreign tourists but the only plane that’s been sighted lately is perched atop a cliff over Nyang Nyang beach at the southernmost tip of the island.

Felix Demin, a Russian hotel developer, had the retired Boeing 737 hauled there last month, planning to make it a new attraction when overseas tourists begin trickling back to Indonesia’s holiday mecca. 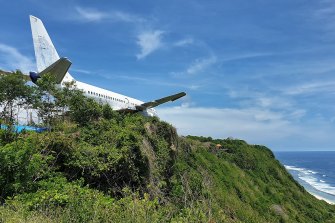 But the crowds are yet to materialise, even though Bali opened up this week.

Governor Wayan Koster fronted a press conference late on Thursday at an empty Ngurah Rai International Airport in Denpasar to formally announce the province’s invitation to visitors from 19 countries after effectively being shut down to international tourism for 18 months.

He said there were 20,000 hotel bookings from November onwards. The only issue is there are no international flights back to Bali yet.

“Now that it is official, the foreigners will have more certainty and hopefully, the number of bookings will increase,” he said. 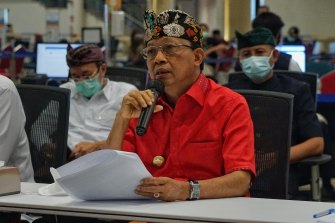 “We hope by the latest, late October, there will be flights to Bali.”

Quarantine for fully vaccinated arrivals has been reduced from eight days to five days in a bid to lure back international tourists, who will be able to get around their hotel rather than be confined their room.

Authorities are also taking other steps to entice both travellers and airlines.

“We will provide entertainment for those waiting for their PCR test at the airport, like dances,” said Herry A.Y Sikado, the general manager at the airport.

“We specifically offered incentives to airlines by offering free landing fees to all airlines soon to be operating in Bali. We will not be charging a landing fee, which the airlines positively welcomed.”

The Indonesian government hasn’t planned for Australian travellers being in the initial intake because of Canberra’s tight border controls and Qantas, Virgin Australia and Jetstar have only announced they are resuming flights to Bali from late March next year. But officials are eager to have Australians back and NSW Premier Dominic Perrottet’s shock lifting of all quarantine for fully vaccinated arrivals in Sydney from November 1 may well fast track their return.

In the meantime, Bali’s provincial government anticipates China and India as the main sources of foreign tourists and is hoping between 4000 and 5000 will arrive per week once flights resume.

The island’s leaders are under instruction from Jakarta to transition cautiously even with Bali’s full vaccination rate above 70 per cent. The world’s fourth largest country has just emerged from a surge of the virus in which cases climbed to more than 56,000 a day and daily deaths were over 1000 for more than a month. There are concerns as well about a third wave of COVID-19 at the end of the year in Indonesia, which remains vulnerable with less than a quarter of the population double dosed.

Business owners, though, are desperate to have foreign tourists back after the financial pain wrought by the pandemic. 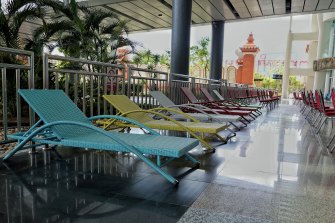 Pool chairs laid out at the airport to accommodate tourists as they arrive and undergo PCR testing.Credit:Amilia Rosa

Made Sudarmika, the general manager of the famous Made’s Warung eateries and hangout spots, argues even five days’ hotel quarantine is too much.

“Everybody is struggling,” he said. “The domestic tourists have helped us bounce back a bit but we are still scaling down our operation. No surviving business currently in Bali is operating at full capacity.

“Now we are finally reopening but with such short notice. They should give people a few months to prepare [their holidays], not announce it the night before and expect tourists to fly in the next day. 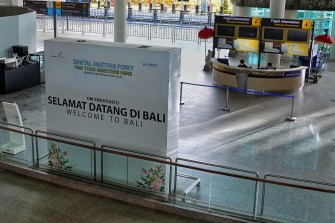 There are others who are more supportive of the cautious approach.

Made Merta, who runs the five-star Merusaka Nusa Dua, one of 35 hotels approved for quarantine, believes it is a necessary evil.

“We need to look at the big picture. We also need to save our nation, our people,” he said. “Businesses need to benefit but our people need to be protected too. We can’t just have people come in and ignore all health protocols.

“We have bookings in already for Christmas and New Year, about 25 percent already. We have Russians, Europeans, [tourists from] Uzbekistan. The Russians especially, their length of stays are usually around three weeks, so even with five days quarantine, they still have plenty of days to holiday after.”

Luh Putu Wena Widiarty, the general manager of the four-star Aveda hotel in North Kuta, said accommodation was being offered at half its pre-pandemic price, with operators aware of the possibility of being forced to close again if cases rise sharply again.

“We need to gain trust from the other countries that we can handle the pandemic,” she said.

Tags: Are, Bali, he'll, La, the, Where, Ya
You may also like
Celebrities News