Britain expects at least another six months of Covid chaos: Just 7% of adults now expect life will be back to normal by the summer, data reveals

Fewer than one in 10 Britons believe life will revert back to normal by next summer, according to official data.

Polling by the Office for National Statistics revealed just 7 per cent of adults think pre-Covid normality will resume by June.

For comparison, the equivalent figure stood at 28 per cent when asked last winter, just days before strict lockdown curbs were introduced to tackle the second wave.

The findings highlight the fears Britons have about Omicron, with ministers facing pressure to bring back tougher restrictions to curb its rapid spread.

The ONS quizzed more than 3,000 people during the first two weeks of December, shortly after the mutant variant was first identified.

It was also when Boris Johnson confirmed he would resort to Plan B, including work from home guidance, compulsory face masks in more places and the Covid pass for large events.

Younger people, Londoners and men were more optimistic about the virus having little impact on life in six months time, while the over-70s, those from the north were less hopeful. 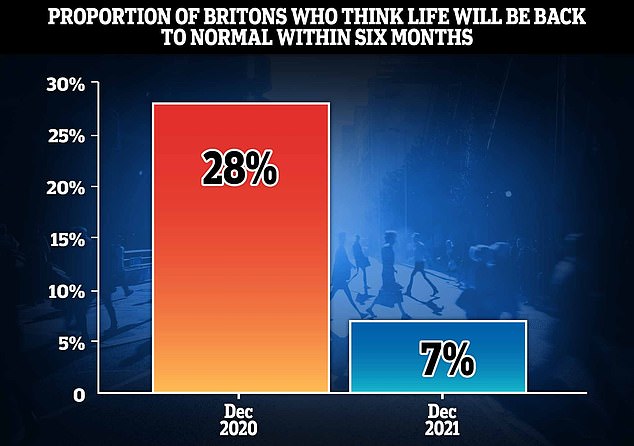 A survey of more than 3,000 Britons by the Office for National Statistics found just seven per cent of adults believe there will be a return to normality within the next six months, a quarter of the 28 per cent of people who believed this to be the case when asked last winter

Britain can expect another 18 months of potential Covid misery until a vaccine that protects against all variants is developed and rolled out, Chris Whitty warned today.

The chief medical officer said he expects a universal jab that can fight multiple strains to be ready at some point in mid-2023 as well as several new antiviral drugs, which should do the ‘heavy lifting’ for the NHS.

But he admitted that in the meantime, ministers will have to rely on social restrictions when vaccine-resistant variants like Omicron threaten to overwhelm the health service.

Speaking to MPs on the Health and Social Care Select Committee, Professor Whitty said: ‘If I project forward, I would anticipate in a number of years, possibly 18 months, possibly slightly less… we will have polyvalent vaccines which will cover a much wider range [of variants].

‘And we will probably have several antivirals… and a variety of other countermeasures that mean that the great majority, and probably almost all of the heavy lifting, when we get a new variant, unless it is extremely different, can be met by medical means.’

It comes after England’s chief medical officer Professor Chris Whitty warned Britons should expect another 18 months of Covid interfering with their lives.

He told MPs it would take that long for a combination of both vaccines and drugs to be able to bring new variants under control.

Ministers have not ruled out further restrictions or a lockdown in England, with fears growing that a lockdown could be around the corner.

Other parts of the UK are already being given stricter guidance, with Scotland’s First Minister Nicola Sturgeon advising that people don’t mix with more than two other households at a time.

And Wales’ leader Mark Drakeford said nightclubs would close in the country after December 26 to manage the ‘storm of Omicron’.

Of the 3,276 people who completed the ONS survey, just seven per cent of adults said they expect life to return to normal in less than six months.

For comparison, 28 per cent of adults felt life would return to normal in six months or less when asked between December 2 and 6 last year.

The data revealed just nine per cent of 16 to 29-year-olds believed Covid would no longer be affecting daily life in six months.

Eight per cent of men thought life would be back to normal by spring, compared to five per cent of women.

And one in 10 Londoners said Covid would no longer be affecting daily life in that timeframe, compared to just four per cent of people in the North East, North West and Yorkshire and Humberside.

And just six in 10 people said they expect a return to normality in the next 12 months, down from eight in 10 people last year.

Some 14 per cent of people said they never expect life to return to normal.