COVID-19 antiviral drugs have been made available to more people. What are they? And who’s eligible to take them?

Some 73,000 Australians with COVID were given these medications when they had mild to moderate illness and were at a high risk of developing severe disease.

Now, a broader range of people are eligible to access them with a prescription from their GP.

What exactly are the drugs? And how do they work? 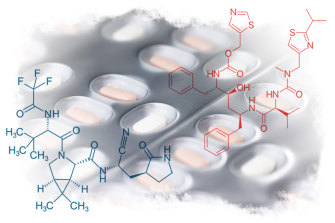 Antivirals are a class of drugs that help the body fight certain viruses that can cause disease. They can prevent severe symptoms and lower the rate of transmission.

The science behind antivirals is not new. The first antiviral drug approved by the US Food and Drug Administration, idoxuridine, was developed in the 1950s by pharmacologist William Herman Prusoff. Back then, the drug was used to treat the herpes virus. Prusoff also co-developed one of the earliest antiviral AIDS drugs.

“Antiviral science has come a long way,” says Associate Professor Stuart Turville, a virologist with the Kirby Institute at UNSW, who was one of the first Australians to isolate the Omicron variant in lab studies, and who has researched HIV. “We’ve got antiviral drugs now that can cure Hepatitis C. HIV has become so manageable with antivirals that it can even prevent transmission,” he says.

Today antivirals are used for influenza, herpes-simplex, HIV, hepatitis B, hepatitis C and some viruses that cause eye infections and warts. Antivirals can be administered by pill, intravenous drip, injection, eye drops or topical ointments and creams.

What are the COVID antivirals?

Antivirals are being developed around the world in a bid to combat the effects of COVID, but, for now, two antiviral pills have been approved for sale on the Pharmaceutical Benefits Scheme (PBS): Paxlovid, developed by Pfizer, and Lagevrio by Merck. The former government ordered 1.3 million courses of antivirals – 1 million Paxlovid and 300,000 Lagevrio.

Paxlovid is a three-dose medication made up of two “protease inhibitors”, nirmatrelvir (two tablets) and ritonavir (one tablet). Nirmatelvir stops the SARS-Cov-2 virus replicating inside the body’s cells, while ritonavir prevents the nirmatrelvir from breaking down in the liver so it can work for longer.

The combination of two protease inhibitors is what makes the medication effective, says Jonathan Baell, a medicinal chemist and research professor in medicinal chemistry at the Monash Institute of Pharmaceutical Sciences. “Viral proteases are very important for survival of a virus and are essentially enzymes that ‘cut’ a larger protein into smaller proteins that are more useful to the virus for survival and replication,” says Baell. “It would make sense to include two protease inhibitors in the same treatment because the chance of a virus becoming resistant to both simultaneously is much smaller than if just one protease was targeted.”

In clinical trials, Pfizer reported that Paxlovid was 89 per cent effective in reducing the risk of hospitalisation and death among people with COVID-19 who were at high risk of severe illness when they were treated within five days of the onset of symptoms. The trial happened before the Omicron variant. There is also some early real-world research from the US that suggests Paxlovid does offer some protection against severe disease and hospitalisation against Omicron in high-risk people, but a small proportion of these patients felt better after their dose only to find their symptoms bounced back.

Paxlovid is taken as three tablets twice a day for five days. Where side effects have occurred, they have included food or drink tasting different, diarrhoea, headache, nausea or vomiting.

Lagevrio is made of an antiviral originally developed to treat influenza, called molnupiravir. It works differently to Paxlovid. Instead of stopping the virus replicating, it copies a building block the virus uses and disrupts the function of the virus. It was the first COVID anti-viral pill approved by the Therapeutic Goods Administration for use back in January.

“It can be considered to be a silent assassin,” says Baell, “as it tricks another viral enzyme called an RNA polymerase that thinks it is an RNA building block and incorporates it into viral RNA – because this is what this enzyme does: replicates viral RNA as part of the viral expansion process. But the resulting viral RNA containing molnupiravir is fatally flawed and eventually does not work as it should, causing replication to halt.”

Merck’s Lagevrio pill was initially reported as having 50 per cent efficacy against hospitalisation and death; that number has since dropped to 30 per cent after further studies.

Lagevrio is taken as four pills every 12 hours for five days. In a clinical trial, a small number of people reported mild or moderate diarrhoea, dizziness and nausea.

When do you take them?

Both pills must be taken within the first five days of when a person begins developing symptoms (or, for asymptomatic adults 70 years or
older, as soon as possible after diagnosis is confirmed). This has led Australian Medical Association vice president Chris Moy to urge anyone with COVID-19 risk factors to get a PCR test at the first sign of any COVID symptoms, such as a runny nose or sore throat, to ensure they’re able to start taking antivirals promptly. “They do make quite a big difference, but they have to be given early,” he said.

Who is eligible for them?

Anyone over 18 who is immunocompromised, including those with a disability and cancer patients, can also get a prescription.

Eligible Australians can now request a prescription from their GP. The cost is about $40 per script and $6.80 for those with a concession card.

Who shouldn’t take them?

If you are pregnant, breastfeeding or trying to conceive you should not have oral COVID-19 treatments as there are no clinical studies to show whether there could be adverse effects.

It is also recommended that women should use effective birth control while taking either Lagevrio or Paxlovid for four days after stopping if there is a possibility of them getting pregnant.

Paxlovid is also not recommended for people with severe kidney or liver disease.

“Each antiviral has its own pros and cons,” says Professor Craig Rayner, a clinical pharmacologist and medicine developer at drug company Certara, who has advised on COVID therapeutics to organisations including the World Health Organisation. “Ritonavir in Paxlovid boosts the levels of its COVID-active component, nirmatrelivir, by blocking its metabolism in the liver [but] it can also impact certain other medications patients might be taking, making it important to manage patient’s medications and other conditions carefully.”

In the United States, the Food and Drug Administration authorised pharmacists to prescribe antivirals to at-risk people. New Zealand has also given pharmacies the green light although only after consultation with a pharmacist who has had training.

But in Australia, you must have a prescription from your GP. It’s important to speak with your doctor, says Karen Price, president of the Royal Australian College of General Practitioners and an adjunct professor from Monash University. “GPs are the key to safely prescribing these treatments. We have a strong and, in many cases, longstanding connection with our patients, we know their health history, including existing health conditions or other factors which may impact their eligibility for these medicines, such as plans to become pregnant.”

Can I take COVID antivirals if I’m not immunocompromised?

“Whilst it is still reasonable to expect some benefit in otherwise healthy patients, based on the current evidence, people who should get antivirals first are those at higher risk for serious illness, who have the highest potential to benefit,” he says.

“We don’t have the luxury of many different types of antivirals. We need to be cautious in how we apply them. There is a paradox: the greater the use, the greater the risk the virus can become resistant to the drug, the faster we lose them.”

He also stresses that the earlier patients start on an antiviral, the greater the benefit. “We should be focused on getting the right type of patient access to antivirals as quickly as possible.”

Does this mean we don’t need vaccines?

No. Antivirals are no replacement for vaccines.

“These medicines are not a replacement for COVID-19 vaccines,” says Price. “Vaccination is our best protection against this virus, and I urge people to make sure they are up to date with their COVID-19 vaccinations.”

Rayner adds: “We need to expect nature to be smarter than we are, that’s why we need more tools to manage the virus, including vaccines and multiple antivirals.”

If you'd like some expert background on an issue or a news event, drop us a line at explainers@smh.com.au or explainers@theage.com.au. Read more explainers here.