The original black-and-white film footage was shot by Australian zoologist David Fleay in 1933, just years before the species went extinct.

The footage has now been colourised overseas and was released on Tuesday by the National Film and Sound Archive of Australia (NFSA).

Today marks 85 years since the animal died and the day the species was declared extinct.

Benjamin is said to have died from exposure.

The footage was also released to coincide with National Threatened Species Day, September 7, to raise awareness of other flora and fauna that are endangered or at risk of extinction.

The NFSA commented that there were less than 12 original films of the Tasmanian Tiger, amounting to around three minutes of footage without sound.

‘It’s a painstaking process that employs a lot of subjectivity and own personal creativity to be able to interpret a lot of different facets of history,’ the NFSA’s curator Vick Gwyn said. 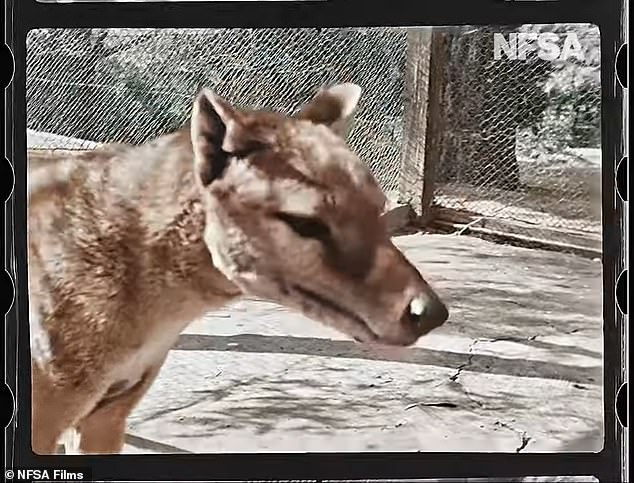 The last-known Tasmanian Tiger, Benjamin (pictured), has been given a new life as original film of the animal is colourised by international film experts

‘By using a lot of secondary and primary records, and looking at amazing 3D renders of this creature, the team can employ that historic sleuth work and re-imagine the colour.’

Samuel François-Steininger, one of the colourisation experts who worked on the project, stated that they relied on written description of the animal in order to get the colouring right as there was a severe lack of archive footage.

‘These descriptions, combined with scientific drawings, and recent 3D colour renderings of the animal, meant we were able to get a clear idea of what the thylacine’s fur should look like,’ Mr François-Steininger said.

‘I have worked on more than 100 archive-based documentary films and series, most of them very complex,’ he remarked.

‘For the thylacine, I faced a different kind of challenge and responsibility: I had to take care of the rare footage, and pay tribute to the last representative of a species, which disappeared 85 years ago.’

Ms Gwyn stated that the newly released footage shows how rare the creature was, saying how sad it is that they are now extinct. 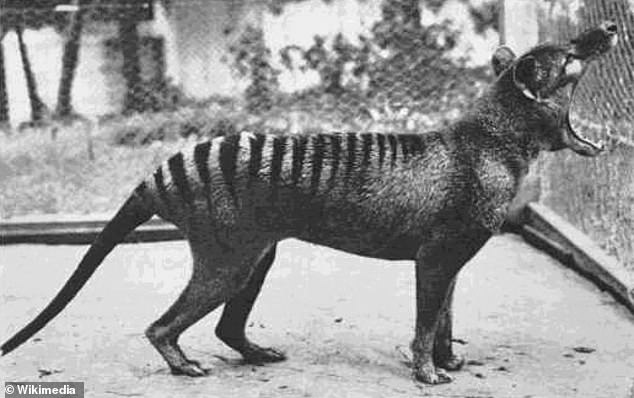 Benjamin (pictured) was shot on film in 1933, just years before he died in captivity rendering the species extinct

‘I think most people will be very familiar with footage of this amazing creature pacing around what looks like a very austere concrete slab enclosure in Hobart,’ Ms Gwyn said.

The Thylacine were large carnivorous marsupials that are now believed to be extinct. They were the only member of the animal family Thylacinidae to survive into modern times and is more commonly known as the Tasmanian Tiger or the Tasmanian Wolf.

It was estimated they had a population size of around 5,000 at the time of the European settlement. 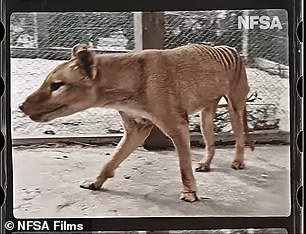 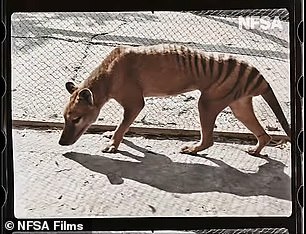 NFSA’s curator Vick Gwyn stated that the new footage shows just how rare the species was. The new footage was released on the 85th anniversary of Benjamin’s death; National Threatened Species Day

A boom in the dingo population, rising sea levels, destruction of habitat and over-hunting are all theories that have been put forward as to why the species died out so rapidly.

While the species has been classified as extinct since the death of Benjamin in 1936, there are still some who have unsuccessfully tried to prove that Tasmanian Tigers still exist.

A video posted to YouTube in February 2021 by the president of the Thylacine Awareness Group of Australia (TAGOA) Neil Waters showed handheld footage of what appeared to be Tasmanian Tigers in the wild.

However, these claims were soon labelled as ‘ambiguous’.

Similar footage was released in 2016 and again in 2017 where the TAGOA dispelled more claims that people had spotted a Tasmanian Tiger in the wild. 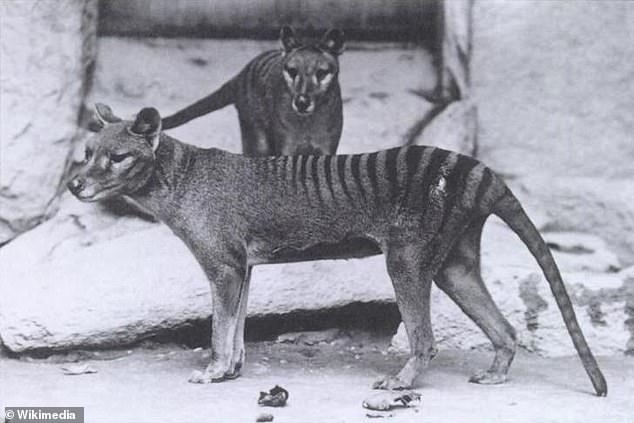 While the species has been labelled extinct since Benjamin’s death in 1936, there are still some who have unsuccessfully tried to prove they still exist

Tags: colourised, new, of, video, Watch
You may also like
Celebrities News