The plan was accidentally revealed by a Kremlin puppet parliament, which said Moscow will confiscate crops from farmers to help stock stores across Russia.

It will revive the horrors of Ukraine’s Holodomor, or ‘hunger extermination’, when Soviet dictator Joseph Stalin stole food to create the 1932-1933 famine, killing at least four million people.

In a now-deleted statement, pro-Putin regional politician Vladislav Zyryanov said the Kremlin wanted ‘to increase the volume of supplies for domestic Russian consumers by moving food from other southern [Ukrainian] regions taken under its control’.

Zyryanov, who chairs the agriculture committee in the Krasnoyarsk regional assembly in Siberia, called the move ‘economically justified, given the withdrawal of many suppliers of seeds and fertilisers from the Russian market’. 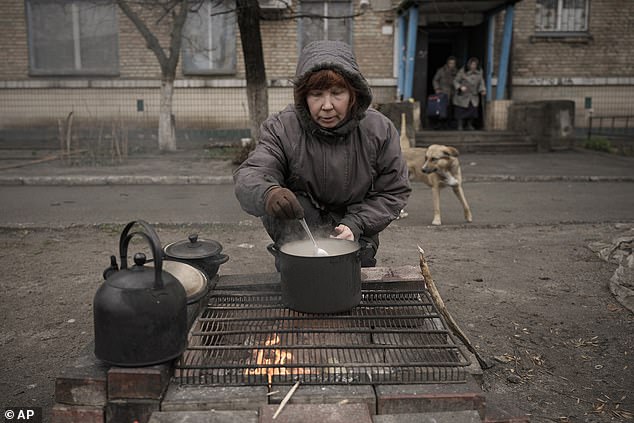 A woman cooks on an open fire outside an apartment building which according to residents has no gas, water, electricity and heating for more than a month in the formerly Russian-occupied Kyiv suburb of Bucha, Ukraine

He suggested other regions across Russia will be able to ‘successfully implement’ similar policies to address the nation’s food supply woes.

His remarks are the first time any Russian official has openly admitted Russia wants to steal Ukrainian farm produce. They also amount to an unprecedented acknowledgement by Putin’s United Russia party of the biting effect from sanctions imposed by Britain and its Western allies.

Zyryanov’s statement was hurriedly taken down from the Krasnoyarsk assembly’s website late on Wednesday.

Both the UN and EU have accused Russia of using hunger as a weapon of war by bombing food stocks and blocking deliveries of humanitarian supplies. It is why the record-breaking Mail Force Ukraine Appeal and the Ukrainian Embassy in London are sending 500,000 boxes of food aid worth £8million to end the suffering of Ukrainians. Kherson’s highly productive and lucrative agriculture industry is one of the reasons why Ukraine is referred to as the world’s bread basket.

In the admission, desperate Siberian MPs said the move to steal Ukrainian ‘crop surpluses’ was necessary due to ‘the lack of other vegetables and grain crops’ in the eastern Russian region.

But they added that foreign sanctions had created similar shortages ‘everywhere at the federal level’. Albert Cherepakha, owner of two major farming businesses in Kherson, described how his firms have been seized by ‘groups of armed Chechens’. He said: ‘The gunmen said that from now on the company property belongs to them.’

He added his managers ‘were warned that they would be beheaded in case of any losses’. And Oleksandr Boyko, 23, a Kherson farm worker, said there had been ‘no significant excess production’ of vegetable, fruit and grain products.

The Ukraine Agri Council, representing Ukrainian farmers, said last night Russian invaders had started seizing grain from the Zaporizhzhia region. Ukraine’s food exports have slumped in the two months since the war started, causing prices to spike worldwide by at least 37 per cent, according to the World Bank.

Dr Samuel Ramani, a Russia expert at the University of Oxford, said regional MPs in Russia never ‘act out of lockstep’ with the Kremlin on issues of national security.

Just over two years ago, all 85 regional parliaments backed constitutional changes that will allow Putin to run again for presidency in 2024.

Dr Ramani said: ‘When a regional parliament is speaking, it is reflecting the Kremlin line and revealing Vladimir Putin’s true intentions in Ukraine. He sees this area and all of its resources effectively as an extension of Russian territory.

‘From his point of view, there is no difference between taking something out of Kherson or drilling for oil in Siberia.’

The Kremlin’s press office could not be immediately reached for comment.

Mail Force has raised more than £11million since the appeal launched days after the war began. It started with a £500,000 donation from DMGT, the Mail’s parent company, at the request of Lord and Lady Rothermere.

Readers of Mail Newspapers and MailOnline have always shown immense generosity at times of crisis.

Calling upon that human spirit, we are now launching an appeal to raise money for refugees from Ukraine.

For, surely, no one can fail to be moved by the heartbreaking images and stories of families – mostly women, children, the infirm and elderly – fleeing from Russia’s invading armed forces.

As this tally of misery increases over the coming days and months, these innocent victims of a tyrant will require accommodation, schools and medical support.

All donations to the Mail Ukraine Appeal will be distributed to charities and aid organisations providing such essential services.

In the name of charity and compassion, we urge all our readers to give swiftly and generously.

TO MAKE A DONATION ONLINE

To add Gift Aid to a donation – even one already made – complete an online form found here: mymail.co.uk/ukraine

Via bank transfer, please use these details:

TO MAKE A DONATION VIA CHEQUE

TO MAKE A DONATION FROM THE US

You can donate via CAF America at: https://donations.cafamerica.org/mail-force/

US readers can donate to the appeal via a bank transfer to Associated Newspapers or by sending checks to dailymail.com HQ at 51 Astor Place (9th floor), New York, NY 10003.

Checks in the US need to be made out to ‘CAF America’ and have ‘Mail Force Ukraine Appeal’ in the memo.