Viewers were baffled as Chancellor Rishi Sunak’s Budget folder appeared to change magically from red to green in a TV clip today.

As the Tory Cabinet Minister spent his first Budget speech in the job promising an action plan on coronavirus, those who tuned in to watch were left confused by an apparent change to the traditional colour.

When Mr Sunak left his car it appeared to be a bright green as opposed to the famous red to which the public is accustomed. 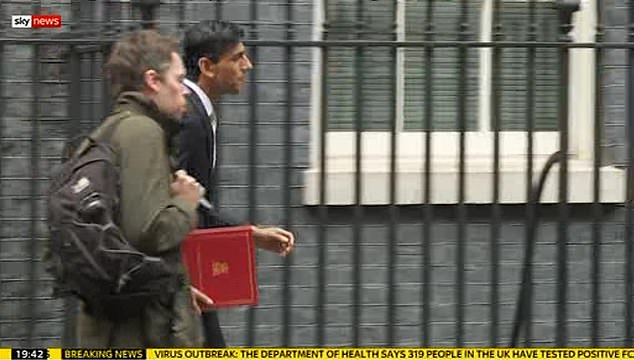 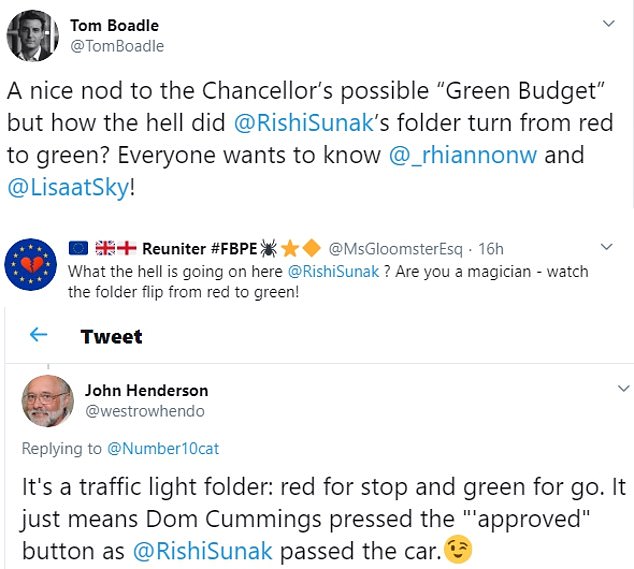 Social media users were quick to comment, with Tom Boadle tweeting: ‘A nice nod to the Chancellor’s possible “green Budget” but how the hell did @RishiSunak’s folder turn from red to green? Everyone wants to know.’

Jack Hillcox added: ‘The folder is turned, clearly by magic, from red to green… the colours of @YorkshireTea… what are you up to @RishiSunak?’

Dr Jennifer Cassidy tweeted: ‘As #Budget2020 is upon us, is it strange that I’m extremely preoccupied with the Chancellor Rishi Sunak magically changing folder colour. Watch closely.’

Twitter user @MsGloomsterEsq was more blunt and wrote: ‘What the hell is going on here @RishiSunak? Are you a magician – watch the folder flip from red to green!’

John Henderson said it might have something to do with Boris Johnson’s top aide Dominic Cummings, who is criticised for his supposedly tight grip on the party. 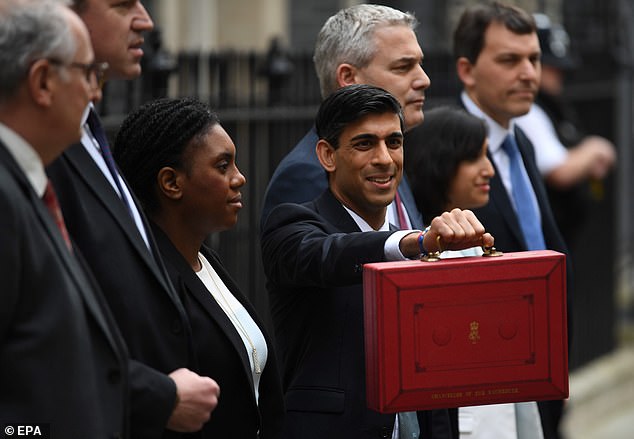 The strange sight came shortly before Mr Sunak said statutory sick pay will be available for ‘all those who are advised to self-isolate’ even if they have not displayed symptoms.

There will be reforms to the benefits system to make it easier to access funds will provide a £500million boost to the welfare system, along with a £500million hardship fund

The Chancellor told the Commons that the Government will meet the cost for businesses with fewer than 250 employees of providing statutory sick pay to those off work ‘due to coronavirus’. 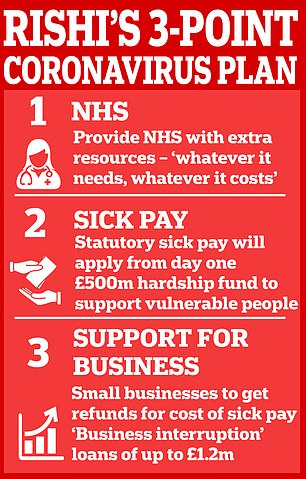 Mr Sunak said a ‘temporary coronavirus business interruption loan scheme’ will be introduced for banks to offer loans of up to £1.2million to support small and medium-sized businesses.

From the coming year the government will take the ‘exceptional step’ of abolishing business rates for businesses with a rateable value below £51,000.

Mr Sunak revealed that fuel duty will remain at 58p per litre for petrol and diesel – maintaining the freeze in place since 2011.

Despite speculation that he would ditch the framework on spending set by predecessor Sajid Javid, Mr Sunak said that his Budget is delivered ‘not just within the fiscal rules of the manifesto but with room to spare’.

The entrepreneurs’ relief tax break will be scaled back, saving £6 billion over the next five years.

But Mr Sunak said ‘most of that money’ will go back to firms through a series of other measures: increasing the tax break for research and development expenditure, the structures and building allowance and increasing the employment allowance by a third to £4,000.

Mr Sunak was walking the tightrope of showing the UK is prepared for the impact of coronavirus while also demonstrating the government is delivering on its domestic priorities.

Seeking to show the government is still determined to ‘level up’ the country after Brexit, Mr Sunak confirmed plans to invest ‘record amounts’ on improving the UK’s key infrastructure like roads, railways and broadband.

Some £600billion will be made available for the infrastructure war chest – treble the typical level of spending which will take public investment to its highest level since the 1950s.

A manifesto pledge to increase the threshold for paying national insurance is being honoured, giving 30 million workers an immediate tax cut of more than £100.

Alongside freezing fuel duty, £2.5billion will be made available to repair 50 million potholes over the next five years.

Tags: as, baffled, Rishi, Sunak, viewers
You may also like
Celebrities News