Victorian businesses are facing the toughest conditions of any of the states or territories, according to the latest research by NAB, but they are also the most optimistic in the nation.

The state’s peak small business group said on Tuesday that business confidence looked strong because it was “coming off a low base” and sentiment was vulnerable to the continued threats of border closures or fresh lockdowns. 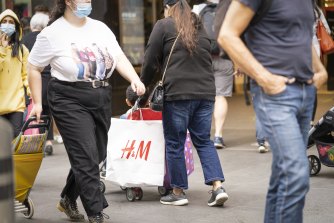 The bank’s business confidence survey for January, which covered 400 firms nationwide, found trading conditions around Australia had returned to long-term average levels in the first month of 2021 after companies enjoyed better-than-average times in November and December.

The retail sector continues to lead the recovery, NAB found, with the federal government’s pandemic wage subsidies and tax cuts putting money in the pockets of shoppers, whose opportunities for spending on travel and other services had been severely restricted.

But conditions in construction and the recreation and services sectors – which includes cafes and restaurants, as well as education services – remains weak, the survey found, and considerable uncertainty remains over the prospects for consumer spending once the federal government’s JobKeeper wage subsidy is withdrawn at the end of March.

Victorian firms reported the most difficult trading conditions of any state or territory in January, followed by NSW, but the bank reported that confidence continued to grow and Victorian respondents to the survey were more optimistic than their interstate counterparts about prospects improving.

Andrew Irvine, NAB’s Melbourne-based group executive for business banking, said the survey showed Victorian businesses had not shaken off the lingering effects of the COVID-19 shutdowns, but firms in the state were optimistic.

“In Victoria, while businesses are still lagging in performance, when I speak to business owners it is clear that as a community they are confident about the future,” he said.

“Victorian companies can see that recovery is in their sights and support at a local level shows that Australians are behind the small business community.”

Mr Irvine said retailers were helping to drag the economy out of its COVID slump, with some sectors recording phenomenal sales growth.

“Our own transaction data shows this in action, with spend in local bakeries up 85 per cent, spend in nurseries up 28 per cent and retail up 24 per cent,” he said.

“We’ve always said our recovery from COVID-19 will be business-led, and we’re seeing that play out, with retail leading the way. It’s clear communities are out there supporting their local businesses – our data also shows us that transactions at retailers over the past month are up 20 per cent and spend at restaurants is up 9 per nationally.

“The big area that still needs our support collectively is travel and tourism – holidaying at home is going to be such an important aspect of helping this sector start recovering in 2021.”

Council of Small Business of Australia spokesman David Gandolfo agreed optimism was returning to business in Victoria, but said it was recovering from a historic slump.

“People are certainly confident that we’re not going to go into another lockdown like we did last year,” Mr Gandolfo told The Age.

“But business conditions are so poor precisely because we did go into such a deep lockdown that other states didn’t go into. But the confidence is a little bit fragile, too, because as soon as there is a [COVID-19] case, people worry and we’re all a little bit concerned.

Tags: Businesses, in, upbeat, Victorian
You may also like
Celebrities News