A “strike force” of 400 staff will be tasked with triaging patients in Victorian hospitals and offloading them from ambulances more quickly to reduce emergency wait times and free up hospital beds.

Premier Daniel Andrews pledged $162 million to hire the new staff on Sunday after active coronavirus cases climbed to more than 63,000.

The staff – which include doctors, nurses and discharge coordinators – are expected to include part-time staff increasing their hours and private hospital staff filling public hospital shifts.

The staff will be deployed across 12 hospitals including Royal Melbourne Hospital, Monash Medical Centre and University Hospital in Geelong.

“We do some of this now, but this is taking it to a new level and making sure that we’ve got that really sharp focus on discharge practice – but also admissions practice – clearing those ambulances as quickly as possible so they can get back to doing emergency work,” Andrews said at a press conference at the Monash Children’s Hospital.

Andrews said it would take “a little time” to get the 400 staff into hospitals, but some hospital workers could potentially be redeployed in the jobs. 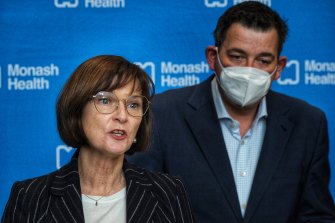 “There’s funding for all 400 of them,” he said. “In the interim, additional people who step into these roles away from other roles may have to be backfilled, it may be easier to find senior staff in a redeployment model and then replace them in whatever role they were playing.”

“There has to be an advertising and recruitment campaign, but in the very short term, there may be some people who are not working full time who can step up to increasing their hours,” he said. “There may be some people say who are employed in the private sector but can afford some of their time to work in the public sector, say on a weekend basis.”

He said the funding was a “courageous investment” because the benefit was difficult to quantify.

“It’s much easier for a politician to cut the blue ribbon on an ambulance bonnet and say ‘Look at this guys, here’s another ambulance’,” he said. “But this has to do with the entire patient flow through the hospital and indeed, improving the ability to discharge a patient so that the next patient or two can be admitted to hospital.”

“These staff aren’t even going to come on any time soon,” he said. “The premier promised 4,000 ICU beds two years ago and not a single one has been delivered. Now he wants you to believe he’s got all the answers when it comes to staffing shortages.”

The state health controller has declared Victoria will move into stage three of the health system’s winter response plan which includes using private hospital capacity to care for public patients.

Andrews said the move to stage three would not result in any cuts to elective surgery and it was up to health services as to whether they would call staff back from leave.

“That’s not done by the government, staff and rosters are done by individual health services,” he said. “We know that many people have come back from leave and I’m deeply grateful for that. Many people are completely fatigued, but they are pushing on and we thank them for that.”

Since June 22, there has been a 99 per cent increase in the number of Victorians in hospital with COVID-19. Admissions to intensive care due to the virus have increased by 60 per cent.

The staffing measure is part of a package which includes the creation of two paediatric GP respiratory clinics to combat surges in flu and COVID-19 in children.

Andrews also mooted a new trial to be undertaken at two private hospitals – which have not yet been announced – which will see their emergency departments take acute patients arriving in ambulances.

Health Minister Mary-Anne Thomas said healthcare workers knew it was going to be a “tough winter”, with the BA.4/BA.5 Omicron variants proving to be very infectious, alongside surges in influenza.

“What we know is that children are bearing the brunt of the flu season that we’re experiencing … other childhood respiratory illnesses like RSV [respiratory syncytial virus], asthma, colds and COVID have all contributed to putting greater demand on our children’s services,” she said.

“Making sure that we have dedicated respiratory services is just part of our government’s plan to help us get through this winter.”