Victoria has recorded 2095 new coronavirus cases and eight deaths on Christmas Eve, the first day of tough new mask mandates for the state.

Hospitalisations remained steady at 397, while there were 115 people being cared for in ICU.

From 11.59pm on Thursday, Victorians as young as eight were required to wear masks indoors (with the exception of private homes) and at large outdoor gatherings; a precaution authorities hope will stem the spread of the Omicron variant of COVID-19. 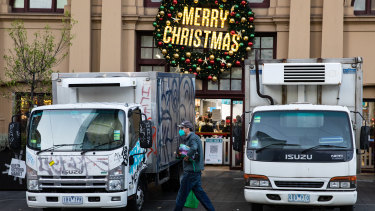 Victorians have woken up to the return of indoor mask mandates on Christmas Eve. Credit:Getty

While other parts of the country have mask mandates, Victoria is the only jurisdiction to require children younger than 12 to wear masks indoors. As of Thursday, Victoria had 71 confirmed Omicron cases.

Public health experts welcomed the move, saying children aged 11 and under remained unvaccinated and the highest number of COVID-19 infections in Victoria was for children under nine.

Police Association Victoria secretary Wayne Gatt told 3AW radio on Thursday he would be “very, very doubtful” that nine and 10-year-olds would be fined for not wearing a mask.

“And I’m not sure how they could to be quite honest, because generally speaking, you have to be at least 10 years’ old to commit an offence in Victoria,” he said. 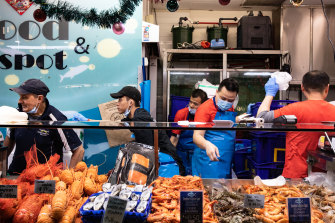 Workers at the Queen Victoria Market had a busy Christmas Eve morning, as people stocked up on food to celebrate. Credit:Getty

“But certainly for young people, there’s been a very, very discretionary approach adopted by Victoria Police and our members.”

Victorian Chamber of Commerce chief executive Paul Guerra said the chamber would have preferred mask-wearing to remain an individual choice, and would like to see the mandate removed before office workers return in the new year.

“However, we recognise that the mask-wearing requirement will still enable every business to open without density limits, which is crucial as our economy roars back,” Mr Guerra said.

The current health orders will be in place in Victoria until at least January 12.