Residents in Victoria’s east are bracing for heavy rain, damaging gusts, power outages and flooding as a low-pressure system moves across the state on Friday.

Persistent rainfall is expected to cause river surges in most catchments in central and eastern Victoria but the front will fall short of bringing the widespread destruction thunderstorms caused across the state last month. 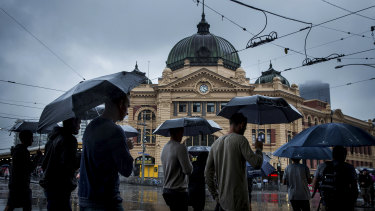 Persistent rainfall over the next 24 hours could cause river rises and flash flooding.Credit:Paul Jeffers

Locations that may be affected by flooding include Morwell, Traralgon, Sale, Moe, Bairnsdale and Orbost.

The front will travel across north-eastern Victoria throughout the day before moving into the Tasman Sea at night, bringing rainfalls of between 25 and 50 millimetres across the north-east and Gippsland regions.

Melbourne is forecast to receive between 15 and 30 millimetres of rain on Friday with higher falls of up to 80 millimetres possible across the Gippsland high country and adjacent coastline.

Damaging winds with peak gusts of up to 90 kilometres per hour could also develop in Kyneton, Daylesford and Bacchus Marsh.

Powercor Australia, the electricity provider to central and western Victoria, said the combination of south-easterly winds and wet conditions were likely to damage trees and could lead to outages across the network.

Bureau of Meteorology manager Diana Eadie said rain was expected to develop across eastern and central Victoria on Friday and continue through Saturday.

“There’s a risk of locally heavy falls and flash flooding, particularly over the Gippsland and north-east areas,” she said.

“We’ve seen a lot of rain in those areas recently and the ground is already wet, which means that riverine rises are more likely.”

Ms Eadie said the winds would be south-easterly, but not as intense as those that hit the state during storms in June.

“Wind gusts of around 90 kilometres per hour are possible around the Macedon area over the course of Friday,” she said.

“The combination of this unusual wind direction and also those wet conditions on the ground do mean that damage to trees is more likely.”

The bureau has warned sheep graziers in most parts of the state severe weather conditions could lead to the loss of exposed sheep and lambs.

Victoria’s State Emergency Service said it had received more than 100 calls for help with fallen trees, building damage and flooding in the 24 hours to Thursday afternoon.

By 5.30pm on Thursday, crews had already responded to 78 requests for assistance and about a dozen remained active.

“We know the number one killer during floods is people attempting to drive through floodwaters,” he said.

“We can’t emphasise enough – never attempt to drive through floodwaters, it may be the last decision you make.”

Mr Wiebusch said Victorians should secure their loose items at their homes, and warned of possible further blackouts, just days after thousands regained their power.

“People need to take precautions now, make sure your mobile phone is charged, that you have a torch, and that you have access to emergency warnings.”

Tags: Alert:, as, on, severe, Victoria, We
You may also like
Celebrities News