England’s Covid R rate will likely remain above one even AFTER everyone is vaccinated, PHE study says

England’s R rate is ‘unlikely’ to drop below one even after all adults have been fully vaccinated, official modelling suggests.

Public Health England estimated the rate of spread when daily activity returns to ‘normal levels’ and remaining restrictions are dropped.

In papers published today by SAGE they concluded: ‘Vaccination reduces the reproduction number, but is unlikely to reduce it below one when contacts in school, work and leisure are back to normal levels.’

The R rate — which measures how many people each person with the virus infects — must stay at one or lower for an outbreak to stop growing or to shrink. The lower the number, the faster cases come down. Higher than one, and they increase.

Scientists say the R rate becomes ‘progressively unreliable’ when the country is recording low numbers of cases, which amplify relatively minor changes. So an R rate of 1.2 with 100 cases would not be as devastating as the same rate with 100,000.

The PHE paper said the virus would still spread even after the vaccine rollout because vaccine coverage is ‘leaky’.

It explained: ‘It reduces the probability of infection per contact, but does not result in full protection.’

Studies have suggested that two doses of the Pfizer vaccine, for example, prevent around 94 per cent of infections. For AstraZeneca the figure is lower. This means some people will still get infected after their jab and the virus will still circulate.

But scientists hope that outbreaks in the future won’t be as bad because far fewer infected people will get severely ill and almost none will die, compared to before vaccination. 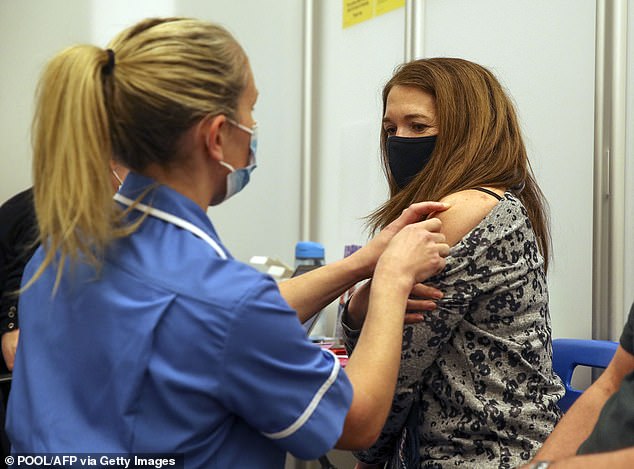 Public Health England estimated the R rate would remain above one even after everyone has been offered two doses of the coronavirus vaccine. (Stock photo) 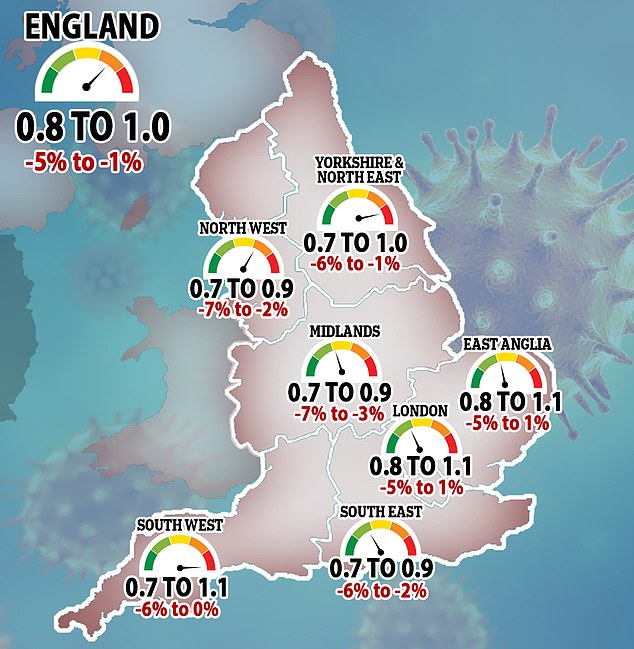 No10’s top scientists today said England’s R rate had risen slightly to 0.8 to 1.0. But they added it was less reliable because of low cases of the virus

Just 6 per cent of beds are taken up by coronavirus patients at England’s busiest hospital, according to official figures which could pile more pressure on Boris Johnson to speed up his roadmap out of lockdown.

Analysis of the latest NHS statistics by MailOnline shows just 19 beds — or 6.4 per cent — at Hillingdon Hospitals NHS Foundation Trust were taken up by people suffering from Covid in the week ending April 13.

For comparison, Covid occupancy rates breached 60 per cent at England’s then-busiest trust – Whittington Health in London – during the darkest days of January.

Almost every hospital in England now has fewer than five per cent of its beds occupied by Covid patients, the latest figures show, and none had more than seven per cent of capacity designated to the virus.

But a whopping 106 hospitals – 84 per cent – had more than five per cent of their patients suffering from Covid in the week ending January 12, at the peak of the second wave.

Experts today said it would be ‘crazy’ not to relax more restrictions now that hospital levels are so low. Under the Prime Minister’s current plan, the next relaxation is not due until May 17.

The PHE paper released today indicated opening up society fully in the summer will likely push the R rate above one and keep it there.

It read: ‘These results highlight that even at high coverage of 19 years and over there is still a significant probability that R is above one.

‘[This is likely] if schools are open and number of contacts were back to normal.’

The R value is calculated using official figures including the number of cases, hospitalisations and deaths that have been linked to the virus.

A value above one indicates everyone who has the virus is passing it on to at least one another person, suggesting the outbreak is no longer shrinking.

But it is a lagging indicator, and tends to show the situation from three weeks ago because of the time taken to gather sufficient data.

Experts have warned England’s R rate is becoming increasingly unreliable, as Covid infections are estimated to have dwindled to similar levels to early September.

The Government aims to offer everyone over 18 at least one dose of the Covid vaccine by July, with projections suggesting they are on track.

More than 33million Britons – or three in five adults – have already received one dose, and 11million have received two doses.

It comes as statisticians today warned the R rate for England may have risen slightly from 0.7 to 1.0 last week, to 0.8 to 1.0 this week.

The current rate suggests every 10 people who are infected, are passing it on to between eight and 10 other people.

But it will not restart indoor hospitality, or allow foreign holidays, until May 17 at the earliest.

Professor Karol Sikora, an expert in medicine at Buckingham University, told MailOnline the figures suggested the Prime Minister should bring forward his dates for relaxing restriction. The next easing isn’t expected until May 17.

And Professor Tim Spector, a top epidemiologist who leads a symptom-tracking app, added promising data suggests tight curbs on visiting care homes -—where only two named visitors are allowed — should be loosened.

He added that restrictions could also be eased faster in the South of England, where cases are lower compared to the rest of the country.