THE United States has reactivated a nuclear unit in Germany for the first time since the Cold War and is armed with "Dark Eagle" long-range hypersonic missiles.

When fully developed and deployed the rockets will be capable of travelling 4,000mph and could blitz Russia in just six minutes. 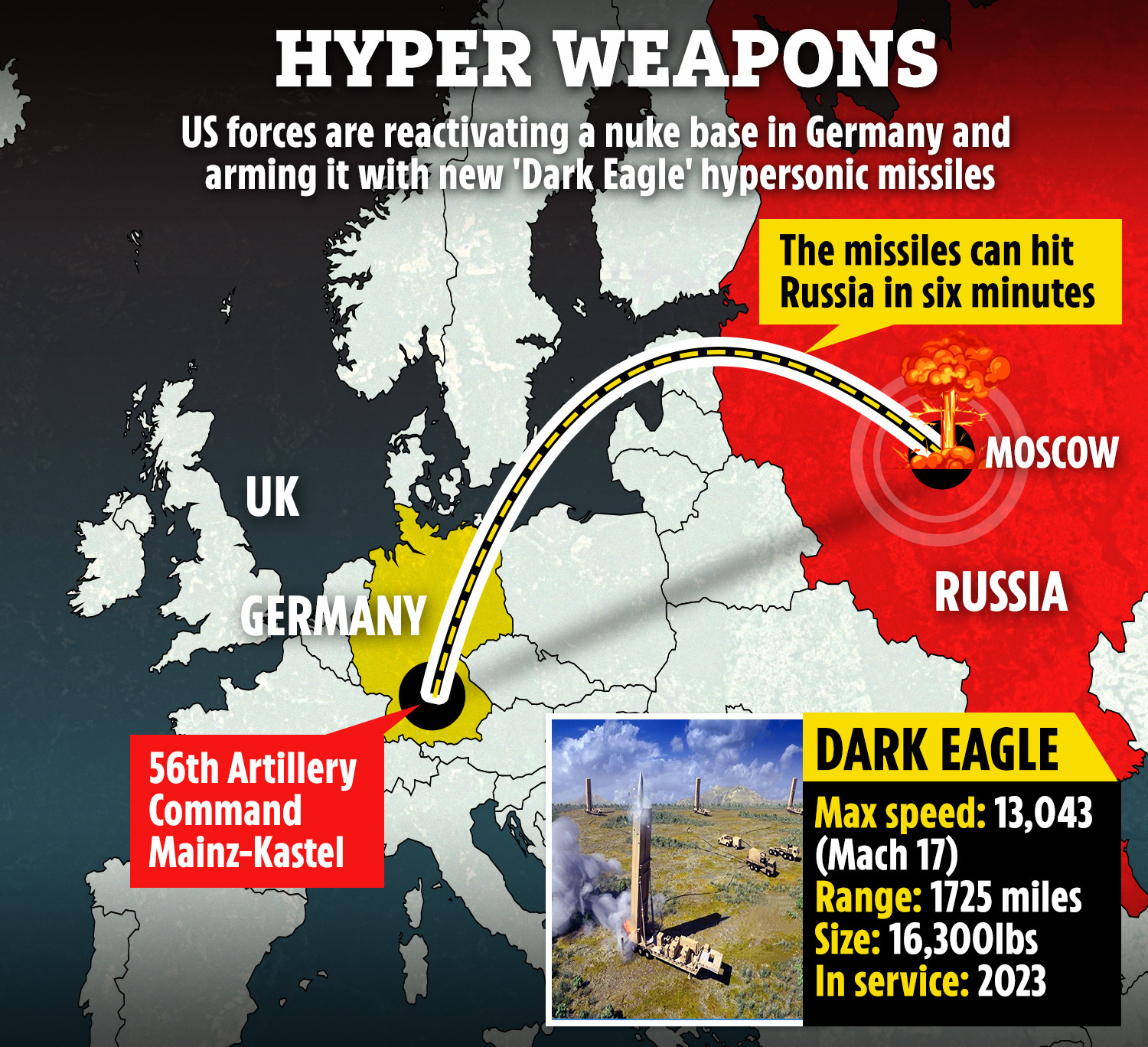 The 56th Artillery Command, based in the Western District of Mainz-Kastel, was officially recommissioned by the US Army this week during a ceremony.

The decision to reactivate is amid the growing concerns in the Pentagon that Russia has succeeded NATO and the US in creating long-range artillery rockets.

The Command was first formed in 1942 and fought in Europe during World War II but was deactivated in 1991 with the fall of the Soviet Union.

The commanding general of the artillery unit, General Stephen Maranian said the development will "provide the US Army Europe and Africa with significant capabilities in multi-domain operations”.

It was believed that the US was falling behind in the creation of a hypersonic weapon until last month when it was announced that the US had completed its delivery of the "Dark Eagle".

“From a blank piece of paper in March 2019, we, along with our industry partners and joint services, delivered this hardware in just over two years. Now, Soldiers can begin training,” Lt. Gen. L. Neil Thurgood said in a statement.

Last month, China appeared to have taken a shock lead in the hypersonic arms race after it was revealed that Beijing flew a nuclear-capable missile around the world.

US intelligence and military officials were reportedly left stunned after China launched a rocket in space carrying a hypersonic glide vehicle that circled the globe before speeding towards its target.

The next generation of weapons can hit speeds of up to 21,000mph – and potentially even faster – and are seen as a devastating new frontier for warfare.

Hypersonic missiles are a game-changer because unlike ballistic missiles, which fly into space before returning on steep trajectories, they zoom in on targets at lower altitudes.

This combined with typical speeds of five times the speed of sound – or around 4,000mph – makes them extremely hard to shoot down and a potent weapon more countries want to get their hands on.

China – followed closely by Russia – were already regarded as having the most potent hypersonic missile arsenals pouring billions into them but others had been seen as catching up.

But the shocking revelations of their missile test back in August has sent shockwaves through Western intelligence who fear they actually underestimated Beijing.

US intelligence and military officials were reportedly left stunned after China launched a rocket in space carrying a hypersonic glide vehicle that circled the globe before speeding towards its target.

Circling the globe, it shows the weapon potentially has a range of some 25,000 miles and can operate in space.

It means the missile can theoretically hit anywhere on Earth.

The nuke-capable missile however missed its target by about two-dozen miles when it was secretly launched, intelligence sources told the Financial Times.

Tags: Arm, Germ, in, nuclear, to, unit, Us'
You may also like
Celebrities News