Washington: The US said it has conducted a drone strike against an Islamic State-K operative in Afghanistan’s Nangahar province, east of Kabul and initial indications showed the target was killed.

It said it was an unmanned counter-terrorism airstrike against an IS-K (also ISIS-K) “planner” – its first apparent reprisal for the Kabul airport attack. 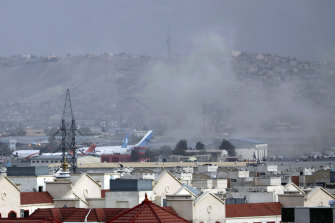 Smoke rises from a deadly explosion outside the airport in Kabul, Afghanistan, on Thursday.Credit:AP

“Initial indications are that we killed the target,” Bill Urban, a spokesman for US Central Command, said in a statement. “We know of no civilian casualties.”

Large crowds still milled around Kabul’s international airport despite repeated warnings of more terrorist attacks, a day after 13 US service members and dozens of Afghan citizens died in what the Defence Department now says was a single suicide bombing rather than the two previously reported.

The window for civilian evacuations has all but closed for thousands of Afghans as many countries have either ended or are about to end airlift operations on security concerns. President Joe Biden vowed to complete the US evacuation mission in Afghanistan and pledged to pursue the attackers.

Tags: Islamic, KILLS, plan, State-K, Us'
You may also like
Celebrities News