A Fiji court has ruled that the United States can seize a Russian-owned superyacht, 21 days after the luxury vessel Amadea arrived in the Pacific island nation and was detained by police.

US authorities assert that the Amadea is ultimately owned by Russian oligarch Suleiman Kerimov, who has been sanctioned by the United States and the European Union.

The US Justice Department’s Taskforce KleptoCapture has focused on seizing yachts and other luxury assets to put the finances of Russian oligarchs under strain in a bid to pressure Russian President Vladimir Putin to call off his invasion of Ukraine. 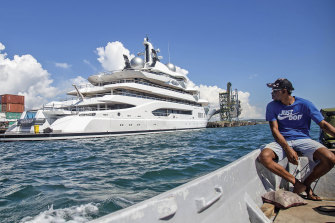 oat captain Emosi Dawai looks at the superyacht Amadea where it is docked at the Queens Wharf in Lautoka, Fij.Credit:Fiji Sun

Fiji’s High Court ruled it would grant an order to register a US seizure warrant, but it also allowed the defence, acting for the Amadea’s registered owners Millemarin Investment, time to appeal the law.

Until this is resolved, the $436 million boat will remain berthed at Fiji’s Lautoka Wharf with its crew of about 25 rotating on and off the vessel, while a police officer remains on board to ensure it stays put.

According to Boat International, the Amadea is 106 metres long and was built in 2017. It features a stainless-steel albatross that extends off the bow and weighs more than 5 tons, a live lobster tank in the galley, a 10-metre pool, a hand-painted Pleyel piano and a large helipad.

The defence argues that the boat does not belong to Kerimov, but instead to fellow Russian billionaire Eduard Khudainatov, the former chairman and chief executive of Rosneft, the state-controlled Russian oil and gas company. Khudainatov, crucially, has not been sanctioned.

“There is some indication that American authorities are wanting to take this boat away,” Defence lawyer Feizal Haniff told the ABC outside the court. “[The judge] said we have a right to appeal, and obviously he said that we will ensure that the boat is in Fiji while the stay application is filed.”

The Amadea arrived in Fiji last month after an 18-day voyage across the Pacific from Mexico.

It was detained by Fiji police and its captain questioned on why the vessel had arrived in Fiji waters without customs clearance.

Fiji’s Health Minister Dr Ifereimi Waqainabete was quoted by the Fiji Times at the time the boat was seized as saying “We don’t do Russians”.

The island nation’s High Court last month granted a restraining order stopping the Amadea from leaving Fiji until the court had considered the US seizure warrant that was issued the day the boat arrived.

Fiji authorities argued that the court did not need to determine ownership of the vessel, only that it was subject to a US warrant in a money-laundering case.

The United States sanctioned Kerimov, a former Russian politician who made his fortune in gold, in 2018 and 2014 in response to Russia’s actions in Syria and Ukraine.

The US embassy in Suva did not immediately respond to a request for comment on the court ruling.