Britain’s coronavirus outbreak continued to trend upwards today as another 31,914 people tested positive for the virus.

Department of Health figures showed cases had risen 12 per cent from last Monday, when 28,438 were recorded.  They also posted another 40 deaths — up 54 per cent in a week.

Latest hospital data revealed that 948 people were admitted with the virus on August 17, which was almost eight per cent higher than the week prior.

It came as separate statistics showed Covid became the ninth leading cause of death in England in July as the country shrugged off the last shackles of lockdown, and was behind 969 out of 40,467 fatalities (2.4 per cent).

For comparison, in June it was the 26th biggest killer behind 0.9 per cent of deaths — or fewer than 100 fatalities.

But the proportion of deaths caused by the virus was still far lower last month than at other points in the pandemic thanks to the vaccination drive. Covid accounted for 37 per cent of deaths at the height of the second wave.

Latest vaccination figures show 40,345 first doses were dished out yesterday, taking the total to 47.6million — or 87.7 per cent of adults. And 116,352 second doses were also administered, with 41.8million people — or 76.9 per cent of adults — already being fully jabbed. 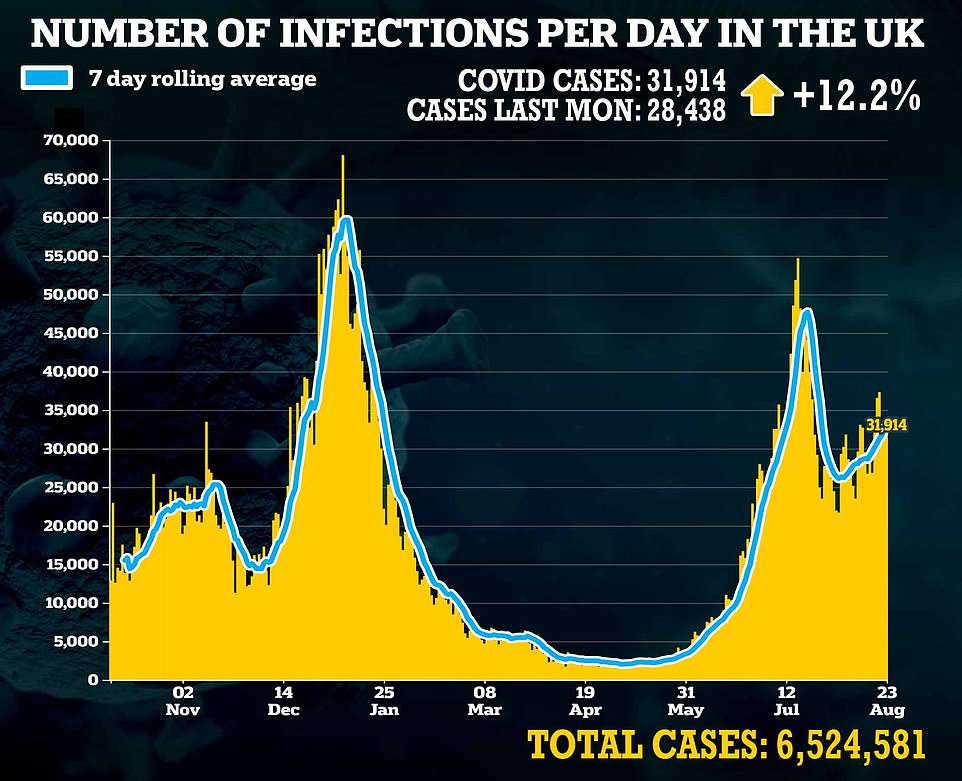 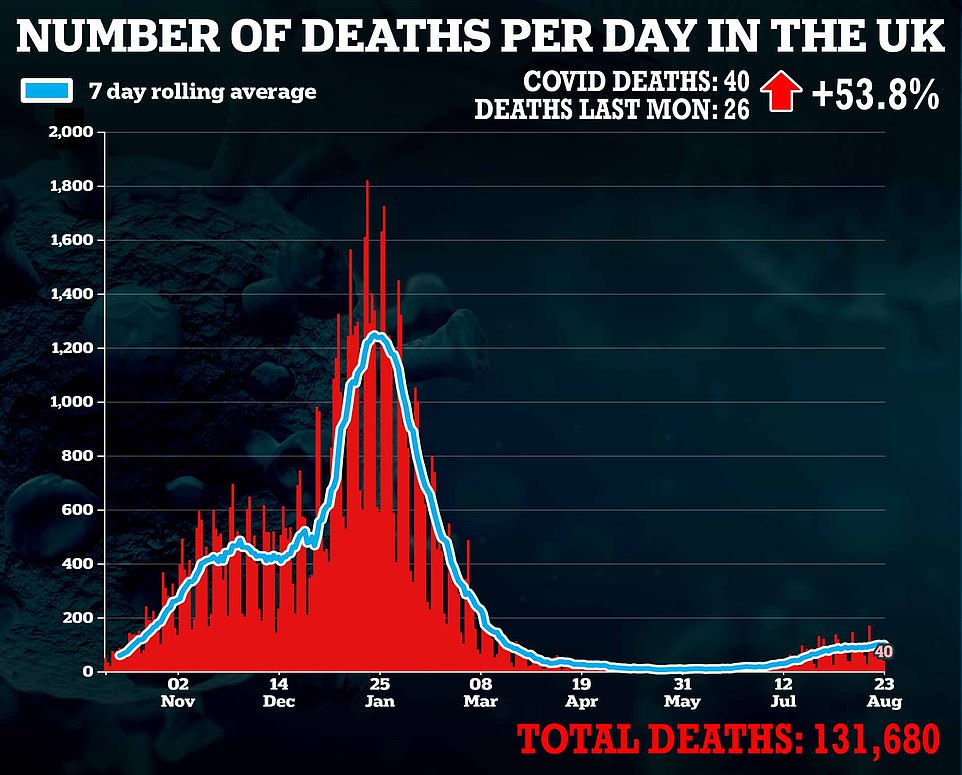 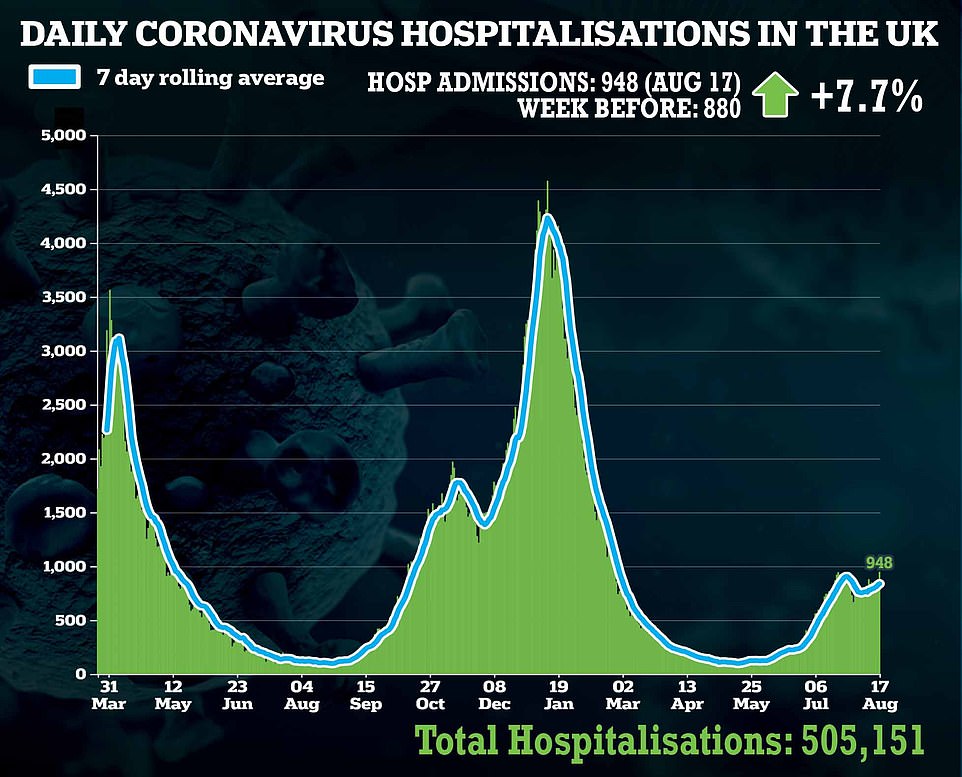 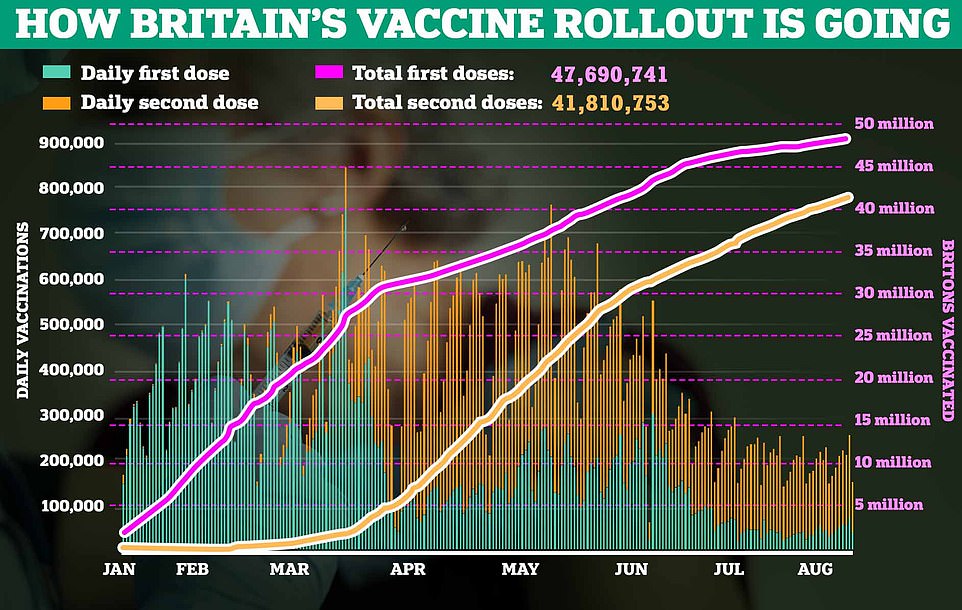 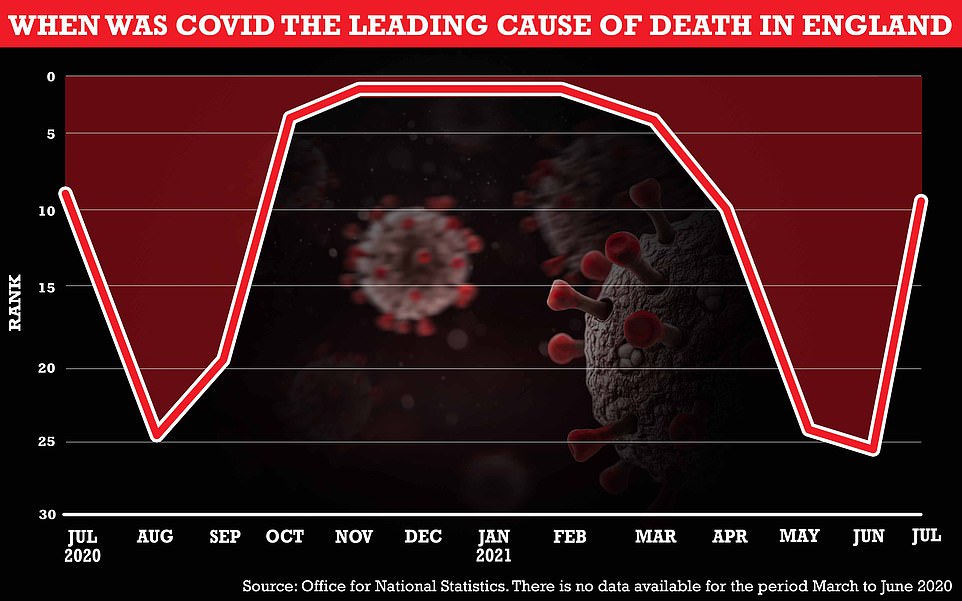 Covid was the leading cause of death in England at the end of 2019 and beginning of 2020, but it plummeted to 26th place in June. But it has now jumped 17 places to be the ninth biggest killer. In July, 969 of the 40,467 fatalities recorded in the country were caused by the virus, while a total of 1,161 people had Covid mentioned on their death certificate 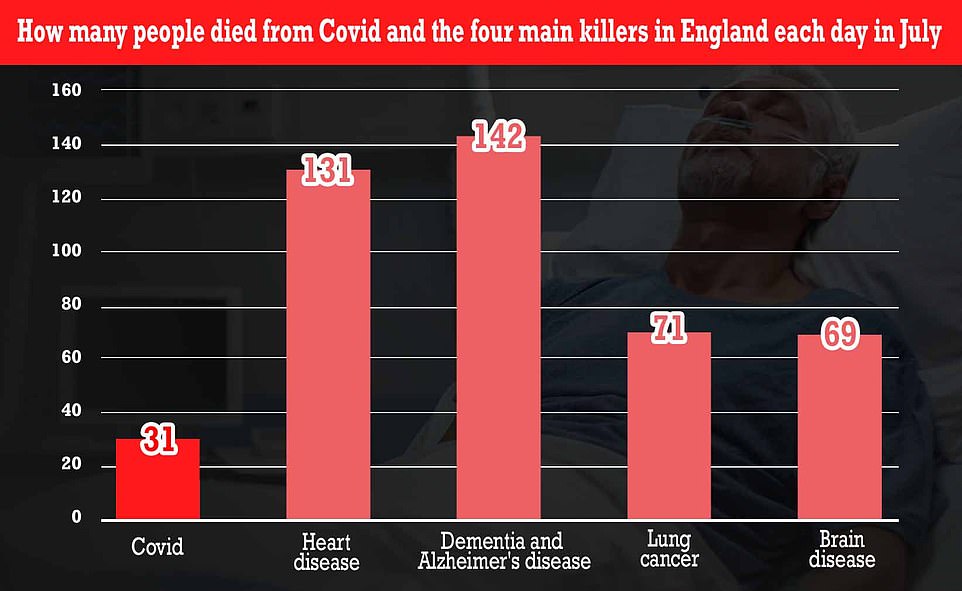 On average, 31 people died due to Covid a day in July. According to official Government figures, a high of 102 Covid deaths were recorded in one day in July, but these include anyone who passed away and tested positive within the previous 28 days, meaning some died from other causes and just happened to have the virus. Meanwhile, an average of 142 people died a day from dementia and Alzheimer’s, the country’s biggest killer last month, followed by heart disease (131), lung cancer (71) and brain disease (69)

A third dose of Pfizer’s Covid vaccine significantly improves protection against infection and serious illness in the over-60s, according to an official study in Israel.

It found that people given a booster shot were four times less likely to catch the virus after 10 days compared to those only given two doses.

A third jab also enhanced protection from serious illness and hospitalisation in the over-60s by five to six times, according to the study by the Israeli Health Ministry.

The findings, believed to be based on real-world data, were presented at a meeting of a ministry panel of vaccination experts on Thursday. But full details of the study are yet to be released.

They are in line with separate data reported by Israel’s Maccabi healthcare provider last week which found the boosters to be highly effective.

Israel became the first country in the world to start administering booster shots to the over-60s at the end of July — with more than a million already jabbed.

But amid a surging fourth wave of infections from the Delta strain, the programme has been expanded to all over-40s, medics, teachers and other frontline workers.

Britain is under mounting pressure to follow suit but the Joint Committee of Vaccination and Immunisation (JCVI), which advises No10 on the roll out, is only expected to green light third doses for vulnerable adults.

Dementia and Alzheimer’s was responsible for four times more deaths than Covid last month, while heart disease and lung cancer continue to round out the top three causes.

The 969 Covid deaths last month equate to an average of 31 deaths per day throughout the whole of July.  However, this number has risen significantly since Freedom Day went ahead on July 19 and triggered a sustained uptick in cases and deaths. The UK as a whole is currently averaging 98 deaths per day.

Meanwhile, Britain has ordered 35million more doses of Pfizer’s Covid jab to dish out as boosters next year.

The injections will arrive in the second half of 2022 and ‘future proof’ the country against the virus and variants, the Department of Health announced today.

Health Secretary Sajid Javid said the additional doses — enough to give top-ups to more than half of the population — are to ensure the country ‘remains ahead of the virus for years to come’.

Some 89.3million jabs have been administered in the UK so far, which has seen 77 per cent of over-16s double-jabbed and 88 per cent given at least one dose.

The NHS is prepared for its first Covid vaccine booster rollout from next month, which will run alongside a national flu immunisation programme.

Vulnerable adults  with suppressed immune systems are expected to be offered boosters first, but exactly who else will be eligible hasn’t been finalised yet.

A decision from the Joint Committee on Vaccination and Immunisation is due in the coming weeks.

On the back of the announcement of the Pfizer deal this afternoon, the director of the World Health Organization (WHO) said he was ‘really disappointed’ at the scope of vaccine donations worldwide.

The WHO has repeatedly called for vaccine doses to be prioritised for first and second injections in developing nations over booster programmes.

The deal between the Vaccine Taskforce and Pfizer has not yet been published, so details including the cost of the jabs are not yet available.

The order is enough to vaccinate the 15.5million over-60s in the UK and have doses left to spare.

Mr Javid said the UK’s ‘phenomenal vaccination programme’ has so far saved 95,200 lives in the UK and prevented 82,100 hospitalisations among over-65s in England alone.

And they have prevented 23.9million infections in England, according to Public Health England.

The Health Secretary added: ‘While we continue to build this wall of defence from Covid, it’s also vital we do everything we can to protect the country for the future too – whether that’s from the virus as we know it or new variants.

‘I am pleased we’ve reached this agreement with Pfizer for more doses as part of our robust preparations to future-proof our vaccine programme, ensuring we have plans in place to keep the nation safe for years to come.’

Pfizer’s Covid jab is 85 to 95 per cent effective at stopping someone from developing Covid symptoms after two doses, according to latest PHE estimates.

Scientists estimate it is more effective than the AstraZeneca jab, which still offers strong protection against hospitalisation and death, but is slightly less effective at stopping symptomatic infections for the first few months.

But a growing number of studies have suggested protection from the jabs wanes over time, more starkly with the Pfizer vaccine.

Israel – a world-leader in vaccines – became the first country in the world to start offering booster jabs last month, amid a surging fourth wave of infections due to the Delta strain.

The country has relied solely on the Pfizer jab for its rollout.

A study by the country’s Health Ministry, which was presented to officials on Thursday, found people who received third doses of Pfizer were four times less likely to catch the virus after 10 days compared to those only given two doses.

The findings are believed to be based on real-world data, but the details are yet to be released.

Israel began administering third doses to people over 60 in July, later dropping the minimum age of eligibility to 50 and offering boosters to health workers and others.

Now everyone over the age of 40 and teachers are being invited for a third dose.

Britain is under mounting pressure to launch its own mass rollout.

The JCVI is expected to only green light third doses for vulnerable adults with suppressed immune systems.

The boosters will almost certainly be offered to the 3.7million Britons classified as ‘clinically extremely vulnerable’, with diseases such as cancer.

But originally it was hoped that the programme would be open to all over-50s, key workers and sick patients – which would have included as many as 32m people.

Some scientists have said vaccines should be used to administer first doses to people in other countries before third doses are offered in the UK.

Dr Tedros, director general at the WHO, said that of the 4.8 billion vaccine doses delivered to date globally, three-quarters have gone to just 10 countries.

Speaking to reporters today, he called for rich nations ‘to share what can be used for boosters with other countries so [they] can increase their first and second vaccination coverage.’

Professor Sir Andrew Pollard, one of the scientists behind the Oxford AstraZeneca jab and chair of the JCVI, said last week: ‘The greatest priority for vaccines in the world is for those who remain without protection but are at high risk of dying from Covid, including older adults, those with health conditions and health care workers, wherever they live.

‘Those with zero doses have a lot to gain from receiving a vaccine today and so should be ahead of those who are already two doses up.’

And Professor Danny Altmann, an immunologist at Imperial College London and a member of SAGE’s immunology taskforce, said sharing out the vaccine equitably to other countries is likely the best move, because ‘the fewer millions of lungs you have virus replicating in, the better off we’re all going to be’.

The Government said it will donate 100million Covid jabs within the next 12 months and has donated £548million to help distribute doses in developing countries.