UK Covid cases and deaths have decreased by almost a fifth in a week with 29,173 new infections recorded in the last 24 hours.

And a further 56 fatalities have been reported in the last day, bringing the grim total in the UK to 134,200 – as the Health Secretary scrapped vaccine passports and future lockdowns. 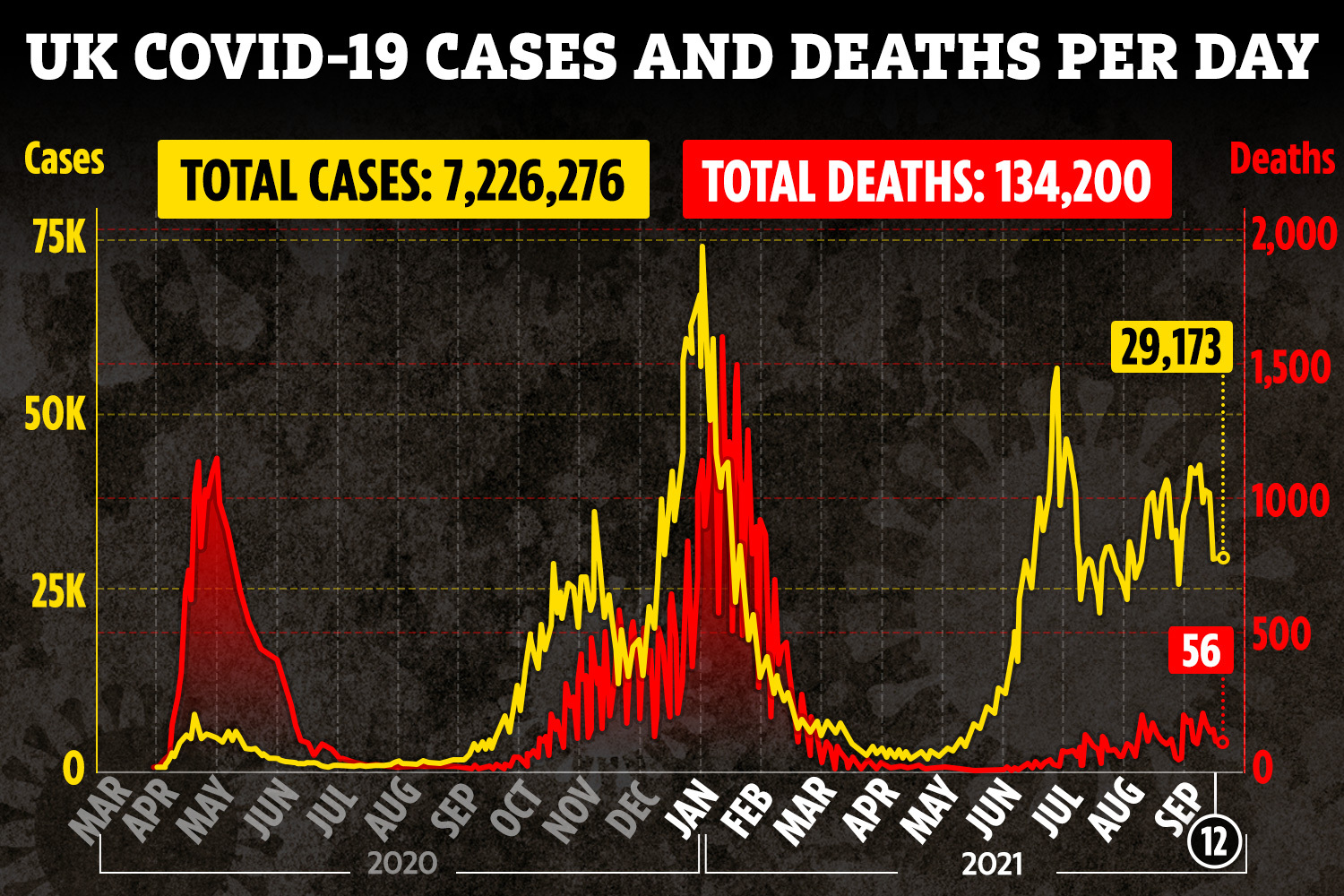 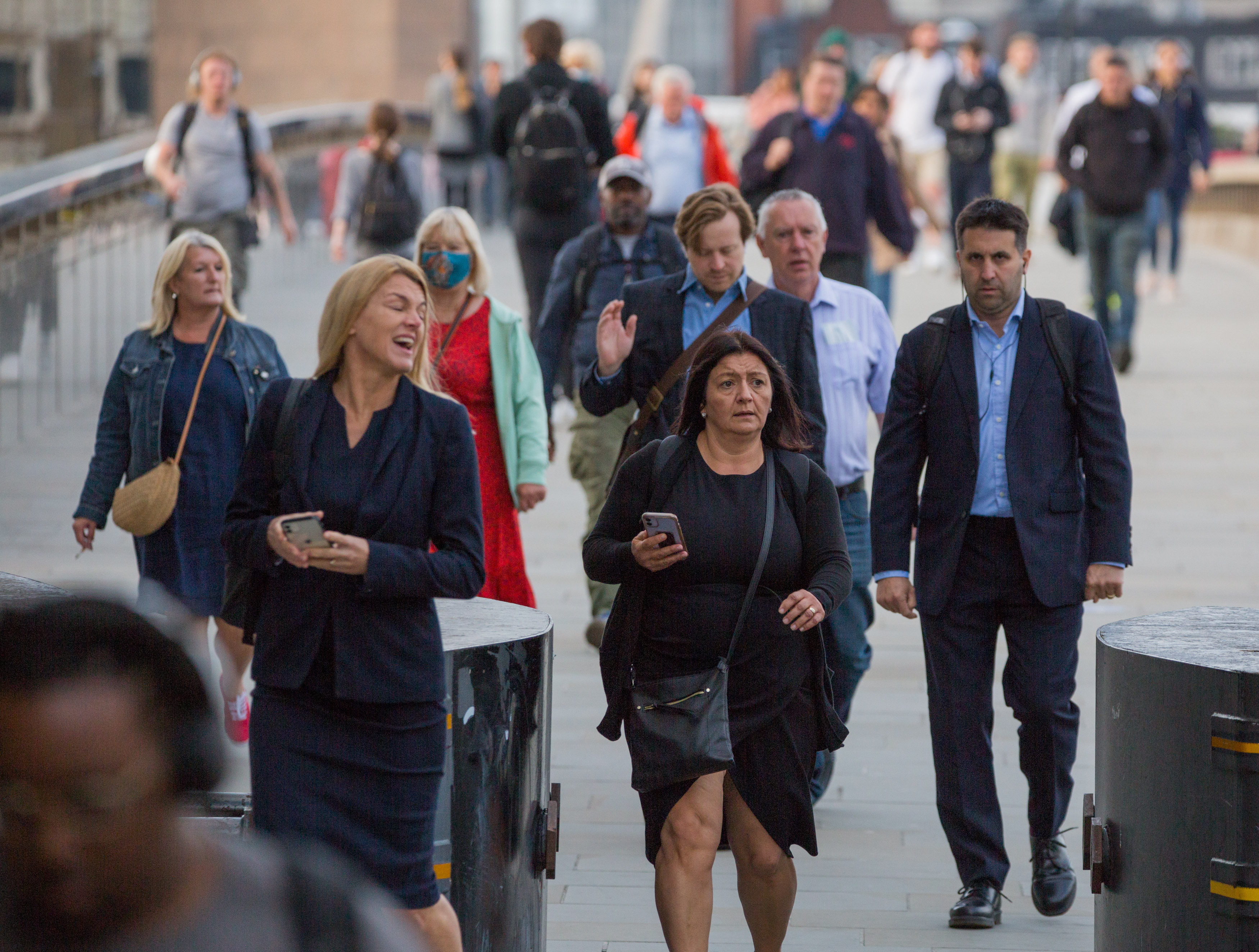 The total number of cases reported since the pandemic began now stands at 7,226,276.

As with every week, it is expected that figures are slightly lower on a Sunday due to reporting issues.

This follows news that plans to introduce Covid vaccine passports have been SCRAPPED as Sajid Javid confirms people won't need them to get into nightclubs and cinemas.

The Health Secretary revealed this morning that Covid jab passports won't be introduced as a measure to fight the virus as we enter the winter months.

He told the BBC today: "I am pleased to say that we will not be going ahead with plans for vaccine passports."

Boris Johnson is now primed to announce at a press conference that he has abandoned the proposed compulsory certification scheme – which would have forced venues to check punter's vaccine status.

This comes as No 10 is preparing to unveil contingency plans next week for keeping the economy open this winter if there is a Covid surge.

Previously, it was reported that Tory MPs were furious about the PM's vaccine passport blueprint – with more than 50 poised to rebel against it in a Commons vote.

Steve Baker, deputy head of the Covid Research Group, said it's "increasingly plain" the plan is about "coercing the young" into getting jabbed.

And earlier today, Mr Javid also confirmed that PRC tests for double-vaccinated Brit holidaymakers will be scrapped "as soon as possible."

The Health Secretary revealed he's already asked officials to get rid of travel testing rules, as they shouldn't be in place for a second longer than "absolutely necessary."

Boris Johnson will outline his Covid winter plan next week, revealing everything in our "toolbox" to battle the virus during the winter months.

The PM is expected to say that vaccines will continue to be the first line of defence over the autumn and winter – a high-risk time for Covid as other respiratory illnesses circulate.

The independent Joint Committee on Vaccinations and Immunisation is also poised to recommend details of a jab booster programme next week so that Brits are protected in the coming months.

Those who are vulnerable may receive their boosters as early as this month.

Another major step set to be revealed is that the powers held to shut down swathes of the economy and impose limits on gatherings and events will be repealed.

The red tape roll-back is part of a masterplan from the PM, who is desperate to avoid any further lockdowns.

The temporary closing or limiting access to schools and powers to detain infectious people under the Coronavirus Act — called draconian by some Tory MPs — are no longer seen as necessary.

Meanwhile, there won't be any more "irresponsible" Covid lockdowns and Brits WILL get to celebrate Christmas this year, Sajid Javid has vowed.

The Health Secretary told Brits that they would be able to enjoy the festivities without the fear of another lockdown – after last year's disastrous last-minute U-turn.

Asked whether Brits will be able to enjoy the holidays this year, Sajid Javid told the BBC: "Of course we get Christmas!

"I'm not anticipating any more lockdowns. I think it would be irresponsible for any health minister around the world to take everything off the table.

"I just don't see how we'd get another lockdown."

Just days before December 25 last year, Boris Johnson cancelled Christmas bubbles in London and in parts of the southeast and east of England as the regions were plunged into new Tier 4 coronavirus restrictions.

He said in a solemn speech last year: "Given the early evidence we have on this new variant of the virus, and the potential risk it poses, it is with a heavy heart that I must tell you we cannot continue with Christmas as planned."

The cancelled Christmas period was then followed by a total national lockdown, which started in January.

But the Health Sec has vowed that Brits won't have to fear the chance of being thrown into a "draconian" lockdown again.

Tags: and, cases, covid-, deaths, drop, UK
You may also like
Celebrities News