Herbert Lovett had to wait for the Australian Imperial Force to reduce the minimum height for volunteers before he could sign up for World War I.

The AIF, which initially ruled its soldiers had to be at least five feet, six inches tall (167.6 centimetres), soon enough found itself running out of volunteers willing to face the slaughter on the bloodied fields of France and Belgium. 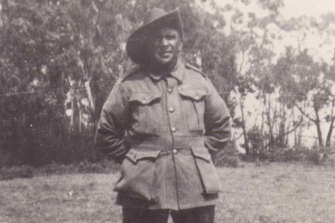 It decided in April 1917 that men who were at least five feet (152.4 centimetres) would be accepted.

Mr Lovett’s recruitment papers on April 30, 1917, revealed he stood at five feet, one and a quarter inches (about 155 centimetres).

But that wasn’t the most important test of his eligibility.

A note written by the recruitment officer in Hamilton, western Victoria, still held by the National Archives of Australia, reveals the starker truth. 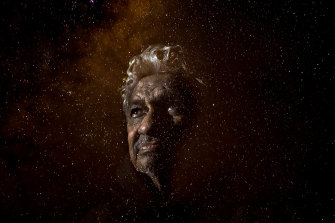 “This recruit has two other brothers with the AIF and his parents are not pure-blooded Blacks,” the note reads. “White people on both parents’ side.”

The 20-year-old, from the Lake Condah Aboriginal Mission, a man of the Gunditjmara of south-west Victoria and the Bunganditj people of south-east South Australia, was judged as suitable to fight for Australia only because he had enough “white” blood.

By mid-1918, Mr Lovett was in France with the newly formed 5th Machine Gun Battalion, fighting to hold back Germany’s last big push, known as the Spring Offensive.

Soon, the young machine-gunner was immersed in the deadly Hundred Days Offensive – a series of battles that drove the Germans back from Amiens and through the Hindenburg Line, eventually ending the war on November 11, 1918.

We call it Remembrance Day.

But Mr Lovett’s son, Uncle Johnny Lovett, holds every day as a personal remembrance day for his dad.

Uncle Johnny, 73, knows there was never proper honour shown to his father, and he is determined that, even now, it should be paid.

Mr Lovett – like his four brothers and numerous other Aboriginal men who fought in World War I – brought home lasting memories of horror, believing at least that he had earned on the battlefields what he had always craved: equality. There was no white blood, nor black blood. It all ran red. 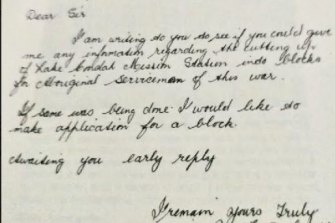 Back in Australia, however, nothing had changed, beyond the fact the Lake Condah Mission – Mr Lovett’s home in south-west Victoria since he was born in 1897 – had officially closed.

Part of the old property was split and hived off for an early form of soldier settlement. No farms went to Aboriginal soldiers.

Having lost their ancestral lands in the frontier wars of the 1800s, the people of Lake Condah were now effectively homeless.

Mr Lovett married Emma Foster, from another mission family, in 1927, and over the next 20 years, they had six children.

There was no white blood, nor black blood. It all ran red.

He chose a condemned house on the old mission, mounted it on sleds and dragged it behind horses 12 kilometres through the bush to a plot of land by a creek near the town of Heywood.

Here was a soldier, however, who had won no freedom to create his own home for his family.

Before he could hammer together and weatherproof the old building, he had to ask permission of the Heywood policeman, who would “supervise” the job on behalf of the Aboriginal Protection Board.

Mr Lovett kept his family fed by splitting posts in the bush, stripping wattle bark for tanning, labouring at a quarry, working at a timber mill and grabbing work wherever it could be found.

There was no electricity at home, but there was a piano. Mr Lovett was a talented musician and singer, and apart from piano, he played button accordion, violin and organ to buoy his family’s spirits.

When World War II rolled around, Mr Lovett and his brothers returned to the recruiting office.

He was 43 when he signed up in August 1940. Deemed too old for battle, he served out the war as a cook at Australian military bases. 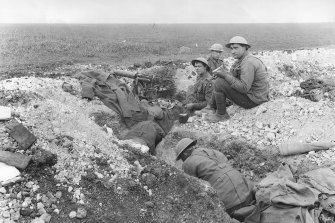 Herbert Lovett was a member of the 5th Australian Machine Gun Battalion. This picture shows members of that battalion at Villers-Bretonneux in France.Credit:AWM/E02296 Courtesy Australian War Memorial

By war’s end, he divined that more land at Lake Condah would be carved up for soldier settlement. He decided to get in early.

On September 25, 1945 – three weeks after Japan had surrendered, ending the war – he wrote a letter to “the Secretary, Aboriginal Board”.

“Dear Sir, I am writing to you to see if you could give me any information regarding the cutting up of Lake Condah Mission Station into blocks for Aboriginal servicemen of this war,” he wrote. “If same was being done, I would like to make application for a block. Awaiting your early reply.”

No reply ever came.

Sure enough, the old mission station was carved up – and every farm went to a white ex-serviceman.

Mr Lovett, who knew how to break a horse, muster cattle, strain a fence, shear sheep and divine water – skills that might have made him a fine farmer – eventually got a job as head stockman on a big old squatting property, Gazette Station, near Penshurst.

There he lived for about 15 years, alone in a tin shed without power or running water, sending his pay cheques by post to his family at Heywood, 80 kilometres away.

Mr Lovett, you might imagine, was reminded every day of his status.

The station owner, a near recluse, lived alone in a vast Italianate mansion.

Running through the property was a waterway named Blackfellows Creek.

His son has fought for years to win compensation for the man of two wars who was denied land.

A decade ago, Uncle Johnny produced figures from accountants showing the loss of opportunity was worth more than $5 million. The federal government has always turned a deaf ear.

Uncle Johnny also insists the Australian Constitution of 1901, which specifically excluded Aboriginal people from laws made for other Australians, means neither he nor his father are Australian citizens, whatever laws were made since and whatever Constitutional experts might say.

“I’m never going to give up,” he says. “This has always been our country – there has never been a bill of sale by any black person to any white man for this country.

“My father only wanted equality. He served Australia at war, twice, and he was served up nothing but humiliation. Bucketloads and bucketloads of it.”

Tags: 'No, but, h, land, two, Wars', world
You may also like
Celebrities News