Police are investigating after two men were found fatally wounded in a rural township in Victoria’s south-west on Friday morning.

Emergency services were called at 10.20am to Kirkstall-Koroit Road in Kirkstall, about 22 kilometres north-west of the coastal city of Warrnambool. 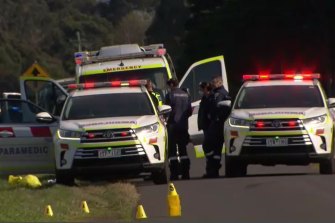 Police are investigating after two men were found fatally wounded in Kirkstall on Friday.Credit:Nine

Two men were discovered with injuries, but both died at the scene. Neither man has been formally identified yet.

In Nine News vision, police officers can be seen focusing their investigation on the roadside next to a grassy paddock. Yellow evidence markers have been placed on the bitumen and on the road’s shoulder.

Ambulances remain on the scene and police have taped off a segment of Kirkstall-Koroit Road.

“It’s very early circumstances in relation to what happened at that scene. We’re conducting our inquiries, but it’s still a very early point in our investigation,” he said.

“We do appeal to any witnesses. If they could call Crimestoppers … in relation to any information they may have and if they’ve seen any vehicles or people acting suspiciously in the area leading up to this incident.”

A spokeswoman for Victoria Police said the circumstances of the incident were yet to be determined. 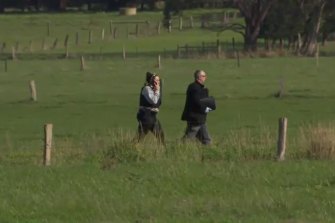 Detectives on the scene of the incident at Kirkstall on Friday afternoon.Credit:Nine.

“More information will be provided when known,” she said.

Anyone with information or dashcam footage is urged to contact Crime Stoppers on 1800 333 000.