The PNG government is planning to start a full national rollout in May, but experts say the country needs more help with the complicated logistics of delivering vaccines and healthcare to the country’s 9 million residents. 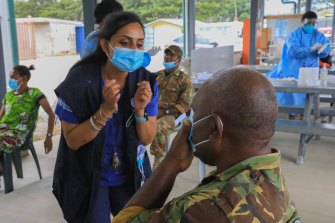 Australia has sent 8000 doses to PNG for healthcare workers, but has not received a response from Europe regarding a request to send 1 million AstraZeneca doses being held offshore to the developing country instead of Australia.

PNG has recorded more than 7400 cases of the coronavirus and 67 deaths. On Tuesday, a PNG dual national with COVID-19 died in a Queensland hospital. Because of low testing rates, the real impact of the pandemic is widely expected to be much greater.

Australian Prime Minister Scott Morrison said the government was looking at other options, including supply from other countries and using doses produced locally by CSL, but nothing was confirmed.

“We are still getting reports from our teams up in Papua New Guinea and we are working closely with other partners in the region to see how we can best address that challenge,” he said.

The vaccine rollout, when it does happen, will require overcoming huge logistical hurdles. Many parts of the country are not accessible by vehicles, and misinformation spread on social media is a major concern.

ChildFund Australia health advisor Tracy Yuen said the COVID epidemic meant having to share the same limited resources with more health needs. With the focus on COVID, particularly in the capital, she felt the provinces were being left behind.

Health workers were also turning patients away from facilities. Some facilities were full, but others were not open due to a lack of personal protective equipment and fears over the spread of COVID-19.

That meant treatment for infectious diseases was falling behind, as well as childhood vaccination programs and maternal health.

“PNG already has one of the highest maternal mortality rates in the region, and I’m quite worried to think how much worse that’s getting at the moment,” Yuen said.

“We’re really worried that pregnant women aren’t going to be able to access the safe delivery, and if they get turned back, that becomes a very dangerous situation for them.”

Chief Medical Officer Professor Paul Kelly said last month half of the women presenting at hospitals due to pregnancy were testing positive for COVID-19.

Tuberculosis treatment has also faltered due to the pandemic, Strong said.

“We’ve already seen reports coming out that COVID, is actually setting back the progress that we’ve made in addressing the high prevalence of TB in places like PNG by 12 years,” he said.

Yuen agreed the situation with TB was critical. In one instance, the TB inpatient ward in one of the areas where ChildFund works has been converted to a COVID isolation ward, forcing TB patients to sleep outside.

“It’s really unfortunate, TB patients already have poor immune systems, they shouldn’t be left out in the elements,” she said.

“The irony is, last I checked, there was no one in the COVID isolation ward, because the provincial health services haven’t been conducting a lot of testing, so there’s very few cases being identified. So these wards are also not being used as well as they should be.”

“It’s going to be a huge effort to be able to address this for PNG,” he said.

The Department of Foreign Affairs and Trade did not respond by deadline to questions about how many healthcare workers will be sent from Australia to assist PNG, and how Australia will help the PNG government get vaccines into hard to reach areas including the remote treaty villages.

Yuen said not-for-profits like ChildFund were able to help if needed.

“It would be a day’s trek between each of the villages … Crossing streams, crossing mountains; if there’s been a lot of rain they’ll be cut off as well,” Yuen said.

“The NGOs provide a really essential service, and they are so connected to communities that it would be a shame not to use them. But we’re on standby waiting to support.”