For the good of the United States, for the health of the country, in the interest of doing something drastic to mitigate a national disgrace, President Donald Trump should self-quarantine. 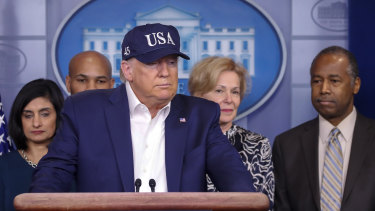 President Donald Trump speaks during a briefing on the coronavirus at the White House. Credit:AP

Every time he opens his mouth or makes an appearance, he puts the American people more at risk. His three years of flagrant and unremitting lying have made him the last person who should be the source of life and death information for 330 million Americans.

Trump should be isolated for his own health as well. He may have been exposed to a Brazilian official who tested positive for coronavirus and was at Mar-a-Lago with the President just a few days ago. Trump insists he has no symptoms, which of course doesn't mean he was not exposed. His shrug is the wrong message.

Nothing reveals character like a crisis. Friday's news conference was a panderfest to a man who kept saying "I don't take responsibility at all" for the lag in testing, all while insisting that "we're doing a great job". Then he lied again, saying it's "been true for a while" that anyone who wants a test can get one now. 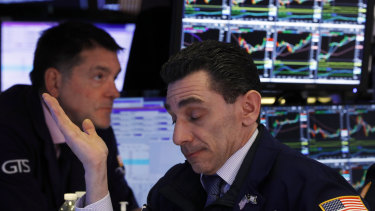 Trump's prime-time address to the nation last week was a full-blown disaster, blaming Europe, congratulating himself, fanning confusion and panic. Even reading a script from a teleprompter, this executive could not deliver a truthful, coherent message to a jittery nation.

Wall Street panicked. White House aides were quick to issue clarifications and corrections. No, the President did not intend to declare economic war on the world's largest trading bloc, in Europe.

Another thing about a crisis: the only asset you have is your credibility, as the late former Fed chairman Paul Volcker liked to say. Trump has zero.

Since the coronavirus outbreak, Trump and his senior aides have been deliberately misinforming the public – 28 falsehoods or dubious claims, by CNN's count. The President said cases were "going very substantially down" when they were growing exponentially. He said anyone who wanted a virus test could get one, when there were massive shortages. He said "this is a flu" though COVID-19 has a fatality rate 10 times greater.

Trump disbanded the pandemic response unit and he previously slashed funding for the Centres for Disease Control and Prevention. He reportedly overruled his own health officials who wanted to warn the vulnerable about flying. In the early days of the outbreak, his administration missed a chance to ensure more widespread testing. Many lives could have been saved.

On Monday, he said: "Nothing is shut down. Life and the economy go on." Those are the words of a bullshit artist trying to gaslight his way through a pandemic.

No one close to Trump has the guts to say what needs to be said: Stop talking! Now. Don't utter another word. Put your phone away. Go to Mar-a-Lago and play golf, which is to say resume your normal schedule. He can have his Big Macs brought to him, as always. He just has to go dark.

Let the head of the National Institute of Allergy and Infectious Diseases, Dr Anthony Fauci, who has just the right mix of bedside manner reassurance and give-it-to-me-straight gravitas, do the daily briefings. Let Vice-President Mike Pence handle the logistics. Let Congress finish up with a package that will offer free testing and give financial relief to the most vulnerable. And allow career government servants – the deep state pros who will keep this listing ship of state from sinking over the next months – to do their jobs.

Trump looked at the sun during an eclipse and nothing happened to him, so maybe he feels invulnerable. But he also will never accept any responsibility for months of government inaction. As the writer David Frum said, "The rooster who took credit for the sunrise is outraged to be blamed for the sunset."

In addition to credibility, a leader needs to express empathy. Trump is sociopathic on this front. In a hospital visit after the mass shooting in El Paso last year, he was incapable of showing simple human compassion to family members of victims; instead, he bragged about his crowd size from a previous rally.

He told the grieving widow of a slain American soldier that her husband "knew what he signed up for". Jay Inslee, the Governor of Washington, the state hardest hit, "is a snake", said the President.

In his bizarre appearance at the CDC a week ago, Trump wore a silly campaign hat, patted himself on the back and spoke nonsense about his medical expertise. It was like showing up at a funeral in beach clothes and asking what time is happy hour.

And what to make of that picture the President retweeted of him fiddling, presumably while Rome burns, with a tag line: "My next piece is called … Nothing can stop what's coming?" The man is sick in the head.

Given a chance to reach across the pond and offer condolences to long-time European allies in last week's Oval Office address, Trump said nothing positive and put up a travel wall. With one exception: he exempted the countries where three Trump-owned golf courses are located.

Tom Hanks, in just a few words revealing that he and his wife had tested positive for coronavirus, was the best American voice of last week.

Trump thinks he's Churchill, the man of the hour. He's Neville Chamberlain, the man who couldn't see the world threat at his doorstep.