The Victorian government will pay a Melbourne-based public transport company $2.3 billion over about nine years to operate a fleet of buses and introduce hundreds of electric and hybrid vehicles into the city’s system.

Minister for Public Transport Ben Carroll announced on Saturday the large contract had been awarded to Kinetic, which currently operates SkyBus and other local routes across Australia and New Zealand. 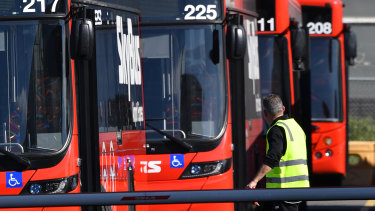 Kinetic, the Melbourne-based operator of SkyBus, has been awarded the $2.3 billion contract. Credit:Joe Armao

The contract for the Metropolitan Bus Franchise, which operates about a third of the city’s public bus services, will run from January 21, 2022 until June 2031.

Kinetic will introduce five fully electric buses into the city’s network by June next year and by mid-2025 will have introduced 36.

“This also really jump-starts our transition to zero-emissions buses.” 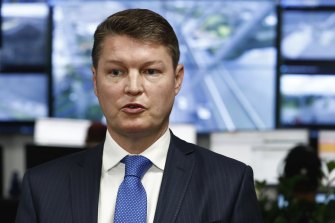 Roads minister Ben Carroll said hundreds of electric and hybrid buses are on the way.Credit:Darrian Traynor

By the end of the contract in 2031, Mr Carroll said more than half of the franchise fleet – 341 out of 537 buses – would be replaced with low or zero-emissions vehicles.

The new buses would be made at coachbuilder Volgren’s manufacturing facility at Dandenong South, where Mr Carroll said the company had several hundred employees.

“[Buses] have been the most resilient form of public transport coming out of COVID,” Mr Carroll said.

“In Victoria, we want buses no longer to be the third choice for public transport, we want them to be a first choice.

“Every bus has the opportunity to take essentially 50 cars off the road.”

The Metropolitan Bus Franchise is currently run by Transdev, and the Victorian government said the Kinetic takeover would see “an uplift in operational performance, driving greater reliability and a strong focus on customer outcomes and increased cleaning”.