St Petersburg: Russia’s premier business conference featured a panellist, Katerina Tikhonova, who was identified as the deputy director for the Institute for Mathematical Research of Complex Systems at Moscow State University. 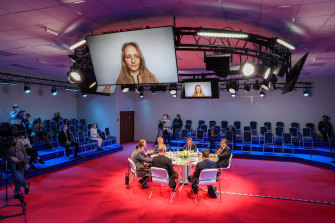 The Russian leader has never publicly identified his children other than to say he has two daughters. That makes for an odd wink-and-nod scenario every time they appear. Everyone knows they are Putin’s children, but few dare say so and go against Kremlin policy.

This dance is likely to become increasingly tricky. Tikhonova and Putin’s other daughter, genetics researcher Maria Vorontsova, have gradually boosted their public profiles.

They’re not directly involved in politics, but they do hold influential positions in businesses that have close ties to state enterprises.

Tikhonova, 34, spoke via videolink at a session of the St Petersburg International Economic Forum, Russia’s answer to the annual business conference in Davos, Switzerland. 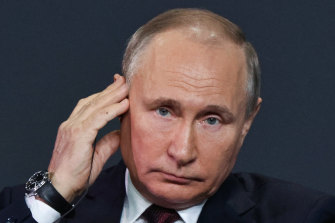 She was broadcast on big screens above a roundtable that featured members Russia’s elite: heads of Russia’s top universities, Russia’s justice minister and Kirill Dmitriev, the head of the country’s sovereign wealth fund.

Her relationship to Putin was not mentioned at any time. The only hint that she may have been even more important than her title suggested was in the moderator’s formal reference to her by her first name and patronymic, Katerina Vladimirovna.

Putin has long preferred intense secrecy when it comes to his family. He had never confirmed the identities of his daughters even though they have been reported by Russian independent and foreign media outlets. But their status and growing influence in Russia’s scientific and business communities is undeniable.

The Russian investigative news outlet Proekt reported that Putin has a “secret” third daughter, a teenager who he fathered with a lover, but the girl’s relationship with Putin has not been clearly established.

Tikhonova and Vorontsova are the daughters of Lyudmila Putin, who was married to Putin for three decades before they divorced in 2013. She stays out of the spotlight and lives in France.

Since 2018, both – Vorontsova has been reported to be the eldest – have been appearing on state television in special reports about their respective projects. Vorontsova is involved in state-funded projects dealing with genetics. The channels have mentioned their connection to Putin.

The approach runs counter to other countries, where the children of world leaders are often in the spotlight. Former president Donald Trump’s children had influential roles in his campaign and administration. President Biden’s son, Hunter Biden, became a top target for Trump and his allies during the 2020 presidential campaign.

In a six-minute speech at Friday’s panel, Tikhonova advocated for increased investment in what she called “breakthrough technologies,” alluding to her other project, the Innopraktika Fund, which says its mission is to find business applications for complex scientific developments. Members of its board include heads of Russia’s key state oil and gas enterprises.

When Tikhonova was giving her closing remarks, moderator Nikolai Kropachev, the dean of St Petersburg State University, interjected with a joke, only to be quietly shushed by the justice minister who told him not to interrupt her.

Putin rarely even makes vague references to his children. An exception was last year, when in announcing the approval of Russia’s first coronavirus vaccine, Sputnik V, Putin said one of his daughters had taken the vaccine. He did not refer to her by name.

Alexei Venediktov, editor in chief of the Echo of Moscow radio station, said at the time that Putin was referring to Tikhonova, who has close ties to the vaccine’s chief lobbyist, Dmitriev. Tikhonova and Dmitriev’s wife, Natalia Popova, work at the Innopraktika Fund together and were university classmates.

Popova was among the first to be vaccinated with Sputnik V, according to a state television report, and got Tikhonova interested in the jab, Russia’s independent Open Media outlet said. That might have helped secure Putin’s support for it.

Putin has dodged questions about the identity of his daughters in years past, citing security concerns. They were both born in the 1980s, when Putin was a KGB spy.

In 2015, at his annual end-of-year marathon news conference, Putin was asked about the truthfulness of a Reuters news agency report that Tikhonova is his daughter. He did not confirm it, but said his daughters “are not involved in business or politics.”

“My daughters live in Russia and studied only in Russia. I am proud of them,” he said. “They speak three foreign languages fluently. I never discuss my family with anyone.

“Every person has a right for their fate, they live their own life and do it with dignity.”

Then in 2019, at that year’s end-of-year Putin news conference, Putin was again asked about the identity of his daughters.

BBC Russia reporter Farida Rustamova told Putin that both Tikhonova and Vorontsova had become more involved in Russia’s business scene and his dodge in 2015 no longer applied.

“Your old friends, managers of state companies, are helping these two women with their business operations,” Rustamova said. “We can see that television channels have started showing them very often. Everyone knows them and what they look like today. This is an open secret.

“Here is my question: Tell me, please, when will you admit that they are your children, and when will they open themselves to society, just like the children of other world leaders?”

Putin again did not utter the name of either woman.

“You just asked a question, related to business. You mentioned one woman, you mentioned another,” he said. “You just stated some facts. That’s not enough. Dig around a bit more and you’ll understand what business they have and whether they have any at all and who owns what and who helps whom.”

Tags: be, daughters, may, Putin's, they’
You may also like
Celebrities News