When Prince Andrew appeared in a BBC interview in 2019 to defend his relationship with Jeffrey Epstein, he was asked why he stayed at the late financier’s home in New York after the American had pleaded guilty to sex offences in 2008. In an awkward response, the Duke of York, the Queen’s third child, admitted it was a mistake but said he had wanted to tell Epstein in person that their friendship must end. “My judgment was coloured by my tendency to be too honourable,” he insisted. 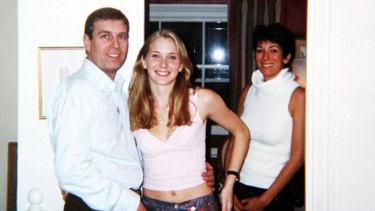 Prince Andrew allegedly pictured with Virginia Giuffre at the home of Ghislaine Maxwell (right) in London in 2001.

For a man of “honour”, since that disastrous TV interview Prince Andrew has shown what appears to be a determined resolve to avoid further scrutiny over his dealings with Epstein. After the prince withdrew from royal duties and claimed to be willing to help investigators, the top federal prosecutor in Manhattan went public saying Andrew had repeatedly refused to provide assistance.

The stonewalling has continued. In a US lawsuit filed last August, one of Epstein’s victims, Virginia Giuffre, claims Andrew sexually abused her when she was 17 at Epstein’s mansion in New York, on the financier’s private island in the US Virgin Islands and at a home in London owned by Ghislaine Maxwell, who was found guilty last week of sex trafficking.

Prince Andrew has vehemently denied all allegations. He has also used every legal means at his disposal to try to shut down the case. From the outset, his lawyers have been ducking and weaving, claiming the legal papers had not been properly served on him in Britain. The English High Court eventually agreed to intervene, saying it would serve the papers if the two parties could not find a way to do it themselves.

The royal legal team also argued Ms Giuffre could not file a lawsuit in the US because she has lived in Australia for all but two of the past 19 years, has an Australian driver’s licence and now lives in Perth, where she has been raising three children with her husband, who is Australian. US judge Lewis Kaplan made short work of that argument, saying the trial could go ahead.

The latest potential roadblock involves a 2009 settlement agreement between Epstein and Ms Giuffre. In the $US500,000 deal, which was made public on Tuesday (AEDT), Ms Giuffre agreed to provide a release from liability for “any other person or entity” who could have been a defendant against claims involving Epstein’s behaviour. Prince Andrew’s legal team claims this protects him from any further legal action.

But even if the lawsuit is thrown out on this ground, the reputation of Prince Andrew and the royal family will be tarnished. The Queen herself is reportedly contributing millions of pounds from her private income to pay for her son’s US and British legal teams. Prince Andrew has done everything he can to deny Ms Giuffre her day in court. He has not produced evidence of the strange sweating condition he mentioned in his BBC interview, or his presence at a pizza restaurant that he offered as an alibi. Instead, he appears to be seeking to avoid questioning entirely.

Yes, Maxwell has been found guilty. But every account of Epstein’s crimes suggests more people were involved. Several people have been named as having been hired by Epstein to help in the procurement of young women, and a number of wealthy men may well be nervous about whether Maxwell will start naming names to reduce her jail term.

The many girls sexually abused by Epstein and allegedly others deserve justice. And the reality is that those who seek to avoid the courts in this case on legal technicalities are unlikely to find doing so is enough to restore their reputations.