Revealed: The parents who spend £7,000 on 300 presents for their 22 children… and how the horror of home-schooling during lockdown FINALLY persuaded them to stop having babies

Yes, it took a pandemic, but Sue Radford has finally stopped having children.

It has been more than two years since the woman at the helm of Britain’s biggest family last fell pregnant, with her 22nd child, and she confides that she hasn’t felt broody at all since.

‘We’re definitely done! Definitely. One hundred per cent,’ she says.

It means this Christmas will be the first for decades where she hasn’t been pregnant, nursing or pondering whether she could feasibly have another child.

She seems stunned herself by this reverse seasonal miracle — although her husband Noel’s face says, ‘Praise be!’.

Sue, 46, has vowed before that she’s done with baby-making. After Archie (baby no 20) she declared that she had retired her womb. Ditto after Bonnie (baby no 21).

The couple’s youngest, Heidie (baby no 22), will turn two in April, so maybe she does mean it this time.

What broke the cycle? Biology, it seems. And Chemistry, and French. Home schooling, to be more precise. 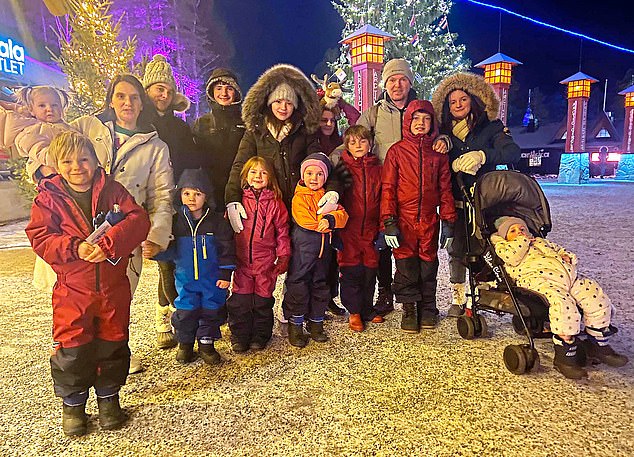 It has been more than two years since Sue Radford, the woman at the helm of Britain’s biggest family, last fell pregnant, with her 22nd child, and she confides that she hasn’t felt broody at all since

At the start of the first lockdown, in March last year, Sue had a newborn, a clutch of toddlers and nine school-aged children who all huddled round the dining table, fighting over devices, losing log-ins, trying to work out their Zooms from their Teams, and sending the wifi into meltdown. It was hell. ‘And maybe it put me off having children,’ Sue concludes, cheerily.

Sue, Noel and their brood, who live in a ten-bedroom converted care home in Morecambe, Lancashire, first came to public attention back in 2012, when they appeared in a Channel 4 documentary, 15 Kids And Counting.

And their new Christmas special, airing on Channel 5 on Sunday and offering a jaw-dropping glimpse into their epic festive preparations (complete with live turkey, but we’ll come to that) is called 22 Kids And Counting.

‘Sophie has three, Millie has one, Chris has three but he also has four step-children, which we count as ours, so that’s 11 grandchildren so far, although only one lives with us full time.’

Establishing who does live in this house is a challenge.

Always included in the numbers is baby Alfie (baby no 17) who was sadly stillborn in 2014.

Granddaughter Ophelia (whose mum is Millie) lives at the house too. 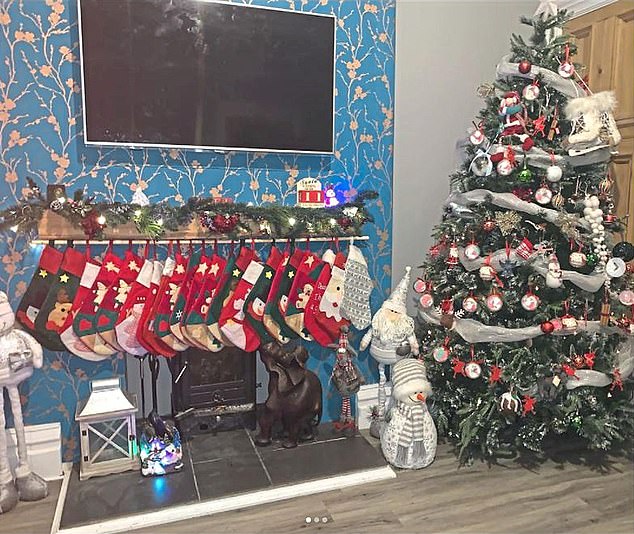 The family’s new Christmas special, airing on Channel 5 on Sunday and offering a jaw-dropping glimpse into their epic festive preparations (complete with live turkey, but we’ll come to that) is called 22 Kids And Counting

And let’s not forget the animals: Bluebell the French bulldog has joined us on a Zoom call at the kitchen table today, but the family also has three other dogs, Lola, Ivy and Mabel. ‘And two rabbits!’ says Noel.

At least they have a lot of children to pitch in with the animal care. ‘Oh, the kids will take them for the odd walk, but mostly it’s me because the dogs are my thing really,’ says Sue. ‘I love dogs. I’d have hundreds of dogs.’

Noel nods. ‘They are your fur babies, aren’t they?’

I have interviewed the Radfords several times over the years, and have always marvelled at how unstressed Sue is, considering.

In 2017, she was literally just back from the hospital after having Archie when I spent a morning — a school morning, too! — observing the organised chaos of breakfast, bag hunting and marching the kids off to three different schools.

Sue was serene throughout. This is a woman who will never be fazed by anything, I concluded, wrongly.

She was fazed by lockdown.

This time last year they were counting the members of the family who had contracted Covid. Noel and Daniel definitely had it, but Sue reckons that she and Millie did too.

Whatever horrors the rest of us went through, this family did as well, but multiplied.

Noel runs a bakery, which has ultimately done well out of the pandemic, but there were hairy moments when they had to shut down because of illness and staff members isolating. 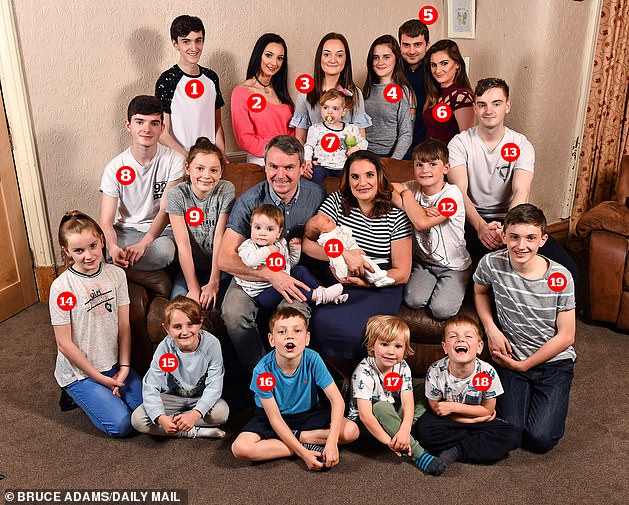 It was the homeschooling, though, that brought Sue to the brink, leading her to tell the health visitor that she could not cope — for the first time ever.

‘There was one day the health visitor came and I said, “I just cannot do this.” She said, “STOP! You have to stop getting yourself stressed. Do what you can and they will catch up when they go back to school.”

‘It was better after that, when I accepted that you can only do your best.’

Obviously muddling through is relative. On this catch-up we talk about their Christmas preparations and Sue chides herself for not having started earlier, but still admits she has been wrapping since September.

She is a demon present-wrapper. Just as she can put on a nappy in two seconds, so she can wrap a stack of presents in the time it takes everyone else (she looks sternly at Noel) to find the end of the Sellotape.

How many rolls of paper does she buy? ‘Between 50 and 70,’ she says, as the pair demonstrate their carpet-clearing operation after all the paper gets ripped off on Christmas morning.

The Radfords don’t really have a minimal approach to anything, so maybe it’s not surprising that they go over the top at Christmas.

This year even more so, Sue admits, ‘because last year we couldn’t really do it properly.’ 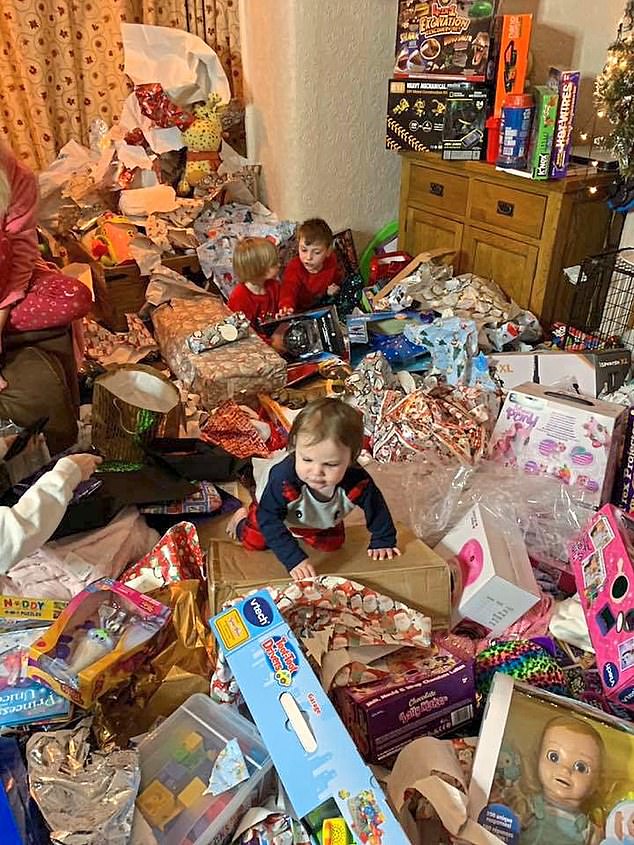 The Radfords don’t really have a minimal approach to anything, so maybe it’s not surprising that they go over the top at Christmas. This year even more so, Sue admits, ‘because last year we couldn’t really do it properly’

Next week, they will have 27 for Christmas dinner, and a few more souls on Boxing Day when her mother and Noel’s father come. Noel does the cooking, and she writes the lists. Actually, the food shopping and preparation is the easy part.

Every year, Sue does the big supermarket shop, picking up around 10kg of potatoes, 4kg of carrots, 60 Yorkshire puddings and 120 pigs in blankets. Every single child likes Brussels sprouts — although Sue doesn’t — so they buy 2.5kg of them. The family don’t actually like Christmas pudding, so dessert is trifle and cake.

The supermarket bill is around £400 — and that’s before they hit the butchers.

Usually they buy a supermarket turkey and a roast of beef, but this year Noel ordered a fresh turkey from a local farm.

Alas, he forgot to fill in the ‘oven-ready’ box, and the bird — still very much alive and squawking — was delivered to the house.

Sue’s horror, and the eventual chase around the garden to get it swapped for an oven-ready one, is captured on camera for the documentary.

It will be joined in the ovens (yes, plural; they have two) by a beef joint and a whole gammon. 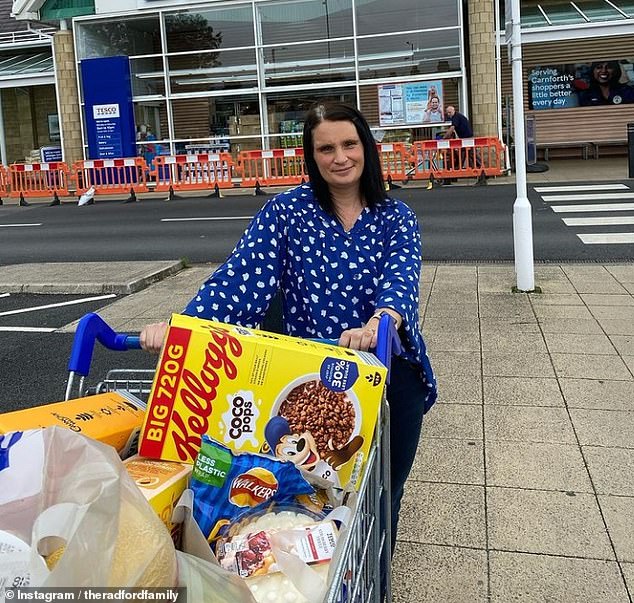 Every year, Sue does the big supermarket shop, picking up around 10kg of potatoes, 4kg of carrots, 60 Yorkshire puddings and 120 pigs in blankets. Every single child likes Brussels sprouts — although Sue doesn’t — so they buy 2.5kg of them

What an absolute fortune this family spends on Christmas, though. They admit the whole shebang costs them around £5,000 to £7,000, most of which goes on presents for the kids.

They buy roughly 300 presents, aiming to spend between £100 and £200 for each main present, ‘then bits and bobs’. The kids write lists of what they want, but they don’t always get their dream items.

This year, when shops are struggling with supply, they certainly haven’t got them. Sue and Noel have spent hours trying to source a particular Barbie doll’s house, a PS5 and a Scalextric set.

‘We have had to give up on the PS5 and we got the doll’s house eventually, but the cost was disgusting. It is supposed to be £240 but one site was offering it for over £700.’

The figures are mind-blowing, as is the scale of, well, everything.

Most years they have four Christmas trees, personalised baubles and stockings for everyone. On Christmas Eve they all get a box with a new set of pyjamas — matching, if possible. How do you even keep track of the sizes, especially with the little kids, who grow an inch when your back is turned?

More lists, says Sue. ‘And even if you get the wrong size it will fit someone,’ says Noel.

The question that is always asked is how the Radfords can possibly afford their lifestyle. They have famously never relied on benefits, and their bakery business, which focuses on pies, is clearly successful (they have just expanded into new premises), but still.

They are candid about this today, though. A good chunk of their income now comes from their TV work, and various social media sites. They are popular influencers, which means that Santa comes all year round. 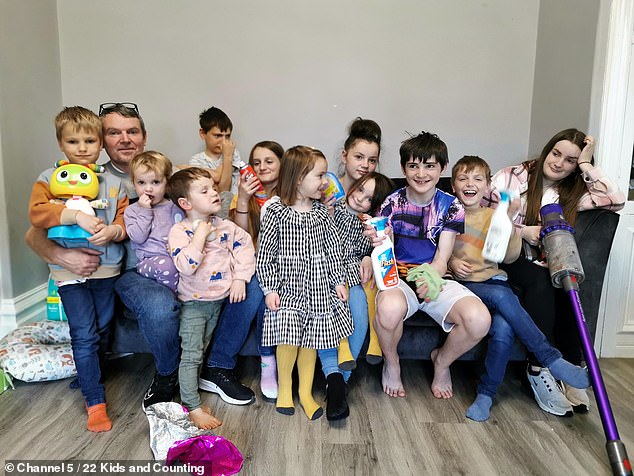 Sue said her brood, pictured with husband Noel left went through 16 pints of milk a day, three to four loaves of bread and could eat up to 80 yoghurts a week

Over the years they have accepted gifts, holidays, clothes and big-ticket household items to promote the products in return.

Sue says it ‘means the kids can have treats and holidays’. Their home has had lavish updates over the past few years and they now have a new roof, a hot tub and an outdoor cinema room.

The attention is a double-edged sword. While they have a huge fanbase, they also have their detractors. When they posted about donating toys to a charity this week, some criticised them for being ostentatious. ‘You can’t win,’ says Sue.

Is the social media side now their main focus? Absolutely not. ‘It takes a lot of work to keep that side going, but it won’t last.’

Noel affirms that the bakery will always be the priority, ‘because you can’t hand a YouTube channel down to the kids, can you?’. They certainly wouldn’t have been able to jet off to Lapland on a pre-Christmas treat last month — taking 13 of the children with them — if a TV company hadn’t been helping out with the bill.

This trip forms much of the documentary, and it does make for astonishing viewing. Taking 13 children to Lapland would be an achievement any time, but during the current situation?

‘It was lovely when we were there, but getting there was a nightmare,’ admits Sue. ‘We hadn’t travelled anywhere during the pandemic, then discovered that four of the kids’ passports had expired, and Heidie has never had one at all.’

Cue an emergency trip to the passport office in Liverpool.

Then there was airport security, and vaccine paperwork. Noel has his head in his hands reliving all this. ‘Travelling is one of the most stressful things, but this time it was even worse with all the masks and forms to fill in.’

They actually lose a child in the documentary (thankfully he hasn’t wandered far in the airport), but I ask if the opposite ever happens. Yes, says Sue, hilariously. ‘Noel has rounded up children who aren’t ours.’

Perhaps the true miracle is that the pair are still married, and still seem genuinely happy, if exhausted. I ask them what they have bought each other for Christmas, and Sue rolls her eyes. It’s the one thing on her list that has not been ticked off.

Noel shrugs. ‘That will be fine. I have everything I need.’

22 Kids And Counting At Christmas airs on Sunday, December 19 at 9pm on Channel 5.