Washington: Just a month ago, Donald Trump was basking in the most heady period of his presidency.

The Senate had acquitted him in his impeachment trial, lending him an aura of invincibility. His third State of the Union address, which focused on the booming US economy, drew rave reviews.

Trump's approval rating in the closely watched Gallup poll hit an all-time high. So did the Dow Jones Industrial Average. And so did his chances of re-election: 62 per cent, according to the betting markets.

Meanwhile, Trump's political opponents were in disarray. Demoralised after their technical meltdown in Iowa, Democratic voters were struggling to settle on a viable presidential nominee. The campaign of one-time front-runner Joe Biden was on life support. 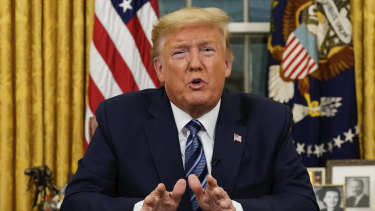 This recent history now feels like an eternity ago.

The dynamics of American politics, and Trump's re-election hopes, have been transformed by two seismic events over the past fortnight: Trump's haphazard response to the coronavirus outbreak, and the stunning resurrection of Biden's political career.

The emerging view that Trump was gliding towards a second term has been upended by a plummeting stock market and the emergence of a potentially formidable opponent.

"Bad news for the country is bad news for the incumbent," Mark Mellman, a veteran Democratic pollster, says. "The prospect of a recession is a calamity for Donald Trump."

'Down close to zero'

The Trump administration's response to the coronavirus started without any major hiccups.

On January 31, the administration declared a public health emergency and said it would deny entry to foreign citizens who had travelled to China in the previous 14 days.

This was seen by some at the time as a potentially xenophobic overreaction. But the decisive action no doubt saved American lives.

Since then, the administration's response has spiralled out of control. More than any other event in his presidency, the outbreak has exposed the inherent flaws of Trump's approach to governing – his fondness for falsehoods, chaotic decision-making and disregard for expertise.

As the number of coronavirus cases has mounted in recent weeks, Trump has appeared in almost complete denial about the seriousness of the problem.

In late February, Trump falsely claimed that confirmed cases were "going very substantially down" and would soon be "down to close to zero". Instead, the number of cases predictably shot up.

Last week, Trump toured the Centres for Disease Control and Prevention headquarters in a red "Keep America Great" cap and claimed: "Anybody who wants a test can get a test." 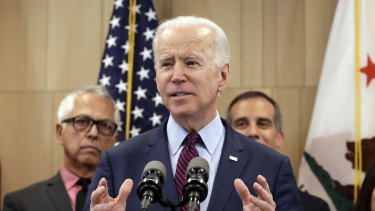 Biden's resurgence was driven by several factors – including his popularity with African-American voters and the belief he is the Democrats' most "electable" candidate.

But the coronavirus outbreak has played to his strengths. Exit polls from this week's primaries showed voters overwhelmingly trusted Biden, rather than Sanders, to handle a major crisis.

With Biden at the top of the ticket in November, Sabato says, the Democrats will be competitive in such states as Florida, North Carolina and Arizona, which would have been out of reach for Sanders.

"Biden is a good fit to go up against Trump," Sabato says. "He's a sponge who can absorb the anti-Trump sentiment in the community."

The central premise of Biden's candidacy – a return to an era of stability, decency and competence – is not necessarily inspiring. But in a country struggling to find its way out of a major economic and public health crisis, it may well prove to be a potent one on election day.

Tags: calamitous, fortnight, that, the
You may also like
Celebrities News