A three-year-old Syrian girl whose father taught her to laugh whenever she hears a bomb fall has safely reached Turkey.

Salwa was living in Sarmada, a province in the war-ravaged city of Idlib with her parents when her story touched the hearts of thousands on social media after her father posted a video of the pair laughing as bombs fell around them.

Her father, Abdullah Al-Mohammed, 32, came up with the novel way of protecting his daughter from the ‘psychological crisis’ caused by near-constant explosions. 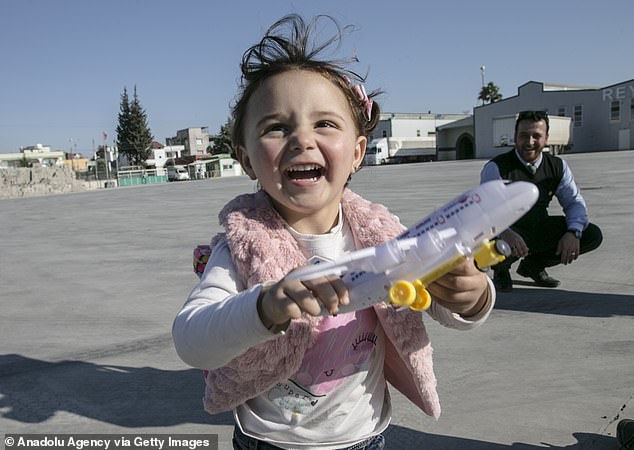 Syrian girl Salwa laughs with her new toys at the Cilvegozu border crossing in Hatay, Turkey 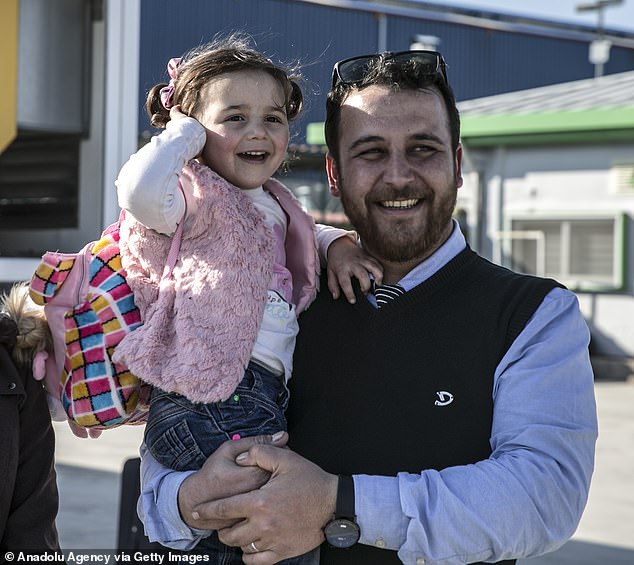 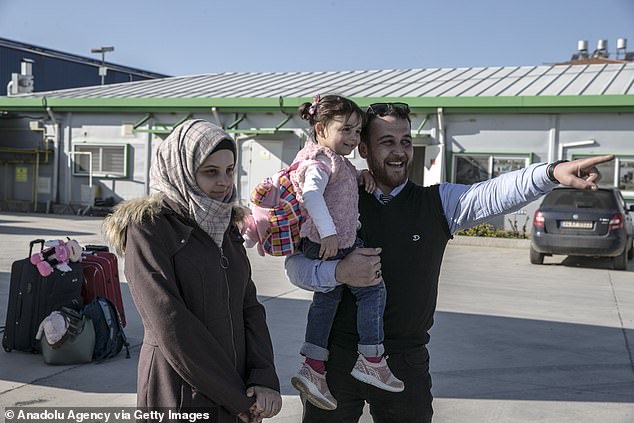 Syrian girl Salwa, with her father Abdullah Muhammed (R) and her mother at the Turkish border

The conflict is thought to have displaced 700,000 civilians from the city since December. Idlib province is home to some 3 million people.

The Turkish government helped Salwa and her parents cross the border from Syria to Turkey a week after a clip of the father and daughter went viral on social media, it has emerged.

Guardian reporter Bethan McKernan tweeted yesterday: ‘I am happy to report that 3-year-old Salwa and her parents have made it safely out of Idlib to Turkey. The family made headlines for a game where dad Abdullah got Salwa to laugh at falling bombs to protect her from trauma. 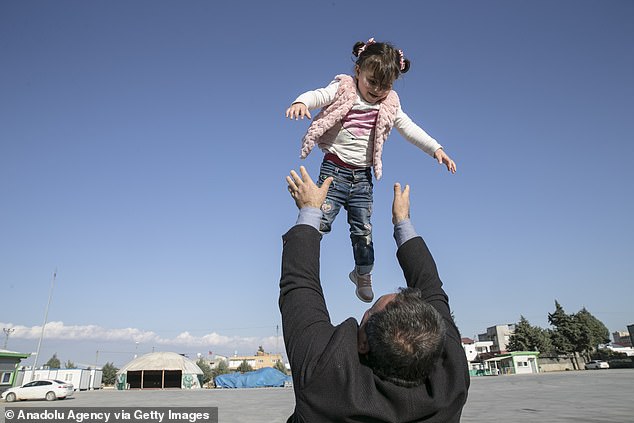 The Turkish government helped Salwa and her parents cross the border from Syria to Turkey a week after a clip of the father and daughter went viral on social media, it has emerged. Father and daughter pictured together at the Bab al-Hawa border crossing 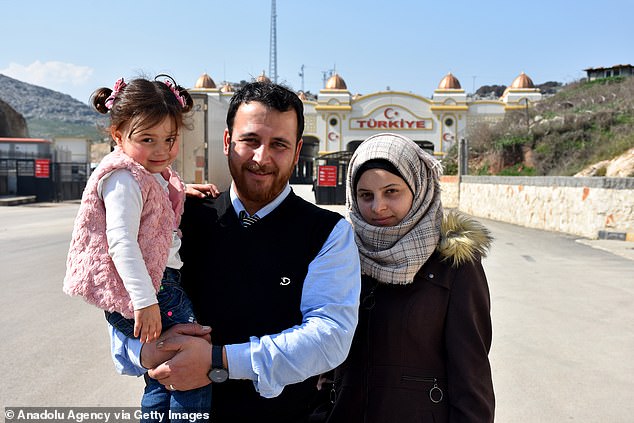 The family pictured at the Cilvegozu border crossing in Turkey 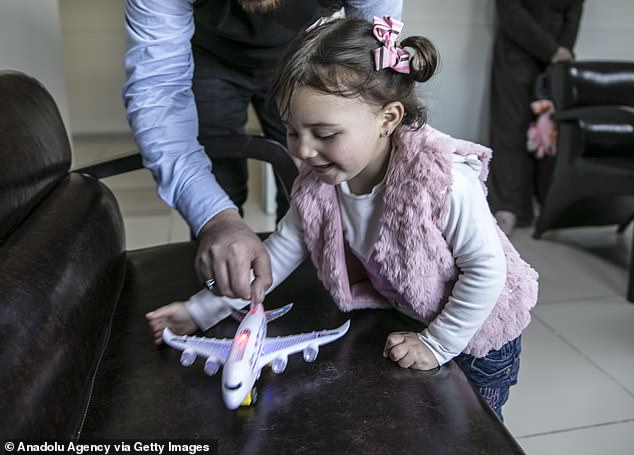 ‘For the first time ever, she can laugh at normal things.’

In a post on Twitter, the father demonstrated the game which he devised with Salwa while explosions were heard close to their home.

In the video showing the game, Mr Al-Mohammad is seen sitting down with his daughter perched alongside him.

As a rumbling sound gets louder, he asks her: ‘Is this a jet or a bomb?’ 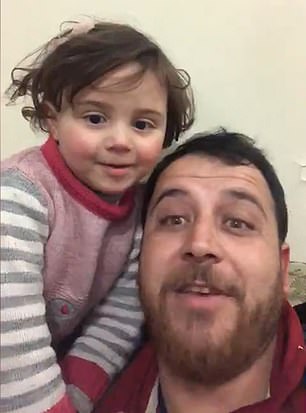 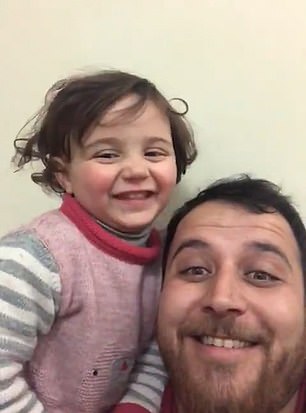 Syrian father Abdullah Al-Mohammad, 32, devised a game to make his daughter laugh every time a bomb landed near them in the city of Idlib, Syria. The family have since escaped Idlib for Turkey

She then replies: ‘A bomb, when it comes we will laugh.’

The video then captures the imposing sound of a bomb falling, prompting the little girl to burst into fits of laughter.

Mr Al-Mohammad adds: ‘Does it make you laugh?’

‘Yes, it is funny,’ Salwa replies.

The 32-year-old told Sky News that he said he devised the game to stop his daughter’s ‘psychological state from collapsing’.

‘She is a child who does not understand war,’ he said. 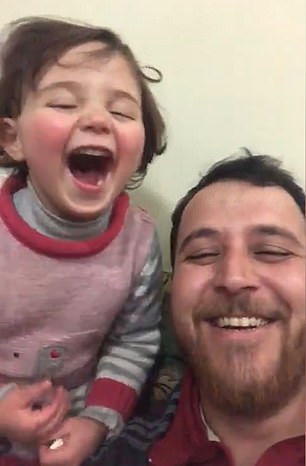 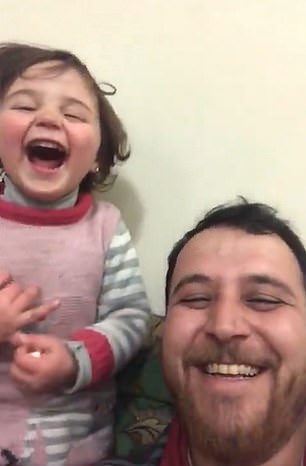 In a post on Twitter, the father demonstrated the game which he devised to protect his daughter from the ‘psychological crisis’ caused by near-constant explosions

‘I decided to teach Salwa this game to prevent her psychological state from collapsing. So as to not be affected by diseases relating to fear.’

The father added that he wanted to turn the sound of the bombs into a ‘source of happiness’.

He told Al Jazeera that children in the neighbourhood used to play with bang snaps which made a loud noise when thrown on the ground.

When Salwa got scared when they were used during the Muslim festival of Eid, he showed her that it was ‘just a toy’.

The video, which Mr Al-Mohammad shared on his Twitter account, has been shared thousands of times and has received more than 4,000 likes.

‘I needed to remove the fear from her heart,’ the father added. 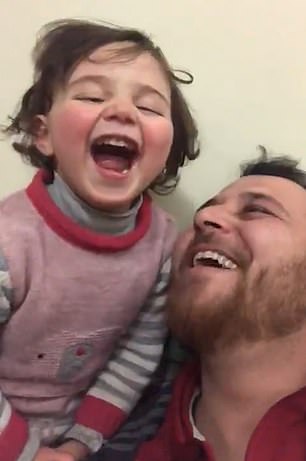 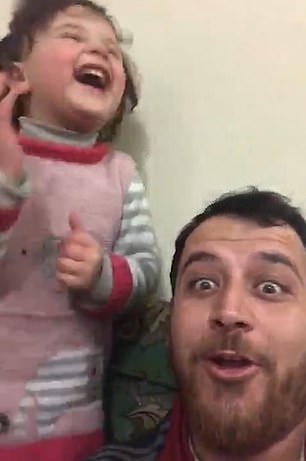 As the sound of an approaching bomb gets louder, the father says, ‘it is a jet or bomb?’ His daughter replies ‘a bomb, when it comes we will laugh’

‘I wanted her to associate these loud, frightening sounds to something that is light and amusing.’

However, Mr Al-Mohammed said he was worried that if the shelling continues as she gets older, his game will ‘no longer be enough’ to protect her mental state.

‘I want the world to know: We’re not terrorists as the regime paints us out to be,’ he said.

Near the Turkish border, the Idlib area is the last rebel stronghold after nine years of war in Syria.

Turkey said that two more of its soldiers were killed Wednesday in a Syrian government attack in northwestern Syria, as steady clashes between the two national armies continued to rack up casualties.

Turkey has sent thousands of troops into the area to support Syrian insurgents holed up there, but hasn’t been able to stop the Russian-backed Syrian government offensive to retake the Idlib province.

Tags: girl, Syrian, taught, to, was, who
You may also like
Celebrities News