The US Supreme Court appears poised to completely overturn or at least gut the central provision of the landmark Roe v Wade abortion decision, a move that would severely limit access to legal terminations and further supercharge America’s vicious left-right culture wars.

The Supreme Court has begun hearings on the most consequential challenge to American abortion rights in decades, a case centred on a Mississippi law that would ban almost all abortions after 15 weeks of pregnancy.

As well as establishing a constitutional right to abortion, the 1973 Roe decision barred state governments from banning abortion before foetal viability – widely estimated to be around 24 weeks, significantly later than the Mississippi law. 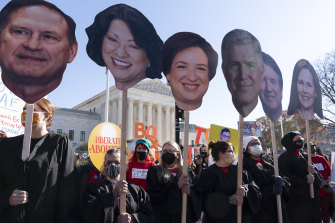 Abortion rights advocates holding cardboard cutouts of the Supreme Court Justices, demonstrate in front of the US Supreme Court, as it hears arguments in the case from Mississippi.Credit:AP

There are six conservative justices on the Supreme Court compared to three left-leaning members.

Questioning from the Republican-appointed justices during the first day of oral arguments strongly suggested they were likely to uphold the Mississippi law, delighting conservatives who have campaigned for Roe to be overturned for decades.

Saying he believed there were six votes to uphold the Mississippi law, Republican Senator Josh Hawley added on Twitter: “And after listening to the argument, I believe this could be the case that finally reverses the great injustice of Roe.” 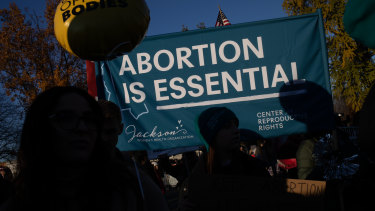 Pro-choice demonstrators protest outside the US Supreme Court at the start of one of the most significant abortion rights cases in decades. Credit:Bloomberg

Hawley said he believed that Amy Coney Barrett, appointed to the court last year by Donald Trump just before the November election, was likely to provide the crucial vote on whether Roe is overturned.

Abortion-rights activists, meanwhile, have greeted the news with alarm, organising protests outside the Supreme Court.

Around a dozen Republican-controlled states have so-called trigger laws in place that would make abortion illegal almost immediately if the Supreme Court was to overturn Roe.

In Texas, a state of almost 30 million people, Republican Governor Greg Abbott recently signed into law a bill that says nearly all abortions would become illegal in the state 30 days after Roe is overturned.

Doctors who performed abortions after that point in Texas could then be sentenced to life in prison.

Justice Brett Kavanaugh, appointed by Trump in 2018, attracted much attention by citing a list of cases in which the Supreme Court had overturned long-held precedents.

He said perhaps it was best for the court to be “neutral” on issues on which the Constitution is silent.

Justice Sonia Sotomayor, appointed to the court by Barack Obama, said overturning Roe would deepen the sense among the public that the justices were acting as political figures rather than applying the law impartially.

“Will this institution survive the stench this creates in the public perception, that the Constitution and its reading are just political acts?” Sotomayor asked. “If people believe this is all politics, how will we survive? How will this court survive?” 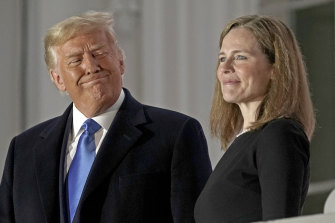 US President Donald Trump rushed the appointment and swearing in of Amy Coney Barrett as Associate Justice of the US Supreme Court in 2020.Credit:Bloomberg

The Supreme Court is expected to hand down its decision in June next year, raising the likelihood that abortion rights will be one of the dominant issues during the November midterm elections.

Chief Justice John Roberts, appointed to the court by Republican George W Bush, appeared most interested in a narrow ruling that would uphold the Mississippi law, but not explicitly overrule Roe.

“That may be what they’re asking for, but the thing at issue before us today is 15 weeks,” Roberts said. 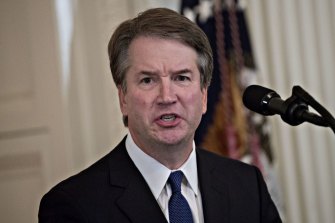 Samuel Alito, also appointed by Bush, disagreed, saying that “the only real options we have” are to re-affirm the Roe decision or to overrule it.

An ABC News-Washington Post poll last month found that 60 per cent percent of Americans believe Roe should be upheld, while 27 per cent say it should be overturned.