An erupting volcano in a lightning storm, a hummingbird eye-to-eye with a snake and a rocket launch are just a few of the striking photographs that were captured at the perfect moment in a competition.

The stunning images were snapped at just the right time and showcase the beauty of the natural world in The Perfect Moment competition.

First prize was awarded to a fascinating image capturing the moment a storm was created during a violent volcanic eruption in Chile, showing hundreds of lightning bolts joined together in an intricate ‘net-like’ structure above plumes of molten lava.

Second place was awarded to a fascinating photo of a green-crowned hummingbird hovering in mid-air, eye-to-eye with a small, green pit viper which is dangling by its tail from a branch.

Other photographs that were crowned runner-ups was a photo of a lamb crossing a rickety wooden bridge, followed by a herd of more than nine sheep and an image of two praying mantises perched on a branch.

The contest’s judges, Max Rive of the Netherlands and John Weatherby of the USA, called the photo ‘truly spectacular’. 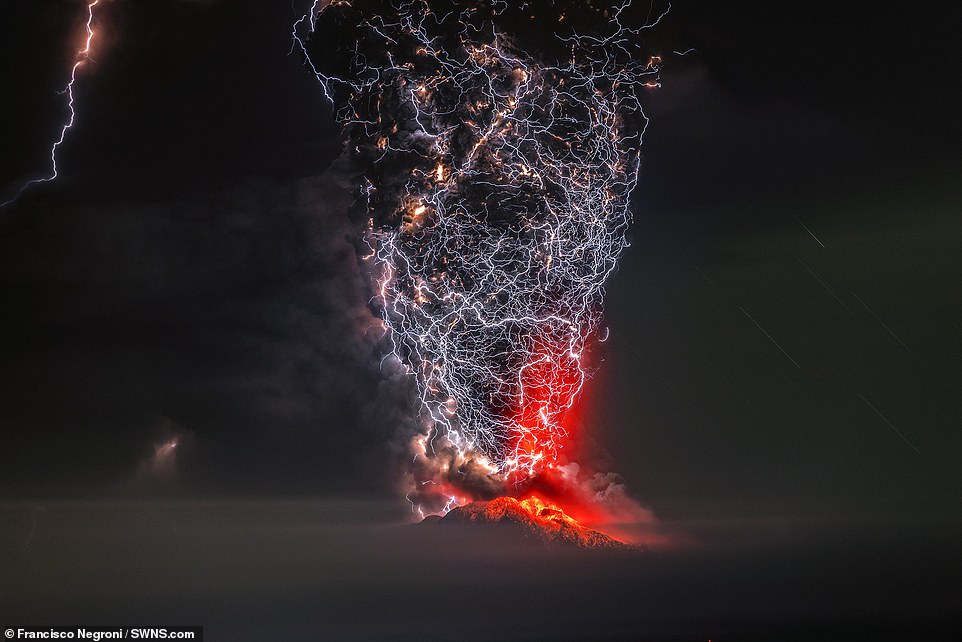 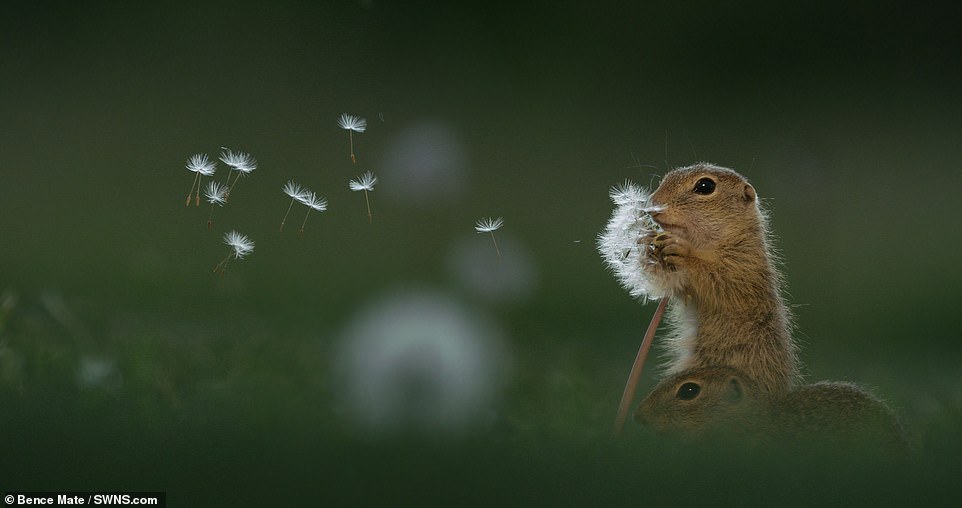 Runner up: A European ground squirrel (Spermophilus citellus) in an unknown location nibbling on a dandelion stalk 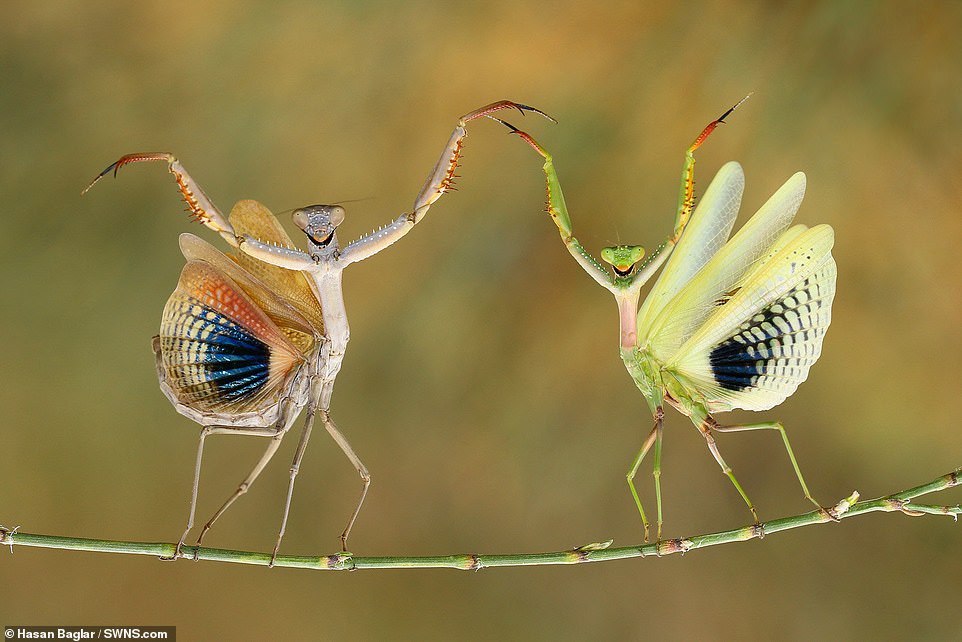 Runner up: Competition finalist Hasan Baglar submitted an amusing photograph of two praying mantises perched on a branch, their front legs stretched up in the air, and their colourful wings outspread in Cyprus 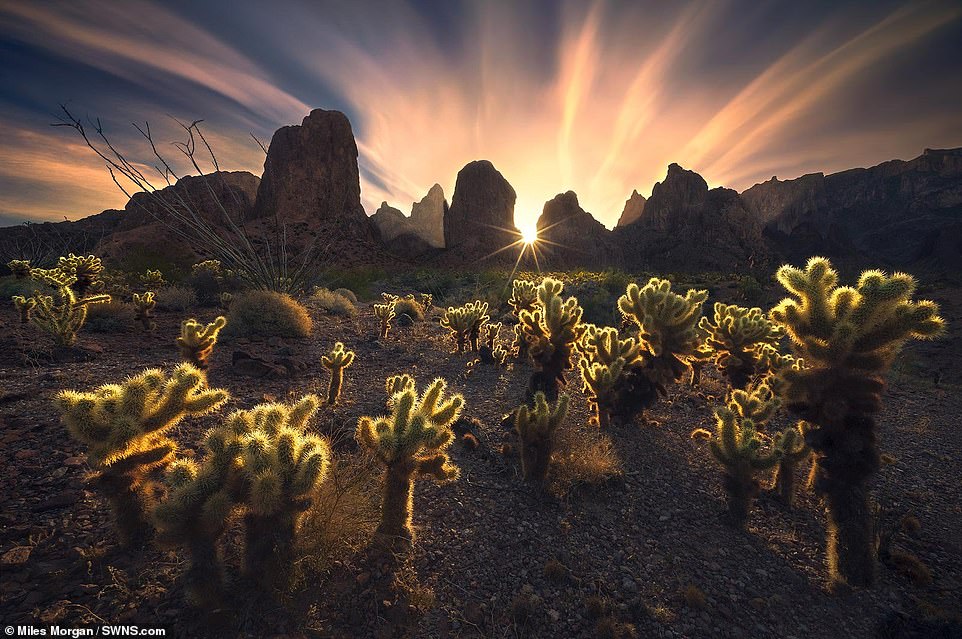 Runner up: An incredible image shows a stunning red sun rising over rocky peaks in the Kofa Mountains, Arizona, USA 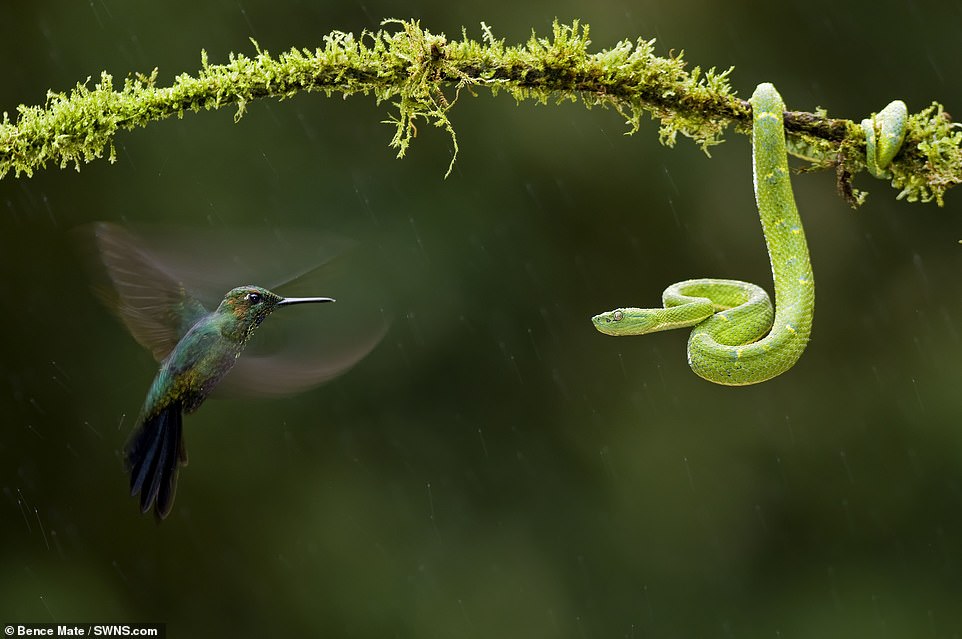 Second place: ‘Eye-to-eye’. The fascinating photo shows a green-crowned hummingbird hovering in mid-air, eye-to-eye with a small, green pit viper which is dangling by its tail from a branch. The on-guard hummingbird, photographed with its wings beating rapidly, squared off against the viper in order to protect its nesting young, making squawking sounds and dancing in mid-air around the snake 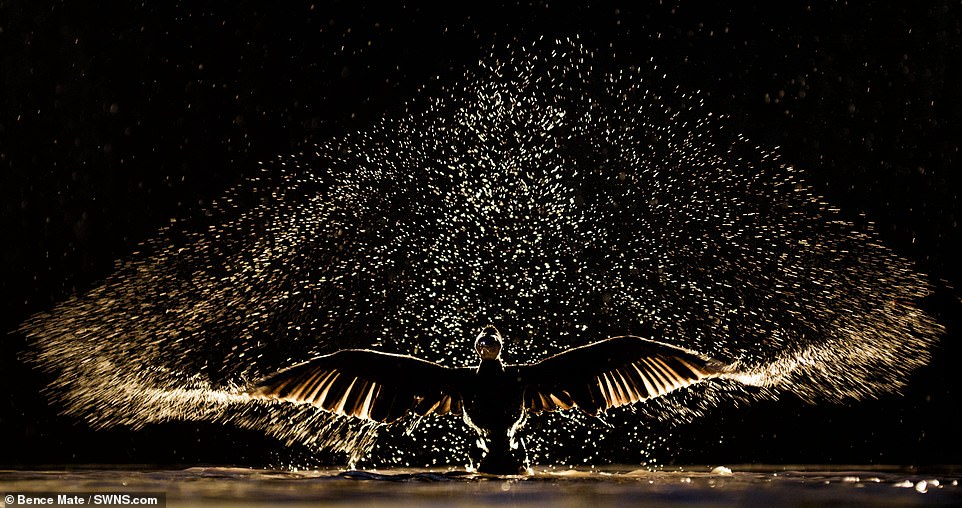 Third place: Droplets of water form a triangle as a cormorant shake water off its wings at Kiskunság National Park in Hungary 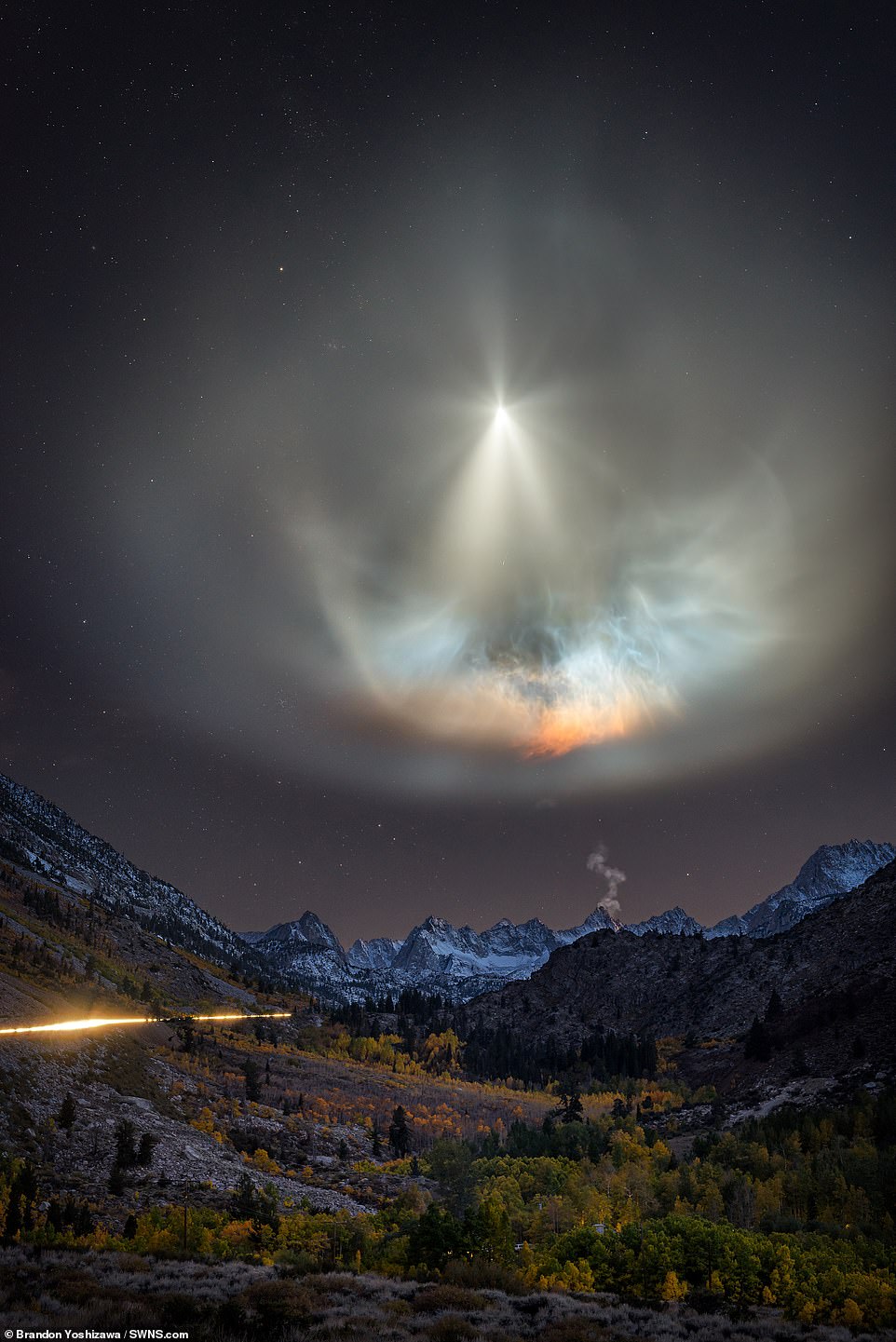 Fourth place: A SpaceX rocket launch over Aspendell, California. The light is from the setting sun hitting the rocket’s exhaust plume. This shot is from when the first and second stage boosters separated and the exhaust almost took on the form of a deep space object 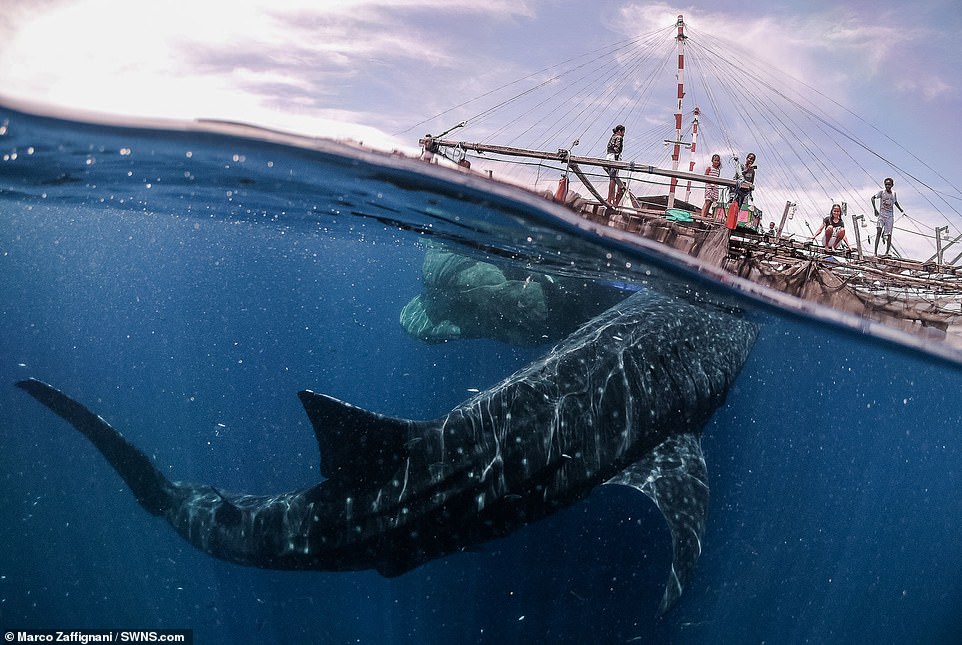 Runner up: This fascinating image, in an unknown location, shows a boat’s close encounter with a friendly whale shark 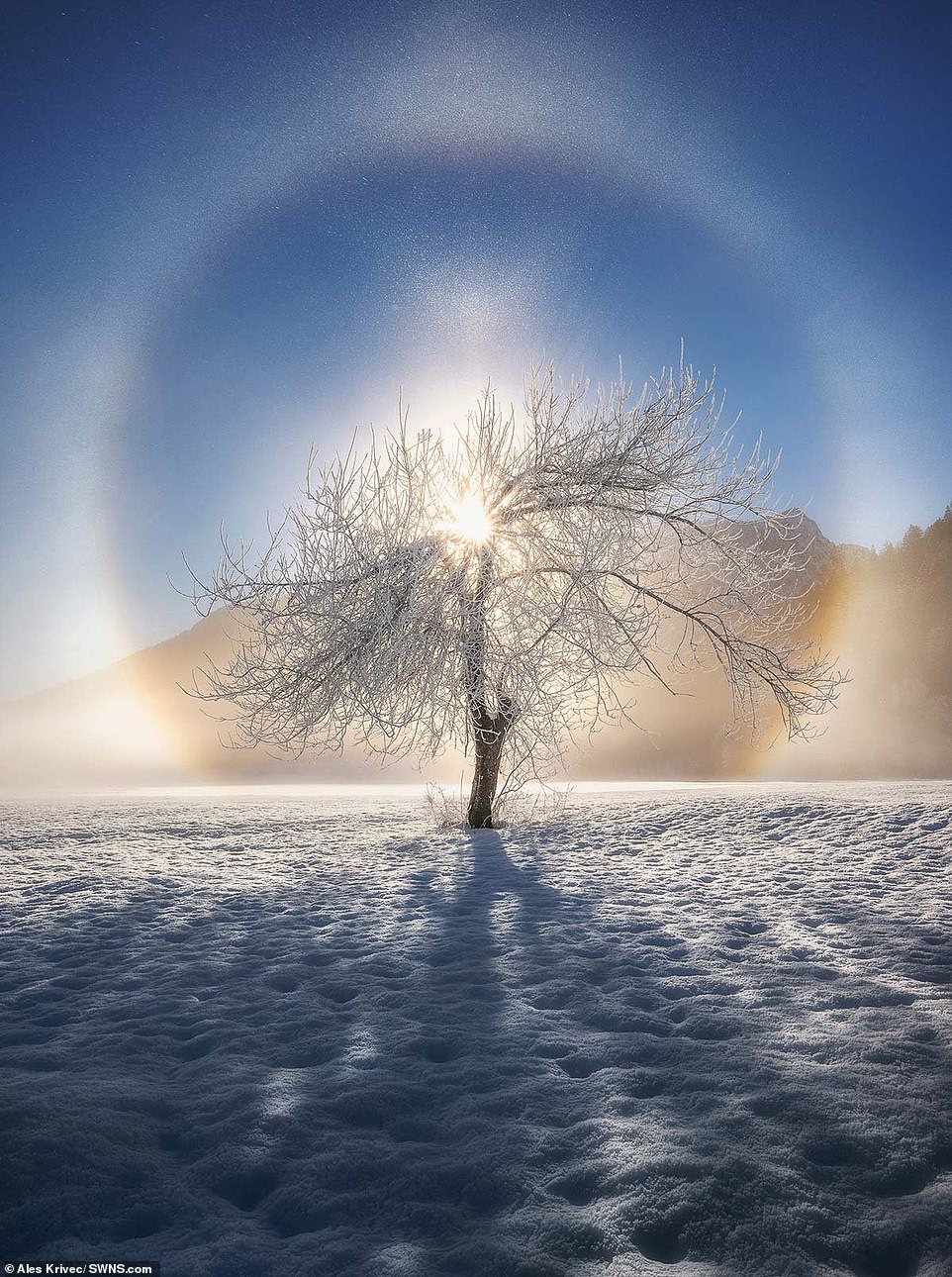 Runner up: Thsi breathtaking image shows an ice halo around a tree in Ratec, Slovenia. Ice halos occure when when tiny crystals of ice are suspended in the sky. Like raindrops scatter light into rainbows, the crystals of ice can reflect and refract light, acting as mirrors or prisms 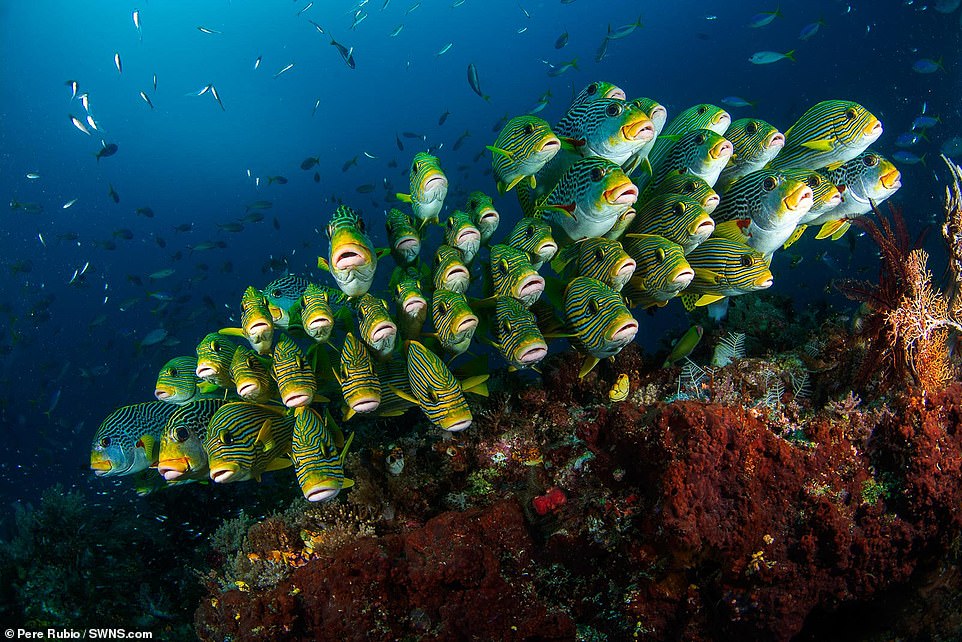 Runner up: A colourful image shows a shoal of Sweetlips fish swimming above coral reef off the coast of the Raja Ampat Islands 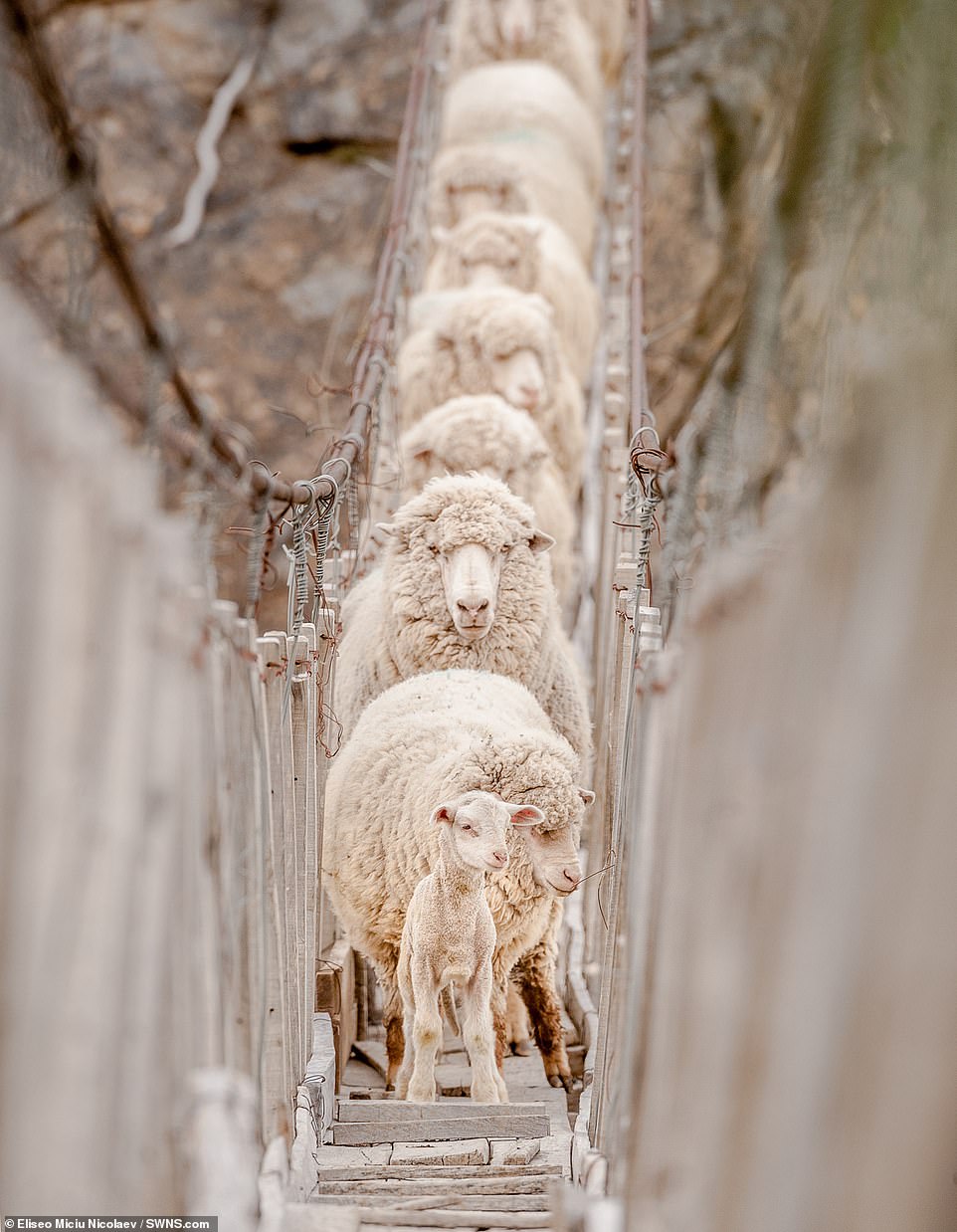 Runner up: A sweet photo of a little lamb crossing a rickety wooden bridge, followed by a herd of more than nine sheep in Patagonia, Argentina 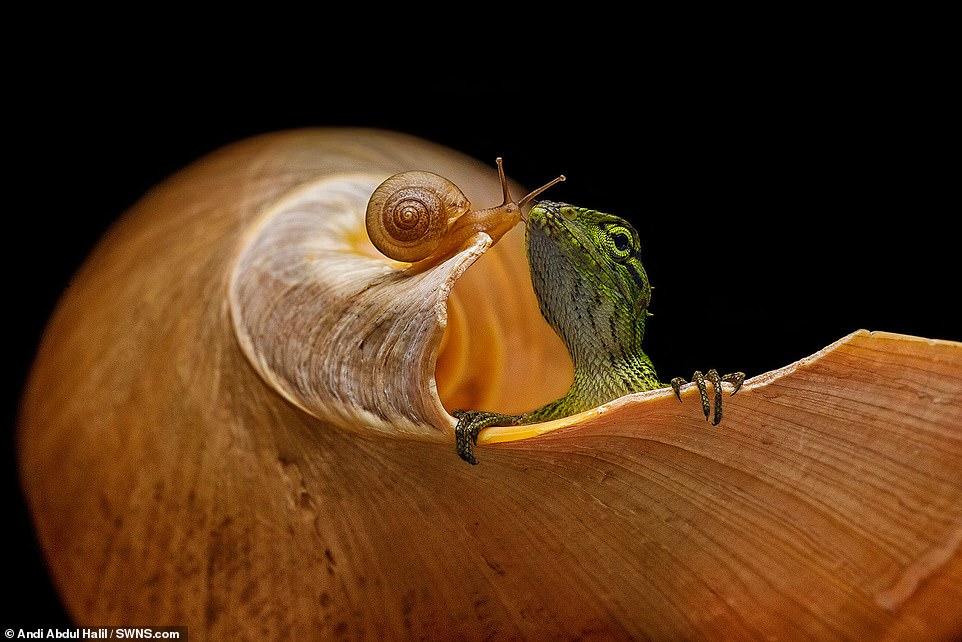 Runner up: This amazing photo shows a lizard clambering on what appears to be an empty shell sharing a ‘kiss’ with a tiny snail in Indonesia 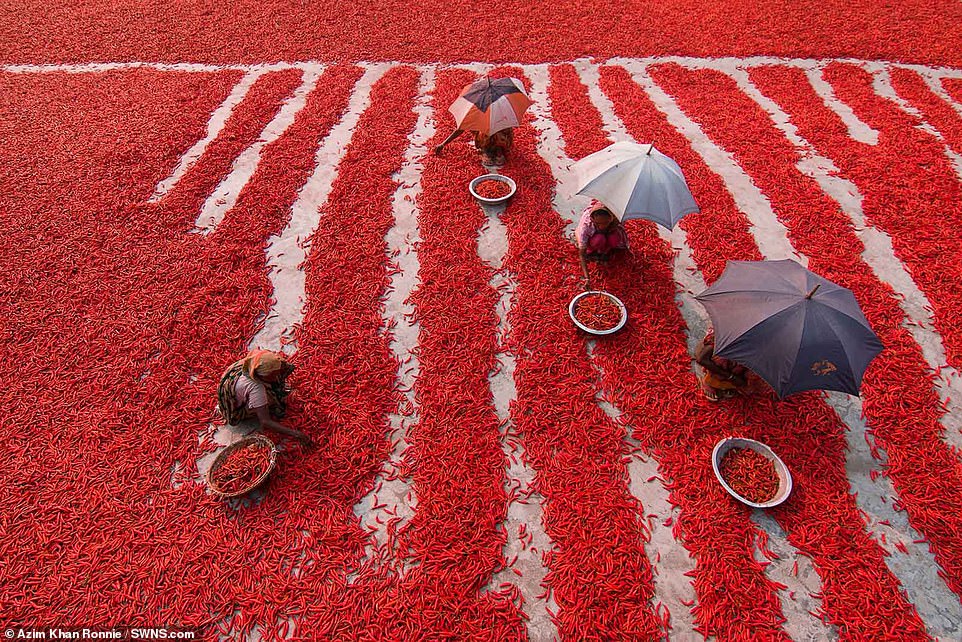 Runner up: Countless chilli peppers surround labourers in the Bogra district in the north of Bangladesh. More than 2,000 people work in almost 100 chilli farms in Bogra in Bangladesh to supply local spice companies with chillies for use in their recipes

Tags: at, images, just, Stunning, taken
You may also like
Celebrities News