The cost of seating diners on car parking spaces in Melbourne’s trendy inner-north has caused a street fight about who should pay when COVID-19 restrictions lift next year.

City of Yarra councillors will be forced to reconsider their decision to charge bars and cafes up to $5000 per year to use a parking space for diners from next October. The new fee structure was voted on earlier this week, and was to be implemented progressively from April, but independent councillor Stephen Jolly filed a motion for a review on Thursday following criticism, including from the state government. 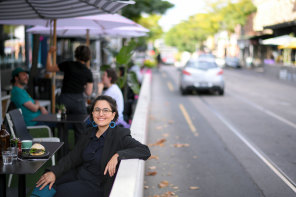 Yarra mayor Gabrielle de Vietri at the Archie’s café parklet on Gertrude Street in May this year.Credit:Eddie Jim

Melbourne diners will return to on-street parklets from about October 26, according to Victoria’s road map, once 70 per cent of people aged over 16 are fully vaccinated.

The fees for a permanent parklet program were first announced earlier this year, before the latest lockdowns. Greens on the Yarra council on Tuesday agreed to waive the charges until April, then bring them back, with a temporary discount.

By October next year, traders on major shopping strips, such as Smith and Brunswick streets, would pay $5000 a year for each parking space. The majority of parklets are on smaller streets, where traders would be charged $2250 a year per parking space from next October.

Small Business Minister Jaala Pulford lashed out at Greens mayor Gabrielle de Vietri for planning to charge “exorbitant” fees in the municipality, which falls in the state Labor seat of Richmond, where Planning Minister Richard Wynne is under threat from the Greens. 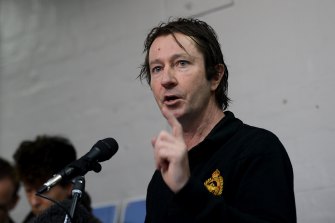 Independent councillor Stephen Jolly stepped in on Thursday, circulating a motion to review the fees and seek investment from the state government.

“Why kick down, when [the council] should be kicking up?” said Cr Jolly, whose motion will be debated on October 19.

“I would be happy to arrange a time to discuss what further support the state government might provide councils to enable us to subsidise outdoor dining into the future,” she wrote.

In a statement, Ms Pulford said the state government, which had already put $87.5 million towards outdoor dining over the last year, would make further announcements soon.

Stonnington, which does not have ticketed on-street parking, has waived costs so far, but otherwise set fees between $300 and $600 for six months.

The City of Melbourne will progressively roll out a fee structure from next April. Each parking space in the inner-city would cost traders $1800 in the first year, but that expense would grow to $7200 by 2023-24. Outside the city, such as Lygon Street, traders would be charged $414 initially, and then $1659 per parking bay.

Cr de Vietri said Yarra would start breaking even once the full fees were introduced from late next year, but that the fees were “the bare minimum” charge sustainable for the council.

The council would review the fees if tough capacity restrictions continued past April, she indicated.

The mayor said on-street dining was an exciting use of parking spaces, but private businesses needed to pay to profit from public land once COVID-19 restrictions lifted, particularly when some other businesses did not benefit.

Peter “PK” Kaylor, who has advocated for traders and residents as the People of Gertrude Street, said it would have been unreasonable if fees in Yarra were introduced immediately, but added “$5000 a year for a car parking space in inner-city represents value”, and traders would appreciate certainty.

“By April 2022, you’d hope that things are starting to rebound by then,” he said.

In council consultations earlier this year, 60 per cent of businesses with a parklet told Yarra City Council they would be willing to spend more than $500 a month to keep them permanently.

But Katie Marron, of Smith Street eatery Miss Katie’s Crab Shack, questioned the consultations. She said small businesses, such as hers, still faced an uncertain year and would have to catch up on deferred rent and debts when they finally started trading again.

She said the tiered system was overly simplistic and would benefit large venues with greater capacity and a higher turnover.

“I understand we need to pay for the use of public space, I’m not disagreeing with that whatsoever. My issue is this tiered system,” Ms Marron said.

She invested $10,000 on infrastructure and furniture for her parklet, which takes up two parking spaces, meaning it would cost $10,000 a year to Yarra from next October.

Although Yarra lost more than $606,000 in parking revenue, Ms Marron pointed out that was based on pre-COVID levels.

All four independent councillors – Cr Jolly, Claudia Nguyen, Herschel Landes and Bridgid O’Brien – opposed the fee structure that was supported by the Greens councillors on Tuesday.

Cr Jolly said the fees should be lower for struggling businesses and to ensure job security for the hospitality workers they employed.

Cr Landes said Smith and Brunswick streets were comparable to Lygon Street and should be charged accordingly, saying the council had “jumped the gun” and caused confusion in lockdown.

Tags: ‘parklet’, fe, fight, over, Street
You may also like
Celebrities News