London: Church of England bishops have apologised to LGBTQI+ people for the rejection and hostility they have faced, but the Archbishop of Canterbury Justin Welby acknowledging the religious body was still “very divided” on the subject.

The apology comes days after the church set out proposals developed by the bishops that showed it would refuse to allow same-sex couples to get married in its churches, while saying priests could bless them. 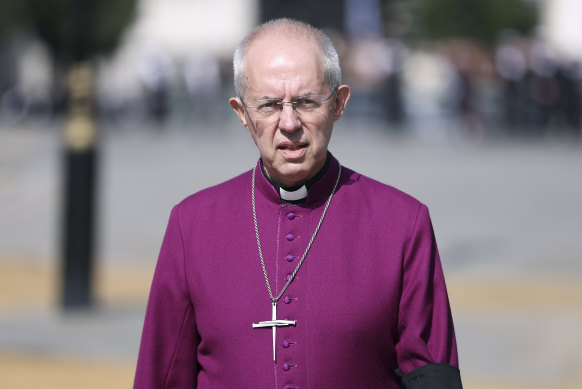 The Archbishop of Canterbury Justin Welby.Credit:AP

“We have not loved you as God loves you, and that is profoundly wrong,” the bishops said in an open letter. “We affirm, publicly and unequivocally, that LGBTQI+ people are welcome and valued: we are all children of God.

“The occasions on which you have received a hostile and homophobic response in our churches are shameful and for this we repent.”

The Church of England, central to one of the world’s oldest Christian institutions, the Anglican communion, stood by its teaching that marriage is between “one man and one woman” in the proposals. Gay marriage is legal in Britain. 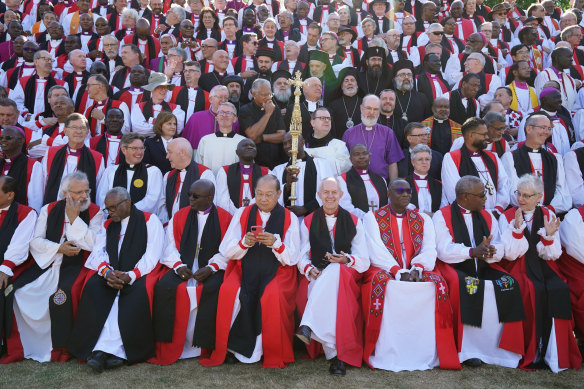 Archbishop of Canterbury Justin Welby, front row, centre right, with bishops from around the world last year. The decision to not allow same-sex marriage follows five years of debate within the Church of England.Credit:AP

“We’re divided, there’s no point in pretending otherwise. The Church of England and the Anglican Communion are very divided,” Welby told reporters, ahead of a meeting of the synod next month when the proposals will be deliberated further.

“I’m sure that discussions will continue. But this is an enormously important point, not only within the Anglican Communion and the Church of England, but also across the global church,” he added.

“It’s a long journey. I’m sure that the last word hasn’t been said.”

A spokesperson for gay and transgender lobby group Stonewall said the church had “once again” fallen short in being inclusive and supportive of LGBTQ+ Christians.

“An apology only goes so far when so many LGBTQ+ Christians have faced hostility and discrimination for who they are,” the spokesperson said.

The most high-profile support from a religious leader for same-sex couples to get married in churches in Britain has come from the Bishop of Oxford, Steven Croft, who apologised in November for having been slow to change his views.

On Friday, Croft said: “It is very good for us to be able to say today that the church can now offer public services of blessing, but we know that we have further to go.”

Croft’s call for change has been backed publicly only by a few of his fellow bishops, who along with clergy and laity form the church’s governing body, known as the General Synod.