Washington: Stanford University cancelled in-person classes for the final two weeks of the academic quarter amid rising concern about the coronavirus outbreak.

As the coronavirus first reported in China spreads in the United States, several schools have taken this step as a precaution, hoping to avoid further infections on campus. 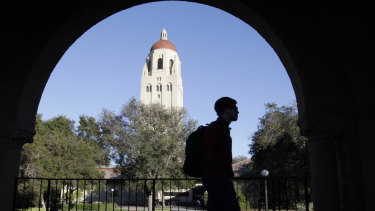 The University of Washington, which has more than 55,000 students on three campuses, announced on Friday that it would switch to virtual classes, and some smaller schools in the hard-hit Seattle area announced similar plans.

Stanford, with its prestigious international reputation, will be closely watched as other university leaders grapple with how best to fight the outbreak.

The campus remains open, with health and other services available, and research continues, according to a message to students from a university official, but students are not required to be there. 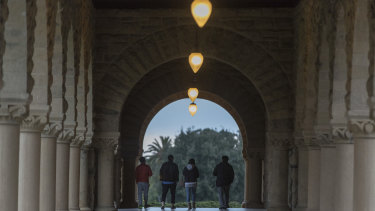 Students walk along the campus of California’s Stanford University, which has made attendance in person optional.Credit:New York Times

It's jarring to make these changes at the end of the quarter, as finals approach, said Courtney Douglas, a senior who was driving home to San Diego on Sunday with friends. She had packed up clothing and books the night before, and students choosing to leave campus were essentially saying goodbye, unsure of when or whether they would return, she said.

Their worries about finishing coursework remotely and being able to graduate to start jobs, she added, are tempered by their understanding of the broader context of a global epidemic.

"People are losing their lives to this."

Some students and others have worried that the campus in California was an increasingly unsafe place to be as COVID-19 infections, the disease caused by the coronavirus, were reported nearby. An online petition calling for Stanford leaders to take action to prevent the spread of the virus on campus garnered more than 3700 digital signatures.

Another petition urged the university to "protect, inform, and fairly compensate workers" during the outbreak, because of the increased vulnerability of food service workers and custodians in particular.

The university's president announced on Thursday that Stanford Medicine was caring for a few patients with COVID-19. The Stanford Daily reported that a faculty member in the Stanford school of medicine had tested positive for the infection, citing an email from a dean to students. A university spokesman did not immediately respond to a request for comment Sunday.

Provost Persis Drell told the campus that starting on Monday, for the last two weeks of the winter quarter, classes at Stanford will no longer meet in person and, as much as possible, they will be taught online.

Exams will be administered as take-home tests rather than being given in a classroom setting. Drell acknowledged that the sudden change would be a challenge for instructors and said the university is committed to helping them make the transition.

Susie Brubaker-Cole, Stanford's vice provost for student affairs, wrote in an email to students that if they were planning to leave campus now or closer to spring break, "please keep in mind that the COVID-19 situation is rapidly evolving, and this will likely continue for the foreseeable future. Travel will continue to be uncertain, and a range of factors may make it difficult for you to travel back."

She advised them to pack more heavily than they normally would, with travel delays in mind.

Stanford also announced that the university would not host admitted students on campus for the annual weekend welcoming them this year, typically a large and important event and one that had been planned for late April.

That added to the uncertainty for students about when normal life on campus might resume, Douglas said. "The future of the academic year is unclear."