Spain orders hotels to shut by next Thursday and starts converting them into hospitals, leaving British tourists in chaos with flights cut back

Spain has ordered its hotels to shut by next Thursday, throwing British tourists into uncertainty with flights heavily reduced.

Hotels and other ‘short-stay accommodation’ are being shut down in Spain’s latest draconian step to halt the spread of the virus.

Spanish authorities have already begun converting hotels into makeshift hospitals as they battle an outbreak which has killed 833 people in the country and infected 18,077 patients.

The hotels will have to close by next Thursday, although the measure does not apply to long-term accommodation where guests can cater for themselves – as long as they can obey quarantine rules.

The UK Foreign Office had appeared to confirm such a move earlier this week, but an earlier warning that hotels would shut by Tuesday is no longer on the FCO website.

The FCO now advises that Britons who want to return to the UK should ‘make travel plans as soon as possible’, although flights have been cut back because of the outbreak.

According to the UK government, Spanish authorities ‘have underlined that no-one will be left without accommodation’, suggesting some tourists could be moved to other hotels. 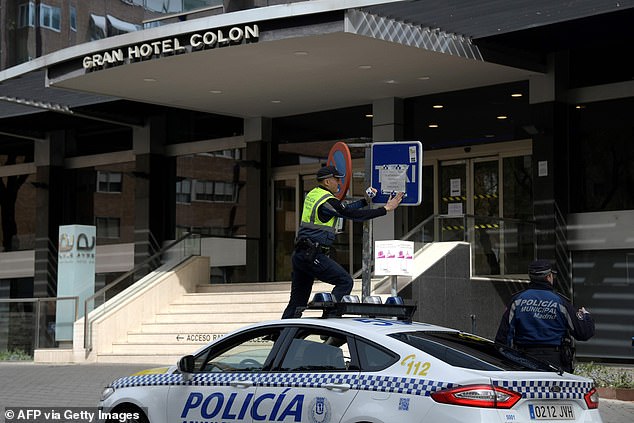 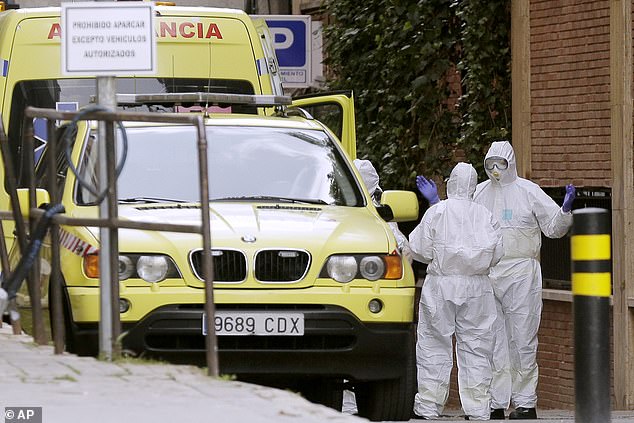 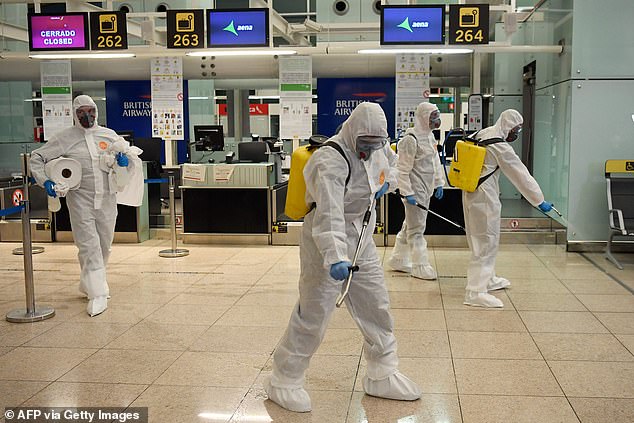 Spain’s new measure orders ‘the suspension of opening to the public of all hotels and similar lodgings, tourist accommodation and other short-term accommodation… situated on national territory,’ the official notice reads.

Spain is the world’s second-most popular tourist destination, after France, and the tourist industry is key to its economy.

But Spain has imposed a national lockdown to halt the virus. More than 1,000 troops have been deployed in 14 cities across the country to help police the lockdown, telling people to go home unless they have a good reason to be outside.

Some hotels are already being turned into makeshift hospitals, including the 359-room Gran Hotel Colon in Madrid, and Spain hopes to acquire more hotel rooms for medical treatment.

Hotels in Madrid have offered 60,000 beds to the health service, authorities said.

Britons made nearly 19million visits to Spain last year, and many British expats live in the country, meaning many holiday plans are likely to be ruined by the outbreak.

EasyJet has cancelled its regular flights to Spain until at least March 29, saying it will run rescue flights to take people home.

‘For customers who have their flight cancelled, we are committed to getting you home,’ the airline says.

Some British Airways flights between the UK and Spain are still scheduled to operate. BA says it is ‘still operating flights to allow Spanish residents to return home, as well as repatriating UK residents currently in Spain.

Ryanair has heavily reduced flights, but says it is trying to get people home. 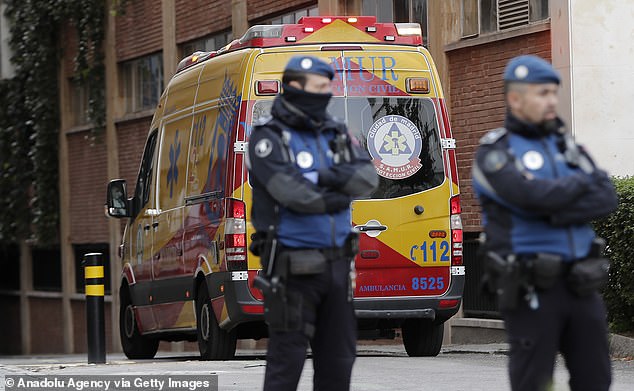 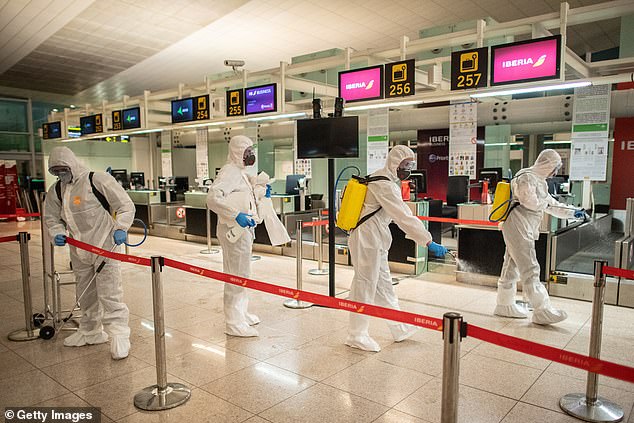 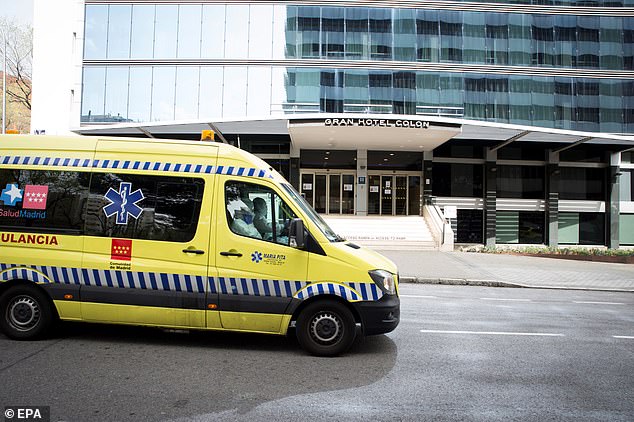 Foreign secretary Dominic Raab says there are between 300,000 and ‘closer to a million’ British nationals travelling abroad.

‘That is a massive, massive scale,’ he admitted.

Mr Raab told a Commons committee that the government was asking airlines to operate flights on routes they did not normally serve, which ‘takes some configuring’.

He said any spare seats on rescue flights would be offered to other countries trying to bring their citizens home.

Long-stay accommodation in Spain can remain open, providing they have the necessary infrastructure for residents to obey the country’s confinement rules.

However, they will not be allowed to accept new guests until the state of emergency is over, Spanish media says.

Foreign Office advice currently reads: ‘British travellers who are currently in Spain and who wish to return to the UK are advised to make travel plans to do so as soon as possible.

‘If you’re currently on holiday in Spain, check with your tour operator or accommodation provider for further information.

‘If you’re travelling and wish to return to the UK, contact your tour operator, checking the website of their airlines or ferry companies for further advice.

‘The Spanish authorities may ask British travellers to move hotels before 24 March and have underlined that no-one will be left without accommodation.’ 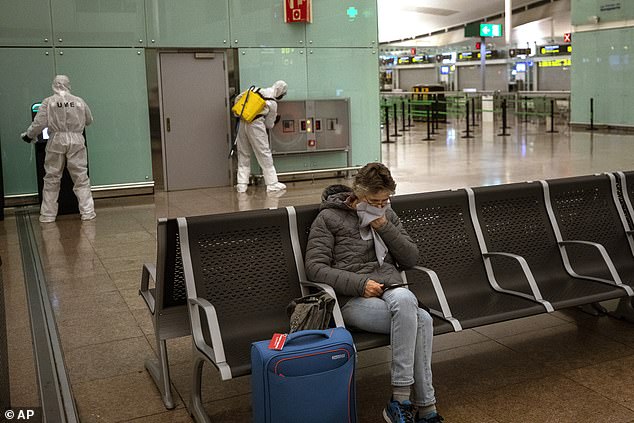 A woman covers her mouth in an airport terminal near Barcelona this morning, with health workers carrying out disinfection work behind her 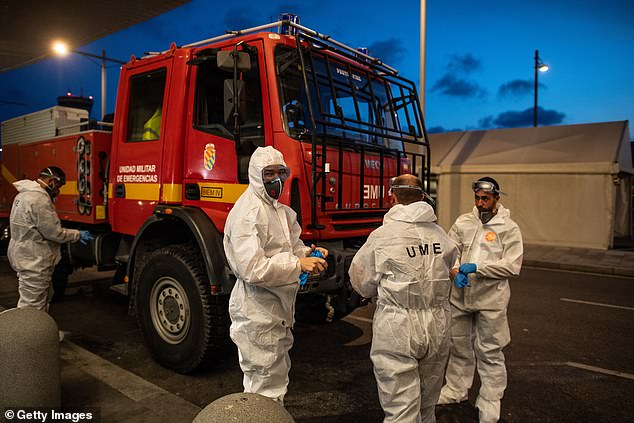 British and German tourists made nearly 100million overnight stays in 2019, representing 44 per cent of the total.

The Spanish government has declared a state of alert, shutting all but essential services and ordering its population of 46 million people to stay at home.

People are only allowed to go out to buy food or medicine, to go to work or to get medical treatment.

Fines for breaching the rules can be up to 30,000 euros (£27,200) and a public address system is reinforcing the message in Spanish, Catalan, English and German.

The number of infections could well be higher, because Spain – like many other countries – has been struggling with a shortage of testing kits.

It is only the second such declaration since the country returned to democracy following the death of dictator Francisco Franco in 1975.

The other time was during a 2010 air traffic controllers’ strike.

The Foreign Office is now advising against all but essential international travel, including to Spain, because of the coronavirus outbreak.

Tags: by, hotels, orders, shut, Spain, to
You may also like
Celebrities News