The balance between individual freedoms and the interests of the wider community has repeatedly been tested during the COVID-19 pandemic and the front line is shifting to the small business community.

The NSW government last week announced that as a condition for reopening, it will require businesses to refuse entry to unvaccinated customers and Victoria’s road map will likely follow a similar path. 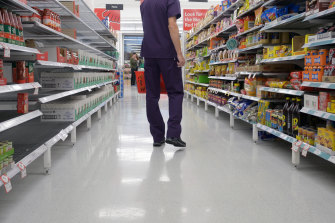 Small business will be a big winner from a vaccinated nation.Credit:Bloomberg

But there are increasing complaints from store owners about what they say is an infringement of their civil liberties and rule changes that could make them enforcers of public health orders.

Pubs, beauty salons and retailers are using social media platforms to express their concern and to spruik for unvaccinated customers. Some are opposed to vaccination itself; others to the idea that they will have to turn customers away at the door if they cannot produce a vaccine passport.

One store proclaims: “My store and my staff will not take part in discriminating against people for any reason.”

Many businesses might be concerned that they will permanently antagonise those customers who irrationally believe that vaccines are ineffective or dangerous.

The rate at which Australians are being vaccinated indicates most are keen to get their jabs and see their nation reopened, as already achieved in many countries overseas. Of course there are pockets of rejection, most noisily voiced by the likes of controversial federal MP Craig Kelly, but broadly there are encouraging signs that Australia’s anti-vaccination movement is weaker than in the US or Europe.

In Victoria, 66.2 percent have already had the first of two doses. In NSW, where the federal government has directed a higher proportion of doses up until this point, 78 per cent of people over the age of 16 have had their first dose. With the federal government announcing another million doses of the Moderna vaccine on Sunday, those numbers should improve.

Mandating that vaccinations are required in retail and other settings will antagonise some libertarians, but offer an additional incentive to get the jab. It will allow stores to reopen sooner by reducing the risk of a pandemic of the unvaccinated.

Such a move would also complement the federal government’s $50 million advertising campaign titled “First Things First” which focuses on the freedom to go out once vaccination rates are high.

While a store owner might claim it is their choice whether to let in an unvaccinated customer, the costs will be borne by the already overburdened public hospital system.

For these reasons, vaccine mandates have been deployed not just in countries such as France where strong anti-vaxx movements had stalled their vaccination drives but also in Singapore, which has one of the highest vaccination rates in the world.

Governments should be using the coming weeks to prepare businesses for their important role in post-lockdown Victoria. Businesses should also be trained in how to handle hostile unvaccinated customers who demand to be let inside. Store owners should not have to act as security guards.

Some of the opposition might be diffused by a clear but very limited system of exemptions, such as for people who suffer from underlying health conditions or who for some reason have not been able to access a vaccine. Consideration could be given to offering rapid tests as an alternative to vaccination passports.

Small businesses will be the great winners if we can end lockdowns and open up safely and quickly. But they also face a testing time implementing the new rules.

Tags: Businesses, must, small, Support
You may also like
Celebrities News