As his allies pleaded for help, the president watched the crisis on TV.

And Kellyanne Conway, a longtime Trump confidante and former White House senior adviser, called an aide who she knew was standing at the President's side. 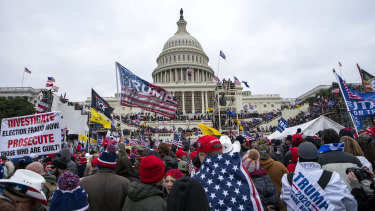 Supporters of President Donald Trump rally at the US Capitol last week.Credit:AP

But as senators and House members trapped inside the US Capitol on Wednesday begged for immediate help during the siege, they struggled to get through to the President, who – safely ensconced in the West Wing – was too busy watching fiery TV images of the crisis unfolding around them to act or even bother to hear their cries for help.

"It took him a while to appreciate the gravity of the situation," Graham said in an interview.

"He was hard to reach, and you know why? Because it was live TV," said one close Trump adviser. "If it's TiVo, he just hits pause and takes the calls. If it's live TV, he watches it, and he was just watching it all unfold."

Even as he did so, Trump did not move to act. And the message from those around him – that he needed to call off the angry mob he had egged on just hours earlier, or lives could be lost – was one to which he was not initially receptive. 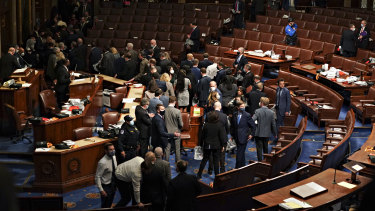 Members of Congress being evacuated from the House Chamber after Trump supporters breached the Capitol.Credit:Bloomberg

Press officials had begun discussing a statement from Trump around 2pm, when protesters first breached the Capitol, an official familiar with the discussions said. But they were not authorised to speak on behalf of the President and could only take the matter to chief-of-staff Mark Meadows, this person said, adding that "the most infuriating part" of the day was how long it took before Trump finally spoke out.

Around the same time, Trump jnr headed to the airport for a shuttle flight home to New York. As he waited in an airport lounge to board the plane, the President's namesake son saw that the rally-goers they had all urged to fight were doing just that, breaching police barricades and laying siege to the Capitol.

An aide called Trump jnr and suggested he immediately issue a statement urging the rioters to stop. At 2.17pm, Trump jnr hit send on a tweet as he boarded the plane: "This is wrong and not who we are," he wrote. "Be peaceful and use your 1st Amendment rights, but don't start acting like the other side. We have a country to save and this doesn't help anyone."

But the President himself was busy enjoying the spectacle. Trump watched with interest, buoyed to see that his supporters were fighting so hard on his behalf, one close adviser said.

But if Trump didn't appear to understand the magnitude of the crisis, those in his orbit did. Conway immediately called a close personal aide who she knew was with the President, and said she was adding her name to the chorus of people urging Trump to speak to his supporters. He needed to tell them to stand down and leave the Capitol, she told the aide.

Conway also told the aide that she had received calls from the DC mayor's office asking for help in getting Trump to call up the National Guard.

Ivanka Trump had gone to the Oval Office as soon as the riot became clear, and Graham reached her on her cellphone and implored her for help. "They were all trying to get him to speak out, to tell everyone to leave," said Graham, referring to the small group of aides with Trump on Wednesday afternoon.

Several Republican members of Congress also called White House aides, begging them to get Trump's attention and have him call for the violence to end. The lawmakers reiterated that they had been loyal Trump supporters and were even willing to vote against the electoral college results – but were now scared for their lives, officials said.

When the mob first breached the Capitol, coming within mere seconds of entering the Senate chamber, Pence – who was overseeing the electoral certification – was hustled away to a secure location, where he remained for the duration of the siege, despite multiple suggestions from his Secret Service detail that he leave the Capitol, said an official familiar with Pence's actions that day.

Instead, the Vice-President fielded calls from congressional leaders furious that the National Guard had not yet been deployed, this official said. Pence, from his secret location in the Capitol, spoke with legislative and military leaders, working to mobilise the soldiers and offering reassurance. 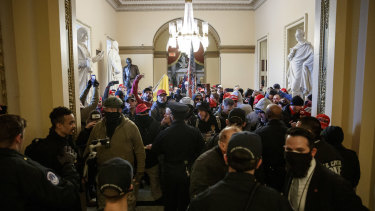 Members of the US Capitol Police trying to block demonstrators from reaching the House Floor.Credit:Bloomberg

Even as his supporters at the Capitol chanted for Pence to be hanged, Trump never called the Vice-President to check on him or his family. Marc Short, Pence's chief-of-staff, eventually called the White House to let them know that Pence and his team were OK, after receiving no outreach from the President or anyone else in the White House.

Meanwhile, in the West Wing, a small group of aides – including Ivanka Trump, White House press secretary Kayleigh McEnany and Meadows – was imploring Trump to speak out against the violence. Meadows's staff had prompted him to go see the President, with one aide telling the chief of staff before he entered the Oval Office, "They are going to kill people."

Shortly after 2.30pm, the group finally persuaded Trump to send a tweet: "Please support our Capitol Police and Law Enforcement," he wrote. "They are truly on the side of our Country. Stay peaceful!"

But the Twitter missive was insufficient, and Trump had not wanted to include the final instruction to "stay peaceful," according to one person familiar with the discussions.

Less than an hour later, aides persuaded Trump to send a second, slightly more forceful tweet: "I am asking for everyone at the US Capitol to remain peaceful," he wrote. "No violence! Remember, WE are the Party of Law & Order – respect the Law and our great men and women in Blue. Thank you!" 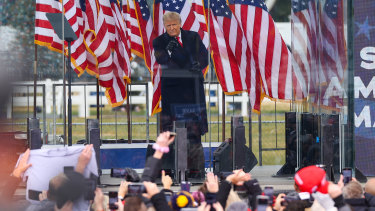 US President Donald Trump speaks at the “Save America March” rally before the Capitol was stormed by his supporters.Credit:Getty Images

McCarthy did eventually reach Trump, but later told allies that he found the President distracted. So McCarthy repeatedly appeared on television to describe the mayhem, an adviser said, in an effort to explain just how dire the situation was and to secure the President's attention.

McCarthy also called Kushner, who that afternoon was arriving back from a trip to the Middle East. The Secret Service originally warned Kushner that it was unsafe to venture downtown to the White House. McCarthy pleaded with him to persuade Trump to issue a statement for his supporters to leave the Capitol, saying he'd had no luck during his own conversation with Trump, the adviser said. So Kushner headed to the White House.

At one point, Trump worried that the unruly group was frightening GOP lawmakers from doing his bidding and objecting to the election results, an official said.

National security adviser Robert O'Brien also began calling members of Congress to ask how he could help. He called Senator Mike Lee, around 4pm, a Lee spokesman said. In an unlikely twist, Lee had heard from the President earlier – when he accidentally dialed the senator in a bid to reach Senator Tommy Tuberville, to discuss overturning the election.

Others were still having trouble getting through to the White House. Speaking on ABC News shortly before 4pm Wednesday, Chris Christie, a GOP former governor of New Jersey, said he'd spent the last 25 minutes trying to reach Trump directly to convey a simple, if urgent, message.

"The President caused this protest to occur; he's the only one who can make it stop," Christie said. "The President has to come out and tell his supporters to leave the Capitol grounds and to allow the Congress to do their business peacefully. And anything short of that is an abdication of his responsibility."

Around this time, the White House was preparing to put out a video address on behalf of the President. They had begun discussing this option earlier but struggled to organise their effort. Biden, meanwhile, stepped forward with remarks that seemed to rise to the occasion: "The scenes of chaos at the Capitol do not reflect the true America, do not represent who we are."

Trump aides did three takes of the video and chose the most palatable option, despite some West Wing consternation that the President had called the violent protesters "very special."

"This was a fraudulent election, but we can't play into the hands of these people," Trump said in the video, released shortly after 4pm "We have to have peace. So go home. We love you. You're very special. You've seen what happens. You see the way others are treated that are so bad and so evil. I know how you feel. But go home, and go home in peace."

Amid the chaos, DC Democratic Mayor Muriel Bowser had implemented a 6pm curfew for the city, and as darkness fell, Secret Service told West Wing staff that, save for an essential few, everyone had to leave the White House and go home.

At 6.01pm, Trump blasted out yet another tweet, which Twitter quickly deleted and which many in his orbit were particularly furious about, fearing he was further inflaming the still-tense situation.

"These are the things and events that happen when a sacred landslide election victory is so unceremoniously & viciously stripped away from great patriots who have been badly & unfairly treated for so long," Trump wrote. "Go home with love & in peace. Remember this day forever!"

Thirteen minutes later, at 6.14pm, a perimeter was finally established around the Capitol. At about 8pm, more than six hours after the initial breach, the Capitol was declared secure.

The following evening, on Thursday, Trump released another video, the closest advisers say he is likely to come to a concession speech.

"Congress has certified the results: A new administration will be inaugurated on January 20th," Trump said in the video. "My focus now turns to ensuring a smooth, orderly, and seamless transition of power. This moment calls for healing and reconciliation."

His calls for healing and reconciliation were more than a day too late, many aides said. Yet as Trump watched the media coverage of his video, he grew angry.

The President said he wished he hadn't done it, a senior White House official said, because he feared that the calming words made him look weak.

Tags: hours, Inside, of, paralysis:, Six
You may also like
Celebrities News