When Indonesia’s President Joko Widodo sat down and received the country’s first shot of a COVID-19 vaccine on live television in January, it marked the beginning of a monumental task.

Having endured the largest outbreak in south-east Asia – the death toll edged past 40,000 last week with total recorded infections at nearly 1.5 million – the world’s fourth most populous nation has been in the grip of the virus to such an extent that new graveyards have had to be built in the capital Jakarta as cemeteries ran out of room. 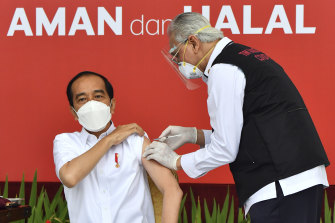 To achieve herd immunity, the government of Jokowi, as the president is known, has set out to inoculate 181 million of its 270 million people by next March, a lofty goal further complicated by sheer geography in a vast archipelago in which 6000 islands are inhabited.

There is no handbook for such an assignment but, for better or worse, Indonesia is writing its own.

First, there was the controversial strategy of prioritising the 18-59 age bracket – a category Jokowi, who isn’t 60 until June, snuck into himself – over the elderly. That was abandoned last month when the government brought forward the start of its over-60s vaccinations, citing their higher fatality rate.

Another ploy was having social media influencers among the first given the needle in an effort to assuage doubts about the safety of vaccines and, in the world’s largest Muslim majority nation, whether they would be forbidden under Islamic law. 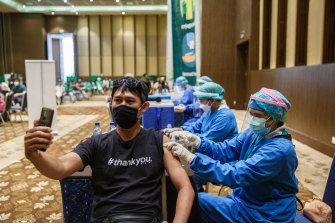 A healthcare worker is injected with the vaccine in Bali.Credit:Bloomberg

Next month, another distinctive and contentious tranche of Indonesia’s vaccine game plan is due to take shape.

In a corporate scheme to run parallel to the general vaccination program, private companies will be able to buy doses themselves and distribute them to employees and their families for free.

Called Gotong Royong, which means mutual assistance, it is being sold as a key pillar of Indonesia’s COVID-19 road map, conceived amid Jokowi’s determination to accelerate Indonesia’s escape from the pandemic. 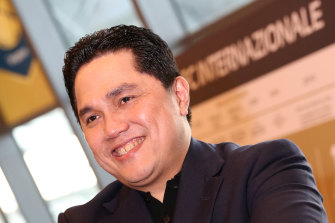 “Every country is facing this pandemic differently. Each country is trying to find a way by their own,” Erick Thohir, Indonesia’s Minister for State-Owned Enterprises, which is overseeing the program, told The Sydney Morning Herald and The Age.

“We are a big country in terms of population, with many islands. I’ve just come back from Ambon, which itself has 2000 islands – 700 occupied. To transport some of the vaccine to these islands, it’s challenging.”

According to its proponents, the corporate scheme will simultaneously help productivity and ease the burden on the government, which has found getting access to enough of the vaccine a challenge as it injects 500,000 doses a day.

Opponents, however, say it promotes inequality, giving special treatment to the wealthy and prosperous who are able to buy their way to the front of the queue, and leaves open the possibility of the supply of vaccines being commercialised inside the country and them ending up on the black market. 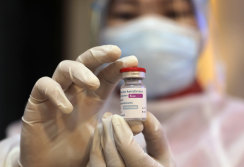 A health worker shows a vial of the AstraZeneca COVID-19 vaccine in Surabaya, East Java.Credit:AP

Already, 16,500 companies have signed up for the program, covering 8.5 million employees and their families, according to the influential Indonesian Chamber of Commerce and Industry, which hopes the vaccinations themselves will start in April.

Business chamber chairman Rosan Roeslani, who personally lobbied Jokowi to adopt the proposal, said most of Indonesia’s major conglomerates and multinationals were involved. He believes the final number of people vaccinated by privately purchased doses will reach 20 million.

The vaccines themselves, to be assigned by the state-owned pharmaceutical firm PT Bio Farma, can’t be drawn from the same pile being used for the general public.

That includes Sinovac’s CoronaVac – 3 million people had received both doses of it by Saturday – and AstraZeneca, which Indonesia has now started rolling out, as well Novavax and Pfizer-BioNTech, which the country has orders in for.

The private sector plans to instead use China’s Sinopharm for its employees and their family members as well as potentially Russia’s Sputnik and American vaccines Moderna and Johnson & Johnson.

Companies were willing to accept a price of up to $60 per dose, Roeslani said. Their identities haven’t been released but in one example of private purchasing in practice, PT Freeport Indonesia says it is importing 70,000 doses from China for its employees working at Grasberg in West Papua, the world’s largest gold mine and third-largest copper mine.

The mining giant said the vaccines were also for employees’ families but that Freeport would purchase more to vaccinate the people of Tembagapura, the town where the mine is located.

While it’s been designed to help speed up the vaccination process, the idea of letting companies buy masses of vaccines is not without its sceptics.

Irma Handayani, the co-founder of LaporCOVID-19, a non-government organisation established to monitor Indonesia’s response to the virus, said the government was putting economic and political issues ahead of the needs of the most vulnerable.

“This program basically provides the feeling of inequality and unfairness because it breaks vaccination’s rule of the game that vulnerable people must get vaccinated first,” Handayani said.

She said it would also be susceptible to corruption, revealing that an investigation by LaporCOVID-19 had found several companies in Surabaya, the capital of East Java province, had charged employees for COVID-19 tests and cut their daily allowance when they were in self-isolation.

Pandu Riono, an epidemiologist at the University of Indonesia’s Faculty of Public Health, is another who strongly disagrees with companies being allowed to buy vaccines and who has been a vocal critic of the country’s response to COVID-19 over the past year.

He was particularly scathing of the government originally indicating it would overlook the older population in the initial stages of the free rollout by placing the 18-59 age group, along with health workers and civil servants, at the front of the line.

Riono said the soon-to-begin private program was an “exclusive concept”.

“It only helps the employees and their families of this or that company,” Riono said.

“If the private sector wishes to help the government, they should contribute in the terms of providing facilities at hospitals or helping with cold chain facilities or funds. From the philosophical point of view, the private scheme is very selfish.” Thohir, the minister responsible for the corporate scheme, dismisses concerns about it being open to manipulation, saying it had the backing of corruption watchdog KPK, and the companies’ data on who was to receive the jabs would be closely scrutinised.

“We don’t want to have an issue like you see in some other countries with a black market,” he said.

As for claims of unfairness, they are also strongly disputed.

“They say ‘you buy this for the rich people’. No, [the companies] will give it free to all of our employees and families,” said Roeslani, the business chamber chair.

“I like to see it as active participation from the private sector trying to help the government. Even though this is a challenging time for everybody, we need to work together to get a better result.”

Tags: how, Indon, or, selfish, sensible?
You may also like
Celebrities News