Scotland’s Covid cases TRIPLED in a fortnight after return of schoolchildren while outbreak in England levelled off days before classrooms reopened to pupils, official data reveals

Scotland’s Covid cases tripled in a fortnight after schools returned from the summer holidays, official figures suggested today — as the outbreak in England plateaued days before classrooms opened.

The Office for National Statistics weekly report estimated 117,300 Scots, or one in 45 people, were infected with the virus on any given day in the week to September 3.

This was more than 200 per cent above infections two weeks ago when 36,700 Scots had the virus, or one in 140, and marked the first time the country’s weekly figures have surged into six-figures since the pandemic began.

In England, however, infections remained level after the ONS estimated there were 754,600 people infected with the virus, or one in 70, barely a change from the previous week.

Both Northern Ireland and Wales — where schools return at the same time as England — saw their infections rise by 10 per cent and 66 per cent in a week, respectively. Northern Ireland was estimated to have the highest Covid infection rate in the UK, with one in 40 people having the virus.

The mounting infection rates north of the border come as Professor Chris Whitty and the chief medical officers from the devolved nations prepare to clear the way for vaccinating 12 to 15-year-olds.

England’s chief medical officer, who was asked by No10 to make the final decision on jabbing youngsters, is next week expected to sign off on expanding the roll-out to include all over-12s, it was claimed today. It could see secondary school children given jabs from the week commencing September 20.

Advisers told him that the jabs could boost the mental health of youngsters and stop them taking time off school, The Times claims. 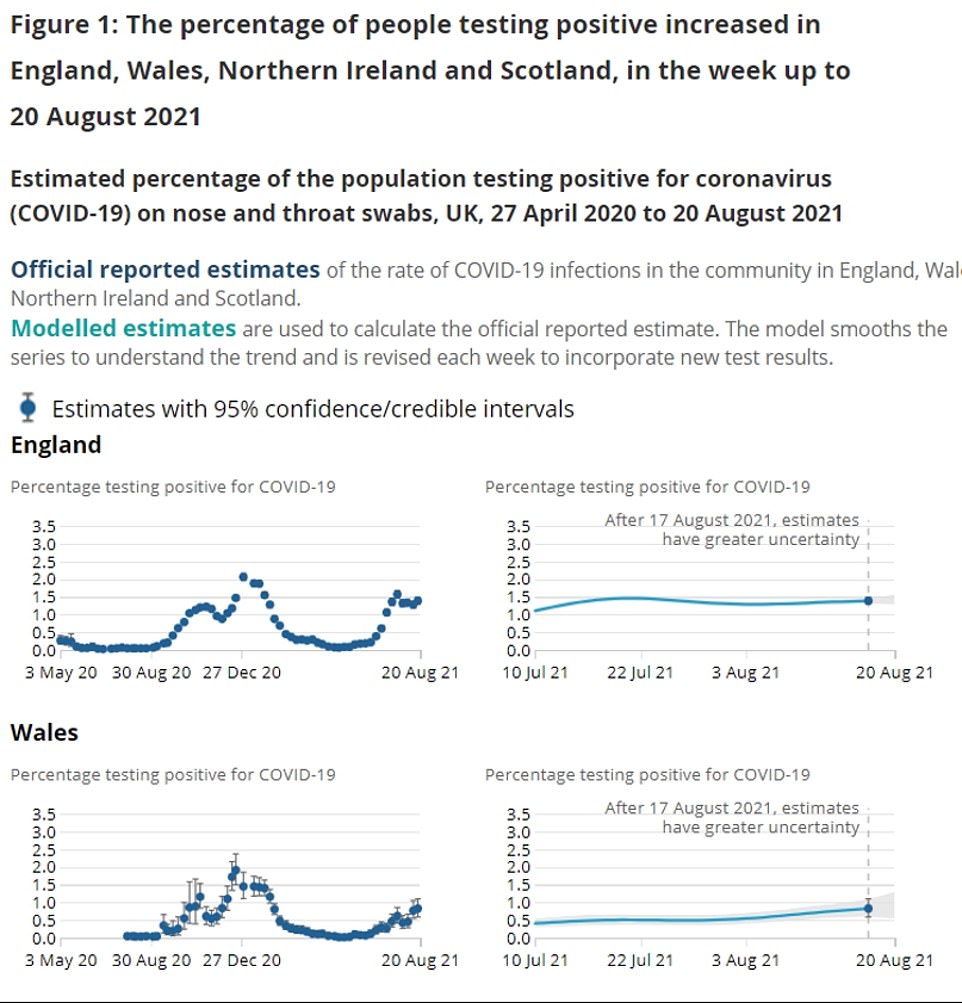 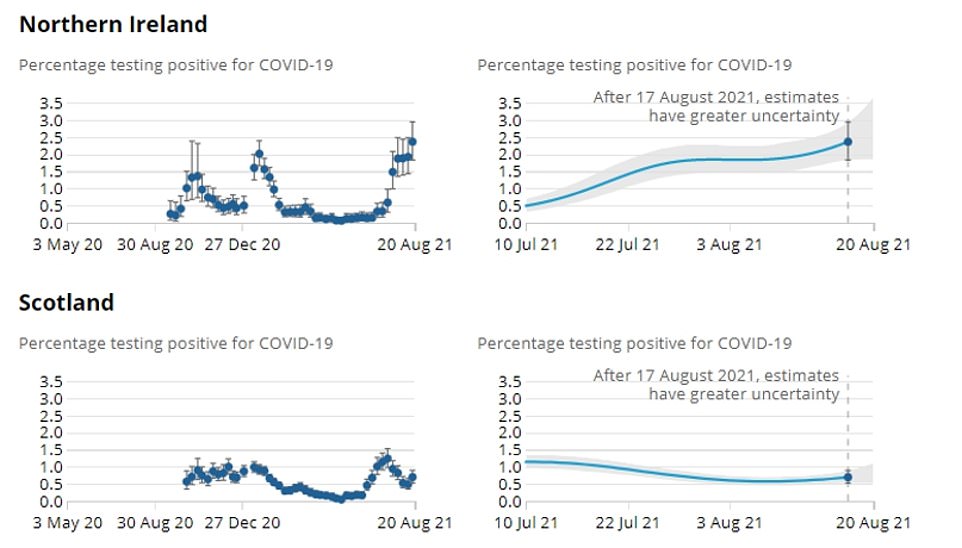 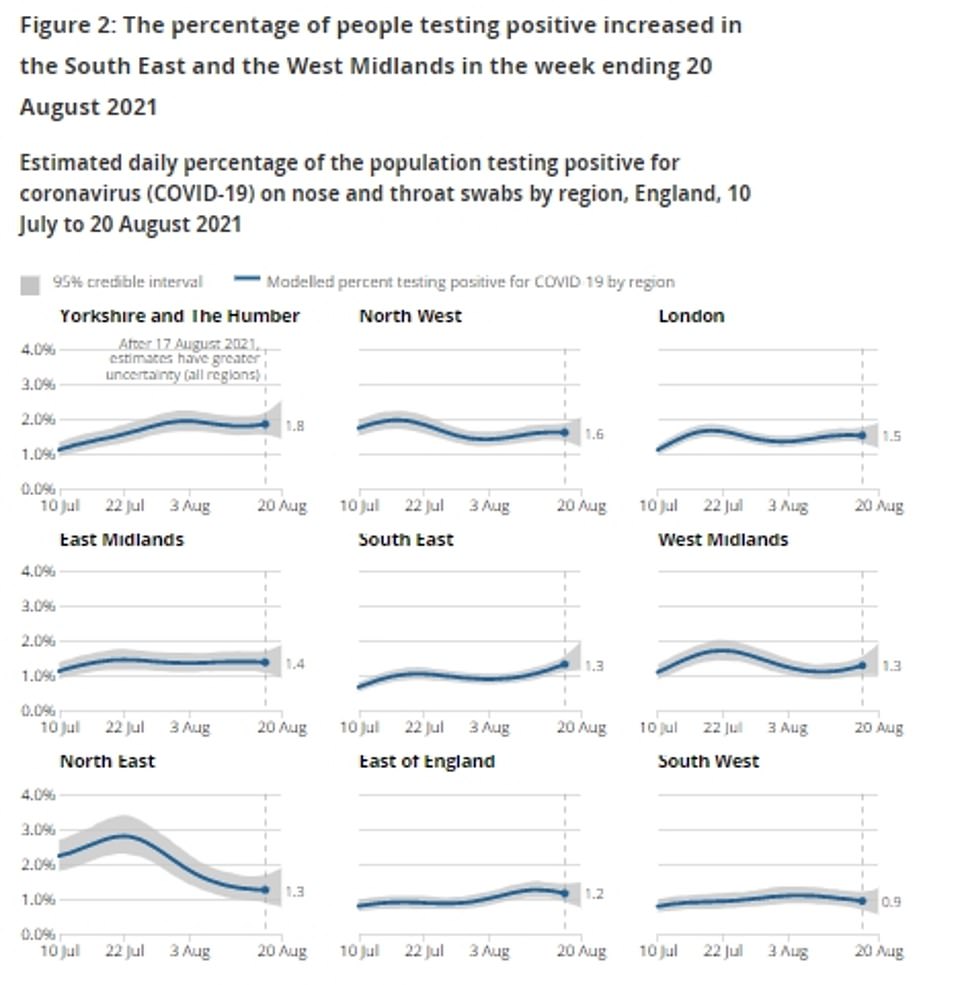 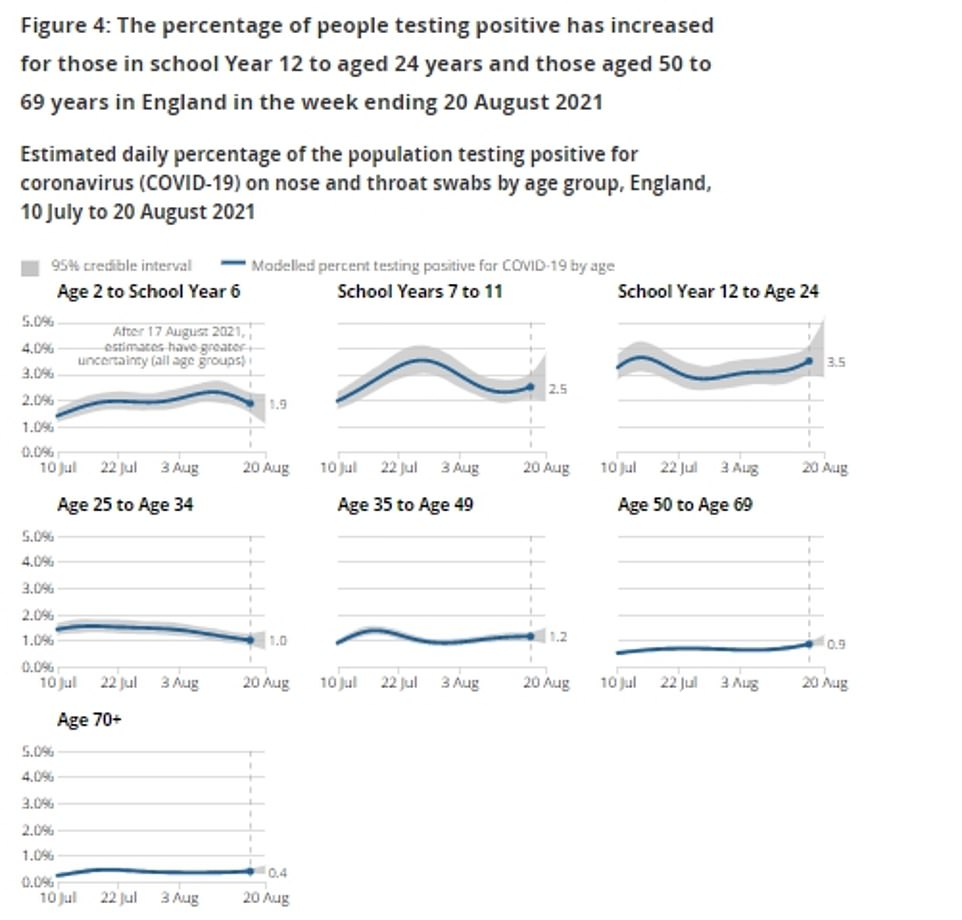 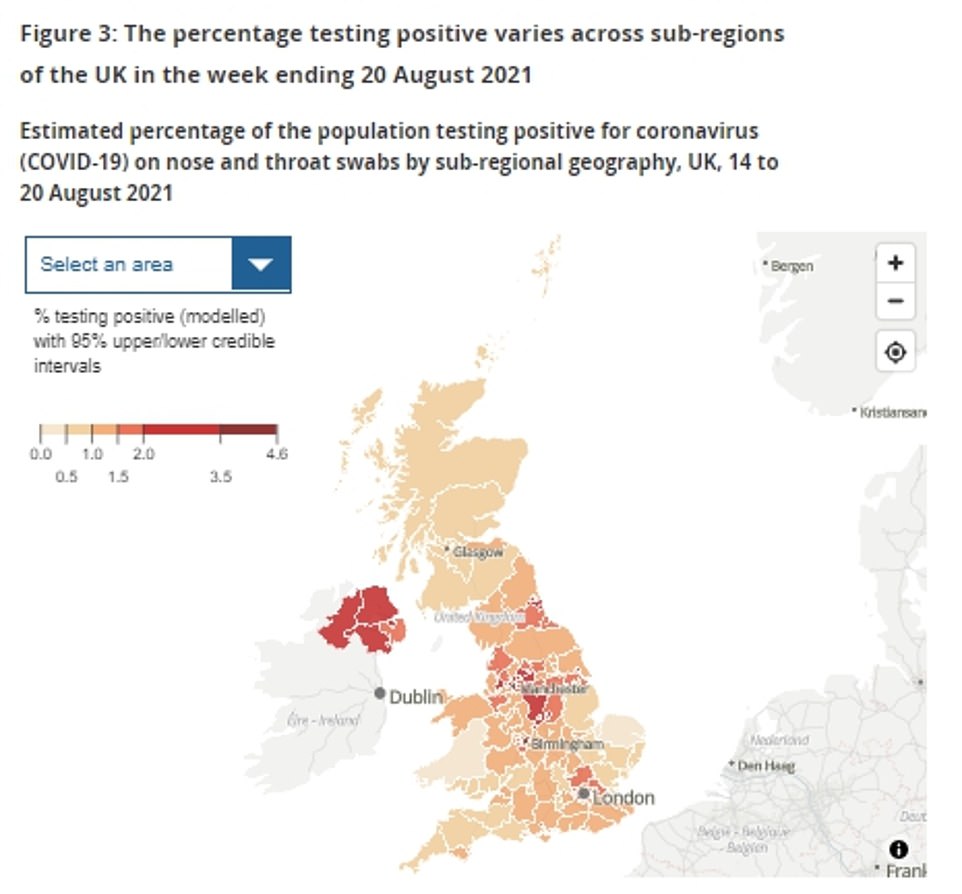 The trend for all other regions is uncertain.

North-east England had the highest proportion of people of any region likely to test positive for coronavirus in the week to September 3: around one in 45.

Britain’s booster Covid vaccine drive is set to finally get the go ahead next week when No10’s advisory panel signs off on a ‘mix and match’ approach to top-up doses, it was claimed today.

Millions of elderly Britons are expected to receive a top-up jab this autumn after data showed a third dose cause a ‘several-fold increase’ in antibodies, which help fight off the coronavirus.

And Government insiders say the third dose people receive will likely be of a different type to their first two doses because the combination will offer better protection.

But one of the leading figures in the development of the AstraZeneca jab today said a mass coronavirus vaccine booster campaign like that of Israel and the US may not be necessary.

Dame Sarah Gilbert said immunity is ‘lasting well’ for most people and suggested extra doses should be directed to countries with a low rate of vaccination.

She told The Daily Telegraph: ‘We will look at each situation; the immuno-compromised and elderly will receive boosters. But I don’t think we need to boost everybody.’

Health Secretary Sajid Javid yesterday said he expects a booster programme to start later in September but he is still awaiting advice from experts on the scale of any campaign to offer extra shots to people.

Eastern England had the lowest estimate: around one in 90.

When modelling the level of Covid-19 infections among different age ranges in England, the ONS said rates have increased for those aged from two to school Year 11, and for those aged 35 to 49.

The percentage testing positive decreased for those aged 25 to 34 and 50 to 69, while the trend is uncertain for all other age groups.

Around one in 35 people from school Years 7 to 11 and from school Year 12 to age 24 are estimated to have had Covid-19 in the week to September 3 – the highest positivity rate for any age group.

The Government’s own vaccine advisory panel, the Joint Committee on Vaccination and Immunisation (JCVI), last week ruled that the benefits of vaccines were only ‘marginally greater’ than the known risks for 12 to 15-year-olds.

Both Pfizer and Moderna’s jabs have been linked to a rare heart complication called myocarditis in young adults and children.

Following the JCVI ruling, ministers asked Professor Whitty and the UK’s other chief medical officers in Scotland, Wales and Northern Ireland to carry out a wider review to weigh up the societal benefits of inoculating children, to see whether this would tip the balance clearly in favour of jabbing the group.

The full details of this review are yet to be published although they are set to be formally announced next week when the chief medical officers present their decision on vaccinating children.

SAGE members have suggested giving the youngest children just one dose of the jab because it offers ‘high levels of protection’ and carries less risk of myocarditis, inflammation of the heart heavily linked to the second vaccine.

One expert on the panel told the i newspaper: ‘With both the Moderna and Pfizer vaccines offering high levels of protection after just one dose this is one course of action being considered.’

Concerns over vaccinating children have centered around the complication, which appears to be mild but can strike up to one in 15,000 teenage boys after their second dose.

A University of California study yesterday revealed boys are six times more likely to suffer the side effect after two doses of the vaccine than be hospitalised if they catch the virus.

But they found their risk of experiencing the rare side effect after one dose was so low that it made hospitalisation with the disease more than twice as likely.

British teenagers aged 16 and 17 have been able to get one dose of the Covid vaccine since last month, when the JCVI approved the expansion of the roll-out. Scientists are still yet to decide whether they should also be offered a second dose of the jab because of the myocarditis risk.

Parents will also be asked for consent to inoculate their children once the jabs receive the green light, with forms set to be posted within days of the announcement.