A just-certified California sailing enthusiast rescued a woman who was about to drown after she was swept out to sea and stranded naked in 66-degree water for 12 hours when he spotted her hand while observing a pod of dolphins.

On September 26, Khosrow ‘Koz’ Khosravani, 60, and a group of friends planned to sail from Marina Del Rey to Paradise Cove in Malibu on his boat, the SV Defiant.

On their trip, Khosravani, a former lecturer at UCLA in information technology, spotted a pod of dolphins and decided to go off route to get closer to the mammals.

However, that’s when he noticed something unusual.

‘I saw a hand,’ he said. ‘If it wasn’t for the dolphins, I would have never seen this lady, who only had a few minutes to live.’ 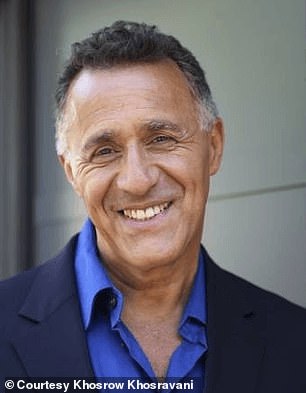 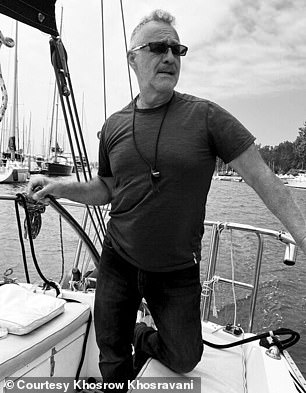 After 12 hours stuck at sea off the coast of Marina Del Rey, an unidentified woman was saved last month by sailor Khosrow Khosravani (left and right) who happened to spot her hand while marveling at a pod of dolphins

At the start of the trip, Khosravani, who had become a certified sailor weeks earlier after taking courses through the American Sailing Association, taught everyone on board what to do in case of an emergency.

‘I told them these things will never happen but it’s good to know,’ he told KTLA. ‘Well, 30 minutes later, they needed all the training.’

After coming close to the unidentified woman, Khosravani threw out a floatation device but then realized she was too weak to use it. So he tossed her a buoy with a 70-foot cord.

Five minutes later, after a second attempt, he managed to get the young woman to come close to the side of the boat before pulling her aboard. Khosravani said she was naked, exhausted and could barely speak.

He wrapped the barely conscious and freezing woman in a blanket.

‘I asked her if she is alone or if there are other people we should look for,’ Khosravani recounts. ‘She could barely say her first name and she said she’s alone.’ 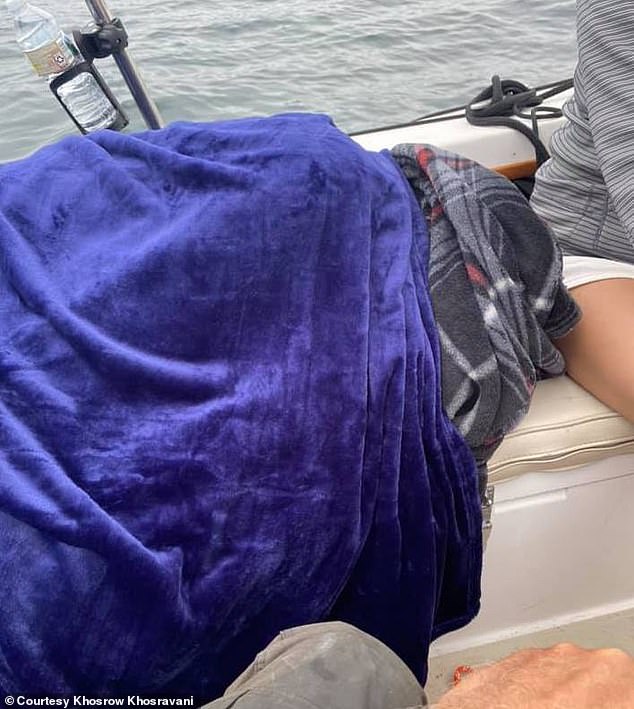 The unidentified woman was wrapped up in blankets and towels on the boat while awaiting lifeguard rescue. It is told that she almost died from severe hypothermia after going for a late night swim on the night of September 25th

Matthew Rhodes, who is a rescue boat captain for LACoFD Ocean Lifeguard Division, was part of the rescue mission after receiving a mayday transmission. The U.S. Coast Guard relayed that the SV Defiant ‘picked up a person out of the water about three miles off Paradise Cove.’

‘It was pretty gloomy conditions,’ Rhodes later said of the situation, adding that the water in the Pacific Ocean was 66 degrees that day. ‘We went out as quickly as we could. We transferred a 26-year-old female from their sailing vessel to our rescue boat.’

Officials said the woman had gone for a late night swim alone when she was pulled two and a half miles away from shore.

At the time of her rescue, she was suffering from severe hypothermia and was described as having a gray skin tone due to her condition.

She told her rescuers that she survived by floating on her back for 12 hours.

‘Her vital signs were abnormal. She was weak and had a slow heart rate,’ Rhodes said. ‘She had poor circulation from being so cold. She looked very exhausted.’ 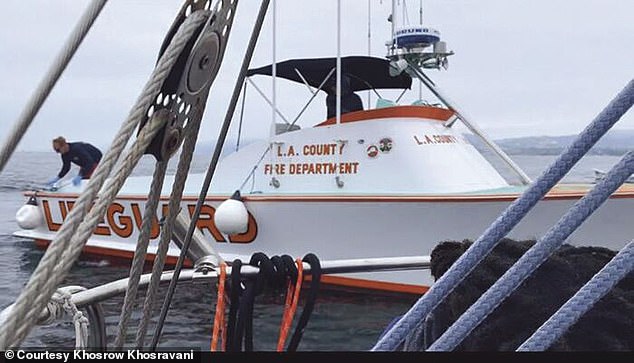 LA County Fire Department lifeguards respond to Khosrow Khosravani mayday call to rescue the female swimmer, thought to have been in the water for 12 hours.

The woman also described how she became disoriented as the nighttime current swept her adrift.

Khosravani was just glad him and his crewmates found her before it was too late.

‘There is something in this universe, it just wasn’t her time,’ Khosravani said.

‘I consider myself maybe spiritual rather than religious. But the things that happened one after another, if all wouldn’t have aligned together, this lady wouldn’t be with us today.’

The woman was released from the hospital after three days of being treated for hypothermia at UCLA’s Ronald Reagan Hospital, officials said.

Khosravani said he hasn’t been in contact with the her but will reach out when she’s ready.

Dailmaily.com has reached out to both the Los Angeles County Fire Department and  Khosravani for comment.

Tags: rescued, s, sailor, was, who, woman
You may also like
Celebrities News