High-income countries must donate a billion coronavirus vaccines to the rest of the world before new virus variants develop, potentially rendering them less effective, the World Health Organisation has warned.

In a report published on Wednesday night, the WHO called on wealthier nations to give the doses to 92 low and middle-income countries by September 1, reaching two billion by mid-2022. 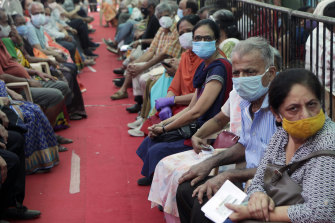 People wait to receive COVID-19 vaccine in Mumbai, India, on April 29. Several states have reported running out of vaccine doses.Credit:AP

“The more quickly we vaccinate now, the less likelihood there is of ever more variants emerging,” it said, adding it was “deeply concerned and alarmed” by continued high levels of transmission worldwide.

There have been roughly one billion COVID-19 vaccine doses administered worldwide. However, the bulk of these have been in high-income countries, including 263 million in the US.

The report found that, while some high-income countries had deals securing enough doses to vaccinate their populations twice over, in many low-income countries fewer than one in 100 people had received a single dose of vaccine.

In addition to its deals with pharmaceutical companies, including Pfizer and AstraZeneca, Australia is among more than 190 countries that have paid to be part of the COVAX Facility, a WHO initiative designed to distribute coronavirus vaccines equitably across the world.

However, the program only distributed about 50 million of its two billion doses promised this year.

The report said the two billion doses should be provided through other mechanisms as well as the COVAX Facility, which it said was “making good progress” but had been hampered by “a lack of sufficient funds and by vaccine nationalism, and now, vaccine diplomacy”.

As nearly 160 million COVID-19 cases have been detected across the world, new variants of the virus have emerged.

While larger trial results for the AstraZeneca vaccine are still to be seen, an early, smaller trial found it offered little protection against this variant.

The WHO warned new variants will continue to develop for as long as the virus circulates. In India, where daily cases have reached more than 400,000, the more recent B1.617 variant has become widespread.

“The more the virus spreads, the more likely there will be newer variants,” said Professor Mike Toole, an epidemiologist at the Burnet Institute.

“The virus mutates randomly, and it mutates more slowly than a lot of other viruses: about twice a month. 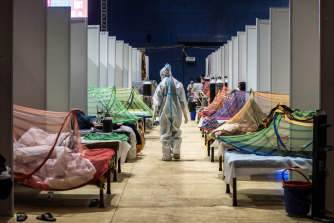 A medical worker in PPE observes patients who have been infected by COVID-19 inside a makeshift facility in a New Delhi sports stadium.Credit:Getty

“Most of those mutations die out, but some of them don’t and are a problem.”

Other immediate recommendations made by the WHO in the report, titled Make It the Last Pandemic, included measures to make vaccines easier to produce in poorer nations.

It recommended the World Trade Organisation and the WHO convene vaccine-producing countries and manufacturers to determine voluntary licensing and technology transfer agreements for the vaccines.

If this does not occur within three months, it called for an immediate waiver of intellectual property rights over the vaccines.

US President Joe Biden has voiced support for waiving intellectual property protections for COVID-19 vaccines, a push which has been led at the WTO by India and South Africa, although faced European opposition.

Professor Toole said he believed licensing agreements, such as the arrangement between Melbourne-based CSL and AstraZeneca and Novavax’s deal with the Serum Institute of India, were more useful than patent waivers.

“These mRNA vaccines are very complicated to manufacture and the patent doesn’t necessarily contain detailed instructions,” he said, adding that companies such as Pfizer and Moderna should consider the “very good” manufacturing facilities in Thailand and Indonesia for partnerships.

The WHO also called for G7 and G20 nations to provide $19 billion in funding for its Access to COVID-19 Tools Accelerator (ACT-A) partnership to strengthen global health systems.

Australia cut its foreign aid budget in Tuesday’s federal budget by $144 million to $4.335 billion for 2021-22, including $355 million to be spent on rolling out vaccines in the Pacific and South-East Asia.

Get our Coronavirus Update newsletter

Stay across the news you need to know related to the pandemic. Get it every Monday.

Tags: A, b, countries, donate, must, Rich
You may also like
Celebrities News