Families locked out of Victoria by the state's sudden border closure say they feel like “refugees in our own country” and have told of continued confused messaging and incorrect advice from the government as they desperately try to return home from NSW.

Premier Daniel Andrews on Thursday confirmed he made the controversial decision on News Year's Day to slam shut the border with eight hours' notice and apologised for the inconvenience felt by those left stranded. 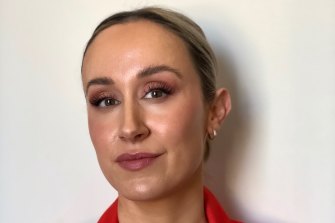 Brooke Holmes, from Chelsea in Melbourne’s south-east, has been stuck in northern NSW with her family since the Victorian border closed.

Mr Andrews said he believed those affected by the border closure had been treated fairly, but acknowledged many of them might disagree.

Chelsea woman Brooke Holmes said she and her husband were stranded in northern NSW with no income, a daughter about to start year 11, and they had been unable to get through on the Health Department hotline.

A number of other people who contacted The Age said they had called the hotline multiple times and were given conflicting advice each time, and complained that staff who answered the hotline did not know how the rules applied to their individual case.

More than 4000 Victorians and their dependants have applied for exemptions to allow them to cross the border and the Premier said he hoped to announce within days more pathways for stranded residents to return home, with just 400 exemptions granted so far allowing travellers to return.

The state government says it has drafted in hundreds more staff to process exemption applications and was keeping in touch with applicants but the state opposition demanded more be done to bring residents home.

The Premier used his first press conference of the year to intensify his push for heightened precautions at Australia's entry points against the growing threat from a mutated strain of COVID-19 that has forced Britain back into lockdown.

Mr Andrews said he would go to Friday’s hastily convened meeting of national cabinet hoping to convince other premiers and the Prime Minister to isolate all arriving international flight crew, test hotel quarantine workers every day and to insist on swabs for all inbound passengers before they boarded their planes for Australia.

Victoria recorded no new coronavirus cases on Thursday, after conducting more than 32,700 tests, while residents of three Brisbane suburbs were urged to get tested after a worker in Queensland’s hotel quarantine program tested positive to the virus.

Victoria’s mystery case, which may have been acquired at either the Boxing Day sales at Chadstone shopping centre or the Test match cricket at the MCG, has been genomically linked to Sydney’s northern beaches cluster, although no chain of transmission has been established.

The discovery came as authorities released a further alert over the mystery case, asking people who visited Zara in Chadstone between 6am and 1.30pm on December 26 to get tested immediately and isolate.

Chadstone retailer Superdry, whose store at the shopping centre was visited by the man on Boxing Day, said on Thursday that it had not been contacted by the Department of Health and Human Services since an alert was issued on Wednesday that thousands of shoppers were potentially exposed to the virus.

Victoria's COVID-19 response commander, Jeroen Weimar, said phone data of the man in his 30s from Vermont South who returned a positive test on Wednesday was used to identify information around his journey through the popular south-eastern suburbs shopping centre.

The Premier said he hoped “to make some announcements" on the status of the Victoria-NSW border next week, depending on developments in NSW.

“We'll do everything we can to get you home as soon as possible but I cannot have a situation where there is a pathway home for you, and you bring the virus with you,” Mr Andrews said.

"We apologise and acknowledge the inconvenience, but that inconvenience is nothing compared to a third wave, because that will be so hard for every single Victorian.

“We need to do everything we can do to stop that.”

Ms Holmes told of her family's failed attempt to get home from Ballina in northern NSW, where they were holidaying with relatives, in the hours before Victoria’s border shut.

Ms Holmes said both she and her husband were self employed and earning no income while stranded, and were desperate to come back to Victoria to reunite with their two dogs, and to ensure their daughter can start year 1l.

“We didn’t budget for this and it’s a massive disadvantage financially,” she said. “We’re basically refugees in our own country. We can’t even set foot into our own state.”

Opposition frontbencher David Southwick accused the Andrews government of turning its back on Victorians in NSW.

Tags: 'Refugees, Country, in, our, own
You may also like
Celebrities News

17 royal engagement rings that will blow you away: Meghan Markle, Princess Eugenie, Princess Diana and more