A SHOW-OFF uni student has been slammed for ‘recklessly’ chugging two entire liters of Jack Daniels in just 18 SECONDS.

After the shocking drinking video of Jaleb Gann, 19, went viral, he praised himself for an “impressive world record feat”. 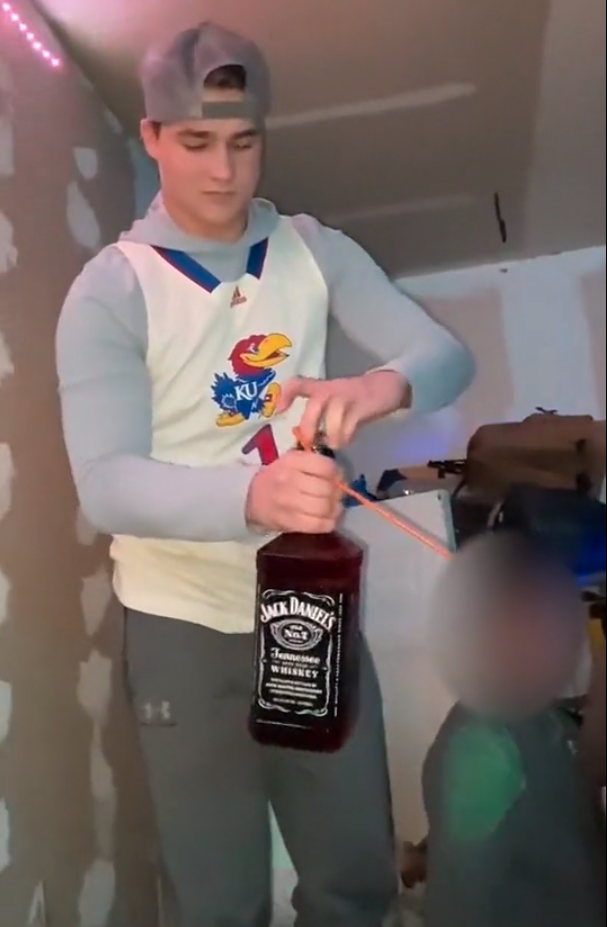 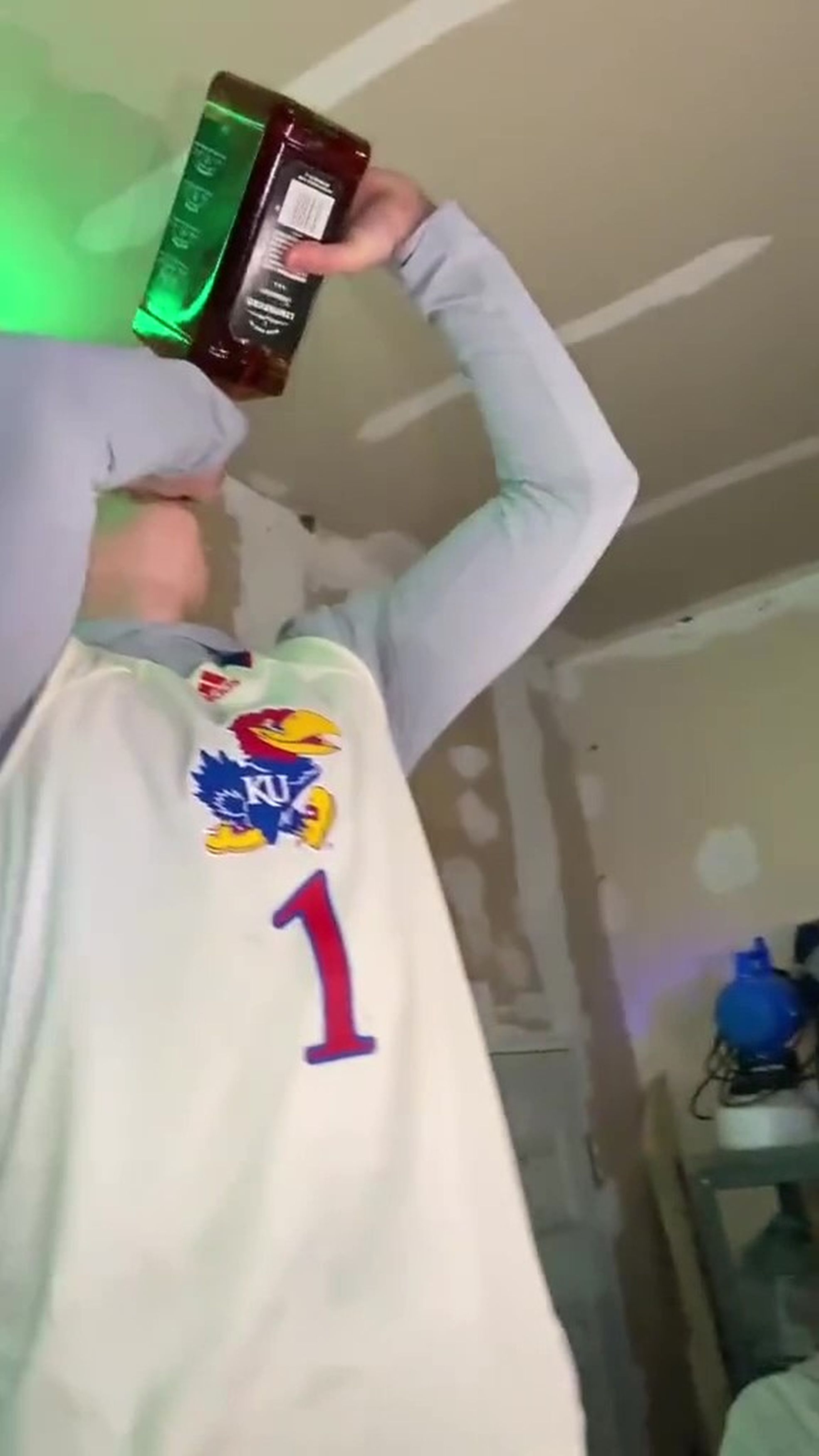 In the alarming footage, Gann can be seen standing on a table at a party last Thursday wearing a University of Kansas shirt.

The teen is holding a 1.75-liter bottle of the 40 per cent whiskey in his right hand.

Despite a girl in the crowd pleading "don't do it Jaleb", the cocky biology student removes the bottle's seal and cap before sliding an orange straw into the 70 units of alcohol.

Immediately Jaleb throws his head back and starts chugging while there is a mixture of cheers and groans from the crowd.

He finishes the last drop within 18 seconds – and looks very pale afterwards.

His drinking prompted much concern on Twitter, with several fearing for the health of his liver after guzzling so much alcohol in one go.

Shawn Blair tweeted: "Great way to get alcohol poisoning and slip [into] a coma."

Bill Stanton added: "The kid has a death wish."

And Nathan Gully sounded a word of caution, tweeting: "Bro, ain't worth it – my dad had a buddy in college that died from chugging like this. Not trying to be a Karen, but looking out."

Gann replied: "I appreciate ya man, we good tho."

Nicole Carranza warned: "RIP to your kidneys and liver; wish I had working kidneys but not to do this with them lol.

"Don't ever take health for granted."

Gann responded: "God bless you and I play you find a donor." 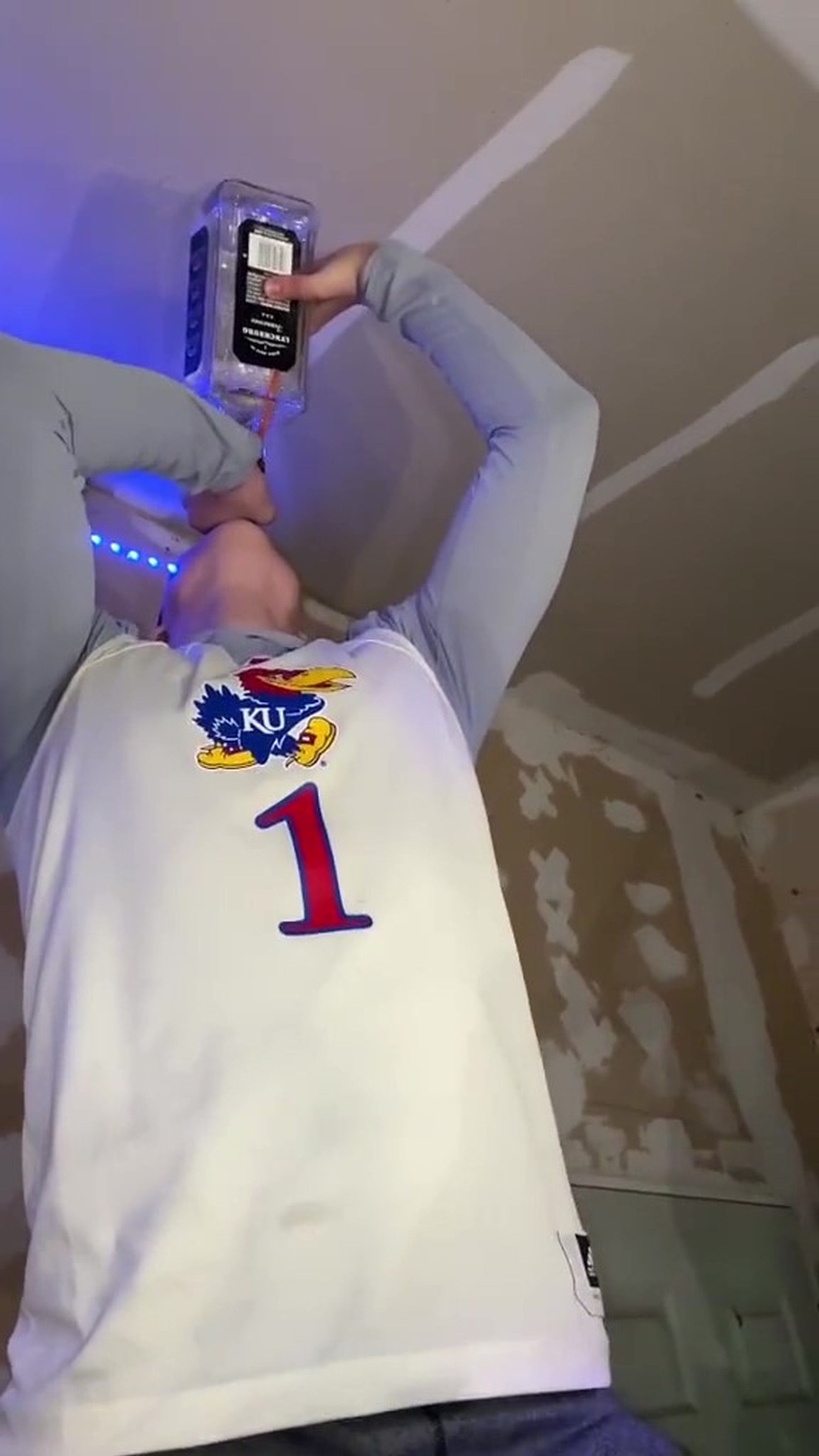 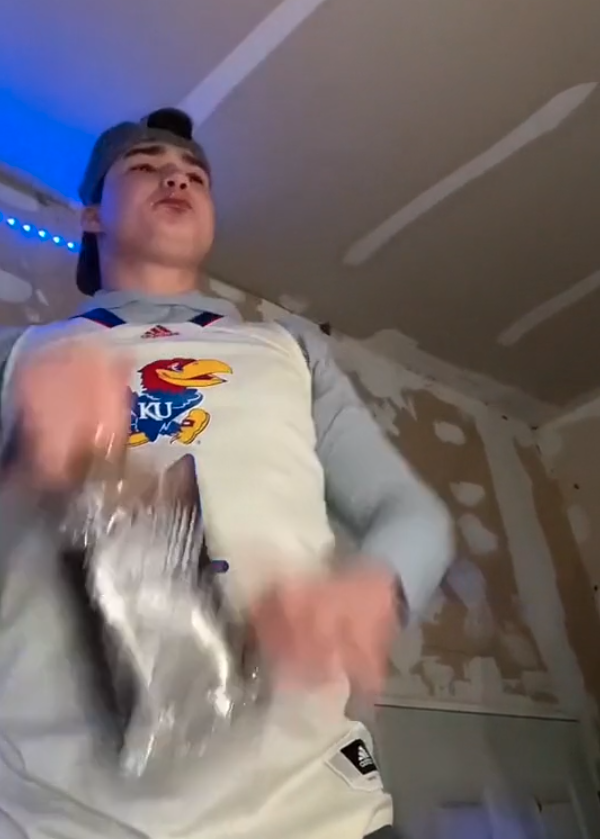 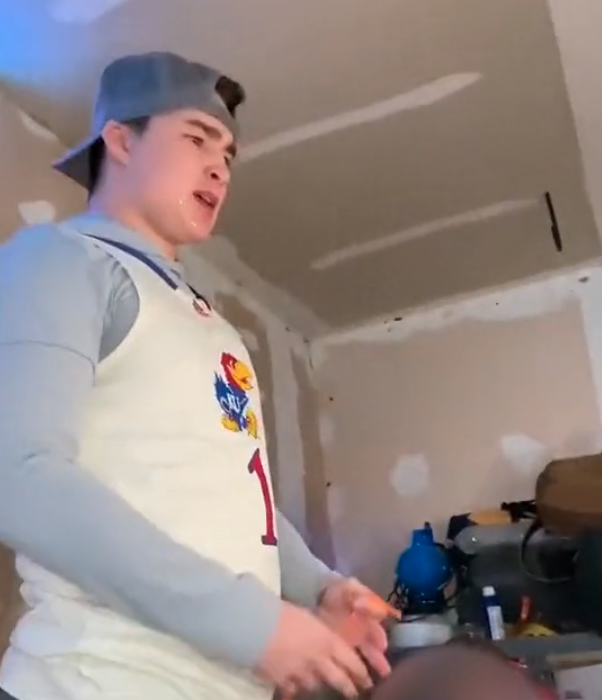 Despite thousands of social media users slamming his stunt as dangerous, the defiant student defended the feat as ‘impressive’.

Gann bragged that it was the fastest 'chugging' in the world and claimed it made him a "world record holder".

Although he admitted he would be worried if "young people" tried to copy him, as they could die, he brushed other people's concerns off, claiming he could not control what other drinkers did.

Gann said: “It’s not the best idea for me to be bragging about it on TikTok. But like I tell most people, it’s not cool but it is impressive.

"Not many people can chug that much even with water.

“It definitely is dangerous, it’s a dangerous move. I’ve been drinking like crazy this last year and I’ve casually been building it up and made it to 1.75 liters and now I’ve got it.

“It wasn’t really a target. At first I never knew I could drink that much. Once I realised I could just keep adding more and more then it was like 'how much could I reach?'. Once I made it, it was a big deal.

“With my science background I am concerned about what the chugging does [to my health] but regardless I’ve been doing it since Halloween this year.

“I would casually go through 750ml in a night but the first time I did a whole bottle in one slam was October 31.” 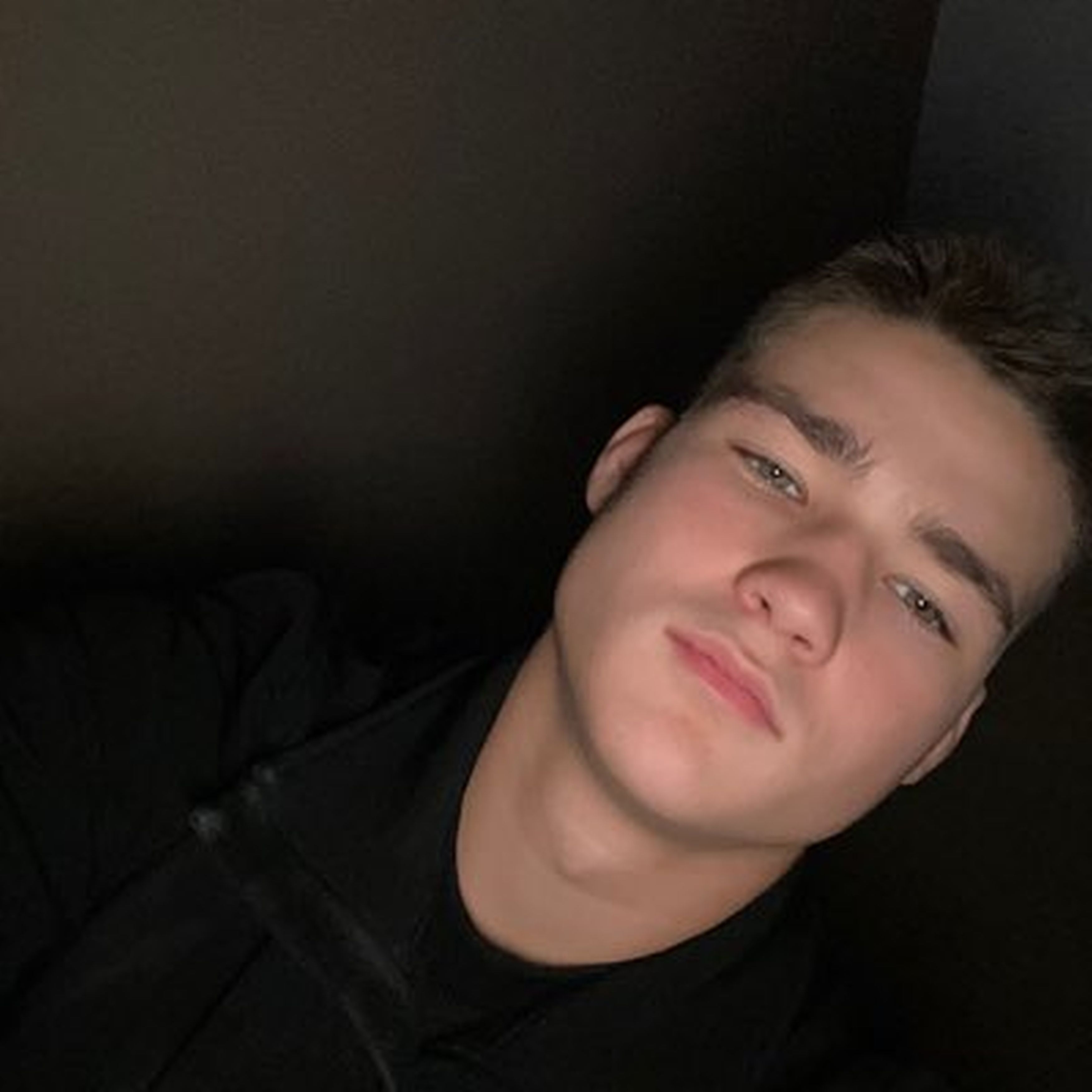 After uploading the video to his TikTok – where he proclaims to be a 'World Record Drinker' – the shocking footage has been viewed almost 10,000 times, with many asking if "he died".

Alongside this footage, Gann also has three more videos of him chugging booze – two with a 750ml bottle of Jack Daniels and a third where he downs a bottle of Fireball cinnamon whiskey while standing on a roof.

He said: “There is a worry that younger people will try and repeat it [after watching my TikTok] because this is a world record feat.

“If somebody were to die from it, I would feel terrible but I can’t control what everybody does."

In response to one TikTok comment asking 'is this dude still alive', Gann joked "nah I died" and "I died 10 minutes later" to another.

Darrien Ty Scott said on Twitter: "The fact that it's 2021 and people are still doing this after numerous deaths from people doing this says a lot."

Jon Nugent said: "Where is the video hours later in hospital having his stomach pumped?"

Daniel Nicholas added: "Should show him 30 mins later… getting carted off in a ambulance."

Maroš Hanko wrote: "I wish this is fake otherwise this lad is probably dead."

The University of Kansas has been approached for a comment.

In 2016 The Sun reported on a Newcastle University student in England who was taken to hospital in a life-threatening condition after "consuming excessive amounts of alcohol".

The 20-year-old died the following day. 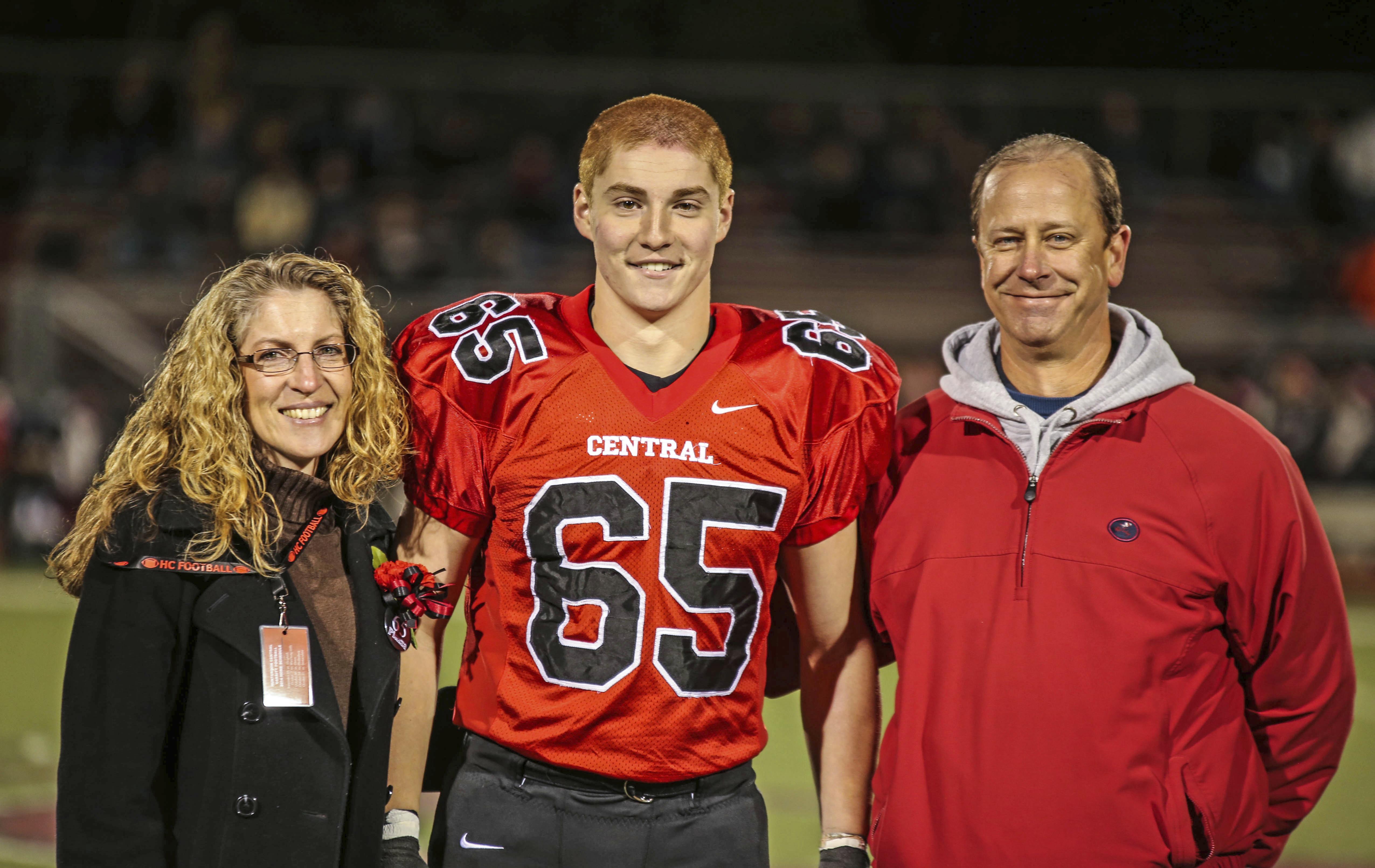 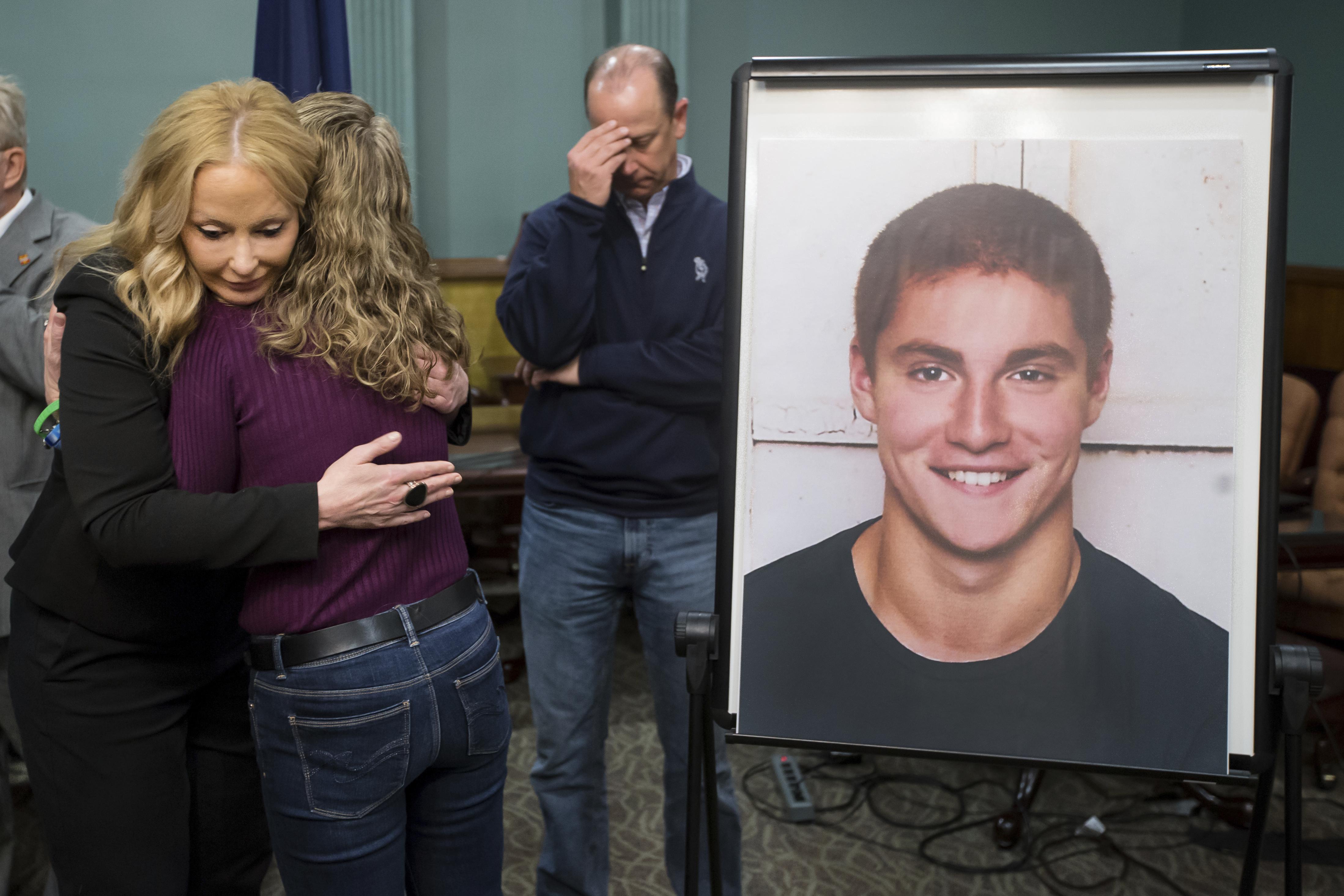 Tags: 'Reckless', universit
You may also like
Celebrities News