The reign is over for the self-styled "Queen of Richmond", who has been jailed for 18 years over her role as the Melbourne head of a drug-importing syndicate that smuggled heroin into Australia on commercial flights from Malaysia.

Michelle Ngoc Tran oversaw a well-organised enterprise responsible for importing 6.6 kilograms of heroin, with a value of up to $8 million, onto Melbourne streets between October 2018 and January last year. 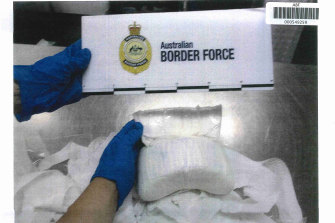 One of the packages of drugs intercepted by Border Force.

Tran's supplier was "Mr Hanoi" in Malaysia and they and other syndicate members organised for flight attendants to smuggle one-kilogram blocks of heroin – known as “tickets” – into Melbourne, where they were exchanged for cash at local hotels.

Tran boasted she had been in the drug business for nearly 30 years and her heroin was the highest quality in Australia, and told buyers she had a delivery arriving every week.

In keeping with the operation's hierarchy, she called herself the "Queen of Richmond", had an associate nicknamed "Princess" and referred to her couriers as "soldiers". She had them do the dirty work, from the physical exchanges in toilet cubicles to holding her mobile phone – of which she had six, all in false names – while she spoke.

That was not all about power, as County Court judge Michael Cahill said Tran used others to protect herself.

"You made arrangements to bring heroin into Australia from overseas and to sell it here," he said on Thursday.

"You gave directions to others who dealt with the heroin and the customers for you and to keep control of operations you oversaw their activities.

"You were very aware of the risk of detection but not deterred by it.

"You were cautious and took steps to minimise the risk. You used others to shield yourself from suppliers and customers and to handle heroin and cash on your behalf."

Tran's motivation was partly paying off gambling debts that hit $800,000, but Judge Cahill said the primary driver was profit. She paid $155,000 for each ticket and sold them to buyers for $195,000. She took half of the $40,000 profit margin for herself and divvied the rest among her underlings. 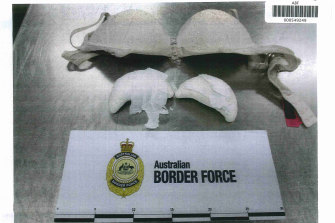 Flight attendants smuggled parcels of heroin in their bra and underwear.Credit:Australian Border Force

She has served 680 days in custody since her arrest, which came in the hours after Zailee Zainal, a flight attendant with budget airline Malindo Air, was found carrying heroin in her underwear and bra when searched at Tullamarine on January 7 last year.

Judge Cahill said Tran's moral culpability was high and her offending very serious in her position at the apex of a well-organised and sophisticated syndicate that dealt with large amounts of drugs and money.

But her guilty plea was evidence of remorse and avoided a long and complex trial. The judge also acknowledged Tran had a limited criminal history – she was fined $100 in 2017 for defying an exclusion order and visiting Crown casino – and would be isolated in prison away from her adult daughter, her only family in Australia.

Tran is the sixth syndicate member jailed in six weeks.

Zainal was jailed for 9½ years after Judge Cahill found exceptional cases existed in the flight attendant's case, as she was vulnerable when first asked to smuggle drugs because her young daughter's serious ill-health left her family facing large medical bills.

Tran's friend, Thi Thuy Tam Tran, who did the exchanges with Zainal, was jailed for 10½ years, while Beng Lee Goh, who was arrested soon after he handed over drugs to a buyer at the Immigration Museum, was jailed for six years.

Mother and son Thuy Thanh Thi Tran and Khoi Phan were both jailed for at least a decade after selling ice in the western suburbs. Two others were previously sentenced by magistrates for low-level offending.

Two men, one a member of a Malaysia Airlines flight crew, will face trial next year.

But other syndicate members flew out of Australia before they could be arrested and police were unable to intercept four tickets that were imported.

MICHELLE NGOC TRAN, 49. Also known as Lily, Ngoc, “The Queen” or “The Queen of Richmond”. Melbourne-based head of an international syndicate involved in the importation of heroin in Australia. Drove a red 2016 Mini Cooper sedan.

MR HANOI. Drug supplier to “The Queen”, based in Malaysia. Contact between the two was facilitated by men known as Johnny and “The Manager” who were both based overseas.

KHA TIEN NGO, 57. Also went by the name of Danny and Brother Hung. Drove a white Porsche Macan wagon. Was of significant standing within the Melbourne-based arm of the syndicate.

ZAILEE HANA BINTI ZAINAL, 40. Malaysian national who at the time of her arrest was a member of Malindo Air cabin crew. Also went by the names Joanna and Mary. Carried out about 20 drug importations before her arrest in January last year.

THI THUY TAM TRAN, 49. Also known as Lina and Tam. Came to Australia in 1992 and was a friend of The Queen. Worked as a courier, collecting drugs from crew members in hotel bathrooms and paying them in cash.

BENG LEE GOH, 44. Malaysian national who also was known as Raymond and used the name Tommy during offending, guilty of trafficking heroin.

THUY THANH THI TRAN, 57 and son KHOI PHAN, 28. Thi Tran, also known as Phung or Sister Phung, helped to source methamphetamine which she gave to her son to sell to Ngo.

A 45-year-old Malaysian national who was a member of the Malindo Air cabin crew left Australia last in December, 2018 and has not returned.

A 38-year-old woman known as Princess has not yet been charged and is currently in custody in WA for unrelated matters.

Tags: 1:, falls, of, Queen, Richmond', to
You may also like
Celebrities News