Moscow: To Russian President Vladimir Putin, the collapse of the Soviet Union “was the greatest geopolitical catastrophe of the century”.

He made that statement in 2005, just months after Ukrainians launched their “Orange Revolution” and began to shake off Russia’s influence in the country, spurring Kiev’s pro-democracy leanings. Two years earlier, an uprising in the Caucasus country of Georgia had ousted its Soviet-holdover president.

Although Putin clings to Soviet nostalgia – and to a self-drawn map of Moscow’s “sphere of influence” that covers much of the former empire – the countries surrounding Russia have other ideas. The latest example is sweeping anti-government protests in Kazakhstan that have rattled a political system entrenched for three decades and brought in Russian-led forces to try to keep a lid on the unrest. 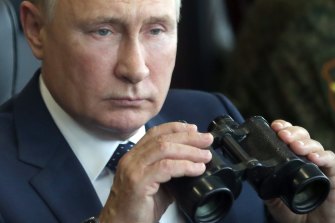 Putin has long accused the West of trying to curtail Moscow’s reach. Now, he is portraying Russia as more threatened than ever and is demanding guarantees from the United States and NATO that the military alliance will stay out of what he considers the Kremlin’s turf. He has also called for the removal of NATO infrastructure installed in Eastern Europe after 1997.

NATO has said Moscow can never dictate the alliance’s future. But negotiations between Russian and US envoys begin on Monday in Geneva in efforts to close the divide and cool tensions over Ukraine, near whose eastern border Russia has massed military forces.

For Putin, the wider goals are to rework the consequences of the Soviet Union’s demise in 1991 – what he has called “a disintegration of historical Russia”. But 30 years on, the generation rising into power in those countries do not share his romanticism of the Soviet Union, in part because they never lived it.

In western Kazakhstan – where protests started over steep fuel price increases – some demonstrators chanted “Old man, go!” regarding 81-year-old Nursultan Nazarbayev, who was the country’s president from the collapse of the Soviet Union until 2019 but remains de facto ruler. In 2020 in Belarus, crowds rising up against President Alexander Lukashenko, who has been in power since 1994, chanted: “Leave! Leave!” 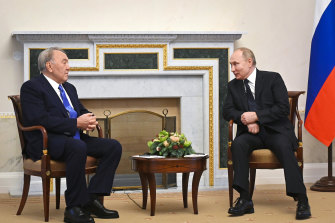 “But these are dreams that of course affect the behaviour of the Kremlin,” he added.

From Ukraine to Georgia to Armenia to Belarus to Kazakhstan, a popular revolt has at some point demanded the end of each country’s Soviet-era legacy and leadership. And the challenge to authoritarian regimes in Putin’s backyard is seen by the Kremlin as a challenge to him and the system he has installed in Moscow.

The protests in Kazakhstan have proved to be a pivotal moment. Putin could not risk having the unrest bring in a new government unfavourable to Moscow, analysts say. So he opted to intervene, deploying troops as part of a Russian-led regional military alliance to help quell the protests. Propping up Kazakhstan’s regime also appears to be a longer-term play for Putin: to build even deeper loyalty to Moscow and to curb the influence of China’s growing investments and the West’s overtures for closer ties.

In April 2009, then US president Barack Obama and his Russian counterpart Dmitry Medvedev had a first face-to-face meeting on the sidelines of the G20 summit in London. Medvedev had ascended to the presidency because Putin had just served out the maximum two consecutive terms in that office. Yet Putin, then Russia’s prime minister, was still largely running things.

It was during that meeting that Medvedev cited Moscow’s “privileged sphere of influence” amid Russia’s push for Kyrgyzstan, a former Soviet republic in Central Asia, to close a US military air base at Manas, said Michael McFaul, who became the Obama administration’s ambassador to Russia two years later.

“Obama told him, ‘I don’t get this privileged spheres of influence stuff’,” McFaul said. (The Manas base closed in 2014.)

Washington has continued to push back on the concept of a sphere of influence – which is at the centre of the upcoming talks between the United States and Russia. Moscow has posted more than 100,000 troops near its border with Ukraine in an obvious threat to re-invade the country nearly eight years after its illegal annexation of Crimea and the beginning of Kiev’s war with Russian-backed separatists in eastern Ukraine.

Putin’s end-of-year news conference on December 23 was a lesson in how he views Russia’s geostrategic family. He said that in 1991, “we divided ourselves into 12”. The Soviet Union was made up of 15 states. But Putin, probably on purpose, excluded the Baltic countries of Estonia, Latvia and Lithuania – all European Union members that turned away from Russia years ago. 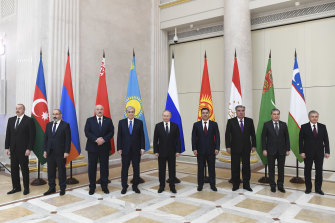 The other 11 countries of the former Soviet Union – Eastern Europe’s Ukraine, Belarus and Moldova, the Caucasus’s Georgia, Armenia and Azerbaijan and Central Asia’s Kazakhstan, Kyrgyzstan, Turkmenistan, Tajikistan and Uzbekistan – all get different treatment from Russia.

The ones seen as loyal are rewarded with economic support such as loans, investment contracts and discounts on energy imports, or even the promise of military assistance. But Moscow also wants some things in return – that they limit cooperation with the West and keep alive the Russian language in those countries, for example.

The Kremlin playbook for how to handle the countries that push back against Moscow – such as Ukraine, Moldova and Georgia – has included backing pro-Russian separatists who have carved out breakaway territories. Moscow has denied instigating those conflicts.

“Putin thinks as a kind of 18th-century or 19th-century leader about spheres of influence – most certainly that was the case when I was in the room with him, and that’s been there for a while,” McFaul said.

“His ambitions are bigger than just his own neighbourhood,” he added. “Putin thinks of himself as a leader of a kind of nationalist Orthodox conservative movement fighting the decadent, liberal and multilateral West. That has grown over time without question.”

Kazakhstan’s Nazarbayev was considered the lone leader in the region who could say no to Putin.

Twelve years Putin’s senior and a Soviet legacy, Nazarbayev had Putin’s admiration. Many even speculated that Putin might try to follow Nazarbayev’s example of how to continue ruling even after officially relinquishing the presidency. Nazarbayev handpicked his successor and took on a “leader of the nation” title that has allowed him largely still to call the shots. 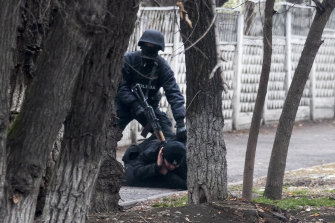 An armed riot police officer detains a protester in Almaty, Kazakhstan, on Saturday.Credit:AP

Then, on January 5, Kazakh protesters pulled down a statue of Nazarbayev – an act analysts say was a chilling development for Putin.

“I think any time where autocrats are at risk of being overthrown by their own citizens and through the streets, I think Putin views that as a direct threat to his own survival and the survival of his regime,” said Andrea Kendall-Taylor, a Russia expert at the Centre for a New American Security, a Washington-based think tank.

Putin has a history of supporting authoritarian leaders, even outside the former Soviet Union. He provided critical aid to Syria’s Bashar al-Assad during Arab Spring protests and backed Venezuela’s Nicolas Maduro. In 2020, when Belarus’s Lukashenko was facing mass protests calling for his resignation, Putin offered a public show of unity and said Russia would send in military reinforcements “if necessary”.

Lukashenko claimed, without evidence, that the opposition movement was a Western plot to oust him. Kazakh President Kassym-Jomart Tokayev has similarly likened his country’s protesters to “terrorists”, some of which he alleged without offering proof are from abroad.

Edit the Brisbane Times websiteThese are favourite scapegoats of Putin’s, too.

During his news conference last month, Putin said that “opponents have been saying throughout the centuries that Russia cannot be defeated, but can only be destroyed from within”, which they accomplished “in the 1990s, when the Soviet Union was being dismantled from within”. 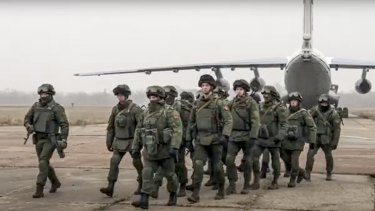 Kazakhstan has turned for help to a Russian-led security bloc, the Collective Security Treaty Organisation, to quell protests. Thousands of Russian troops have now been dispatched to the country.Credit:RDM/AP

Arkady Dubnov, a Central Asia expert, says the former Soviet Union is undergoing “a midlife crisis”. With the passage of time, those former member countries have fostered stronger national identities with wide-ranging aims, some of which clash with Russia’s identity and aims.

“That signals an end of a certain stage in the development of the post-Soviet space,” Dubnov said.

“The people in power are people of the last century, both physically – I mean, they have been in power since the last century – and mentally,” he added. “Young people poorly understand them, and they generally do not perceive them as their presidents, as someone they elected or someone that share their values, concerns and problems.”