Putin makes it illegal to compare the Soviets to the Nazis: Russia’s ‘humanitarian mission’ in liberating Europe must be recognised – despite Stalin’s bloody tyranny that saw millions killed

Vladimir Putin has made it illegal to compare the Soviets to the Nazis, ordering that Russia’s ‘humanitarian mission’ in liberating Europe must be recognised.

The Russian president’s uncompromising view whitewashes Stalin’s tyranny, his early alliance with Hitler in carving up Poland and the genocidal terror of the Great Purge.

Putin signed the bill last night which bans the publication of material which draws parallels between the ‘aims and decisions’ of the Soviets and the Third Reich, and anything which denies the Red Army’s ‘decisive role’ in defeating Hitler.

The Kremlin has increasingly hardened its historical revisionism to use World War Two as a pillar to unite a society that Putin has said lost its moral bearings following the 1991 Soviet collapse. 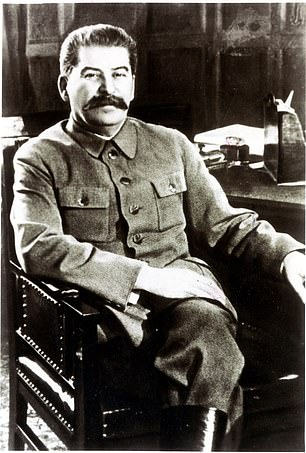 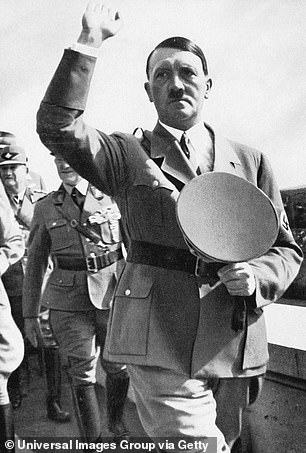 Joseph Stalin (left) and Adolf Hitler must not be compared to one and other, according to a new Russian law signed by Vladimir Putin. This despite wholly legitimate historical parallels based on their respective tyrannies, mass murder and starvation of civilians, as well as the military and economic help they gave each other in WWII 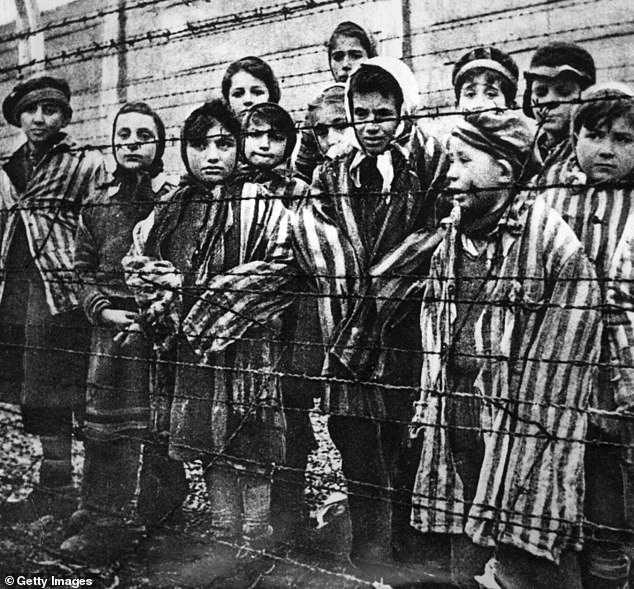 A group of child survivors behind a barbed wire fence at the Nazi concentration camp at Auschwitz-Birkenau in southern Poland, on the day of the camp’s liberation by the Red Army, 27th January 1945 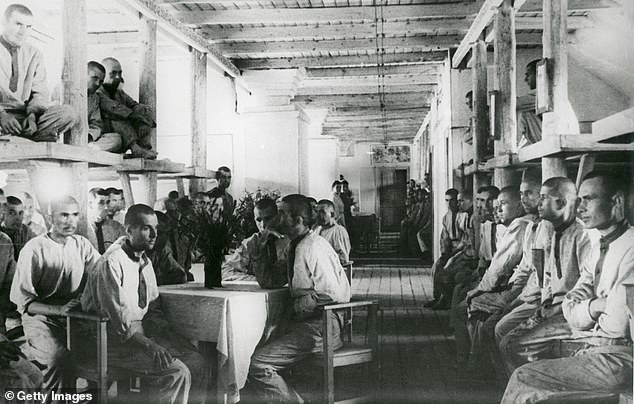 Prisoners of the Vorkuta Gulag (Vorkutlag) – one of the major Soviet labor camps, Russia, Komi Republic, 1945. 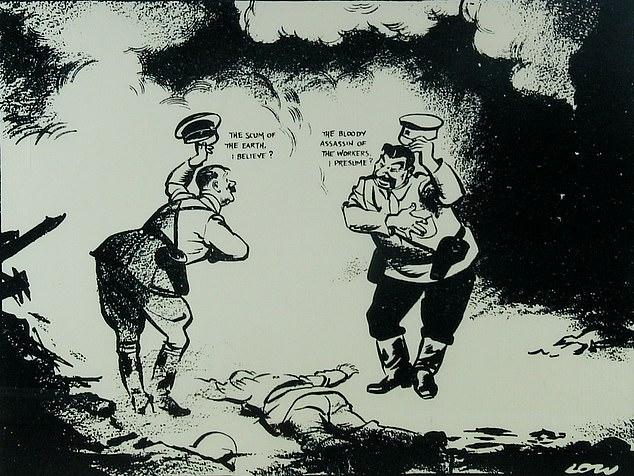 A famous cartoon by Sir David Low satirising the Molotov-Ribbentrop Pact. Hitler says to Stalin: ‘The scum of the earth, I believe?’ And Stalin replies, ‘The bloody assassin of the workers, I presume?’ It was published in The Evening Standard in September, 1939

Hitler’s alliance with Stalin that paved the way for WWII

In August 1939, Hitler and Stalin signed the Molotov-Ribbentrop Pact, agreeing on Soviet and German spheres of influence across Poland, Lithuania, Latvia, Estonia and Finland.

For Hitler, the secret pact meant he could carry out his imperialistic designs on eastern Europe without having to worry about Stalin’s intervention.

After Hitler invaded Poland on September 1 the Soviets moved in from the east, seizing great tracts of territory agreed upon in a secret clause.

Poland was crushed between the vice of Moscow and Berlin. More than three million people perished in Nazi-occupied Poland and an estimated 500,000 in the Soviet occupied part.

Over the next two years the Soviet Union and Germany signed economic pacts, with Moscow supplying raw materials to the German war machine including 865,000 tonnes of oil and 1.5 million tonnes of grain.

The Soviets even explored a possible entry into the Axis.

Hitler and Stalin’s envoys, Joachim von Ribbentrop and Vyachesla Molotov, who signed the eponymous non-aggression pact the year before, met for a two-day conference in Berlin in November, 1940.

Germany presented the Soviets with a draft of an Axis pact which defined the world into spheres of influence, German, Italian, Japanese and Soviet.

The talks eventually collapsed because of the intransigence of Hitler and Stalin over access to territories including Finland, as well as Bulgaria and Yugoslavia.

Hitler remarked to his top brass that Stalin ‘demands more and more’, ‘he’s a cold-blooded blackmailer’ and ‘a German victory has become unbearable for Russia’ so that ‘she must be brought to her knees as soon as possible.’

Hitler attacked the Soviet Union on June 22, 1941, tearing up existing treaties, in an attempt to conquer Communism.

He told his generals to conduct a ‘war without rules’ in which all cruelties were legitimate.

The Organisation for Security and Co-operation in Europe, founded after the Cold War to help keep peace in Europe, has said the Soviet Union was equally responsible for WWII, which claimed 50 million lives.

In 2009, the OSCE said both Stalinism and Nazism ‘brought about crimes against humanity and genocide’ and called for August 23 to be a day of remembrance for the victims.

The new legislation demands acknowledgement of ‘the Soviet Union’s humanitarian mission in liberating the countries of Europe.’

The claim is bound to infuriate former Soviet states like Estonia, Latvia and Lithuania, which say they were occupied by the Red Army and forced to join the Soviet Union.

Indeed, the Fall of Berlin, the Red Army’s proud victory celebrated in Red Square each year, was in part fuelled by Stalin’s suspicion that the Western Allies wouldn’t hand back territory occupied by them in the post-war Soviet zone.

Putin approved the new law in January following a period of bitter dispute with Poland over who caused the Second World War.

Two years ago, the European parliament adopted a resolution which agreed that the Soviet Union and Germany jointly ‘paved the way for the outbreak of the Second World War’ in August, 1939, with the signing of the Molotov-Ribbentrop Pact.

Putin hit back in a press conference in December 2019, claiming that the Soviet Union was the last country in Europe to sign a non-aggression pact with Nazi Germany after the other powers appeased him.

‘Stalin did not stain himself with direct contact with Hitler whereas the French and British leaders met with him and signed some documents,’ he said, adding that Soviet forces only entered Poland, ‘after the Polish government lost control over their armed forces’.

The United States even entered the row, with Georgette Mosbacher, the American ambassador to Warsaw, tweeting: ‘Dear President Putin, Hitler and Stalin colluded to start WWII. That is a fact. Poland was a victim of this horrible conflict.’

The secret peace agreement between Hitler and Stalin, signed in Moscow by their envoys Vyachesla Molotov and Joachim von Ribbentrop, outlined the Soviet and German spheres of influence across Poland, Lithuania, Latvia, Estonia and Finland.

A month later, the two countries invaded Poland, carving it up into Nazi west and Soviet east, before Stalin went on to annex Estonia, Latvia, Lithuania and parts of Romania.

Poland was crushed between the vice of Moscow and Berlin. More than three million people perished in Nazi-occupied Poland and an estimated 500,000 in the Soviet occupied part.

Hitler’s invasion of Poland was a gamble, he signed the pact with Stalin thinking that only Russia might throw a spanner in the works, believing Britain and France would continue to appease his aggression. He was wrong; war was declared on Germany two days after the invasion of Poland.

While the secret deal was in force, Stalin supplied Hitler with 865,000 tonnes of oil, 1.5 million tonnes of grain and other raw materials, in exchange Berlin shipped military hardware to Moscow.

During the Battle of Britain, Soviet weather ships were even sending meteorological data to the Luftwaffe.

The Nazi’s eventually turned on Moscow and invaded the Soviet Union on June 22, 1941, in a bid to conquer Communism.

Hitler told his generals to conduct a ‘war without rules’ in which all cruelties were legitimate.

Putin’s hardline position on the Molotov-Ribbentrop pact has been revised over the years.

In 2009, he conceded the agreement had been ‘immoral’ but blamed Britain and France for crippling any hopes of putting up an anti-fascist front with the Munich Agreement in 1938. 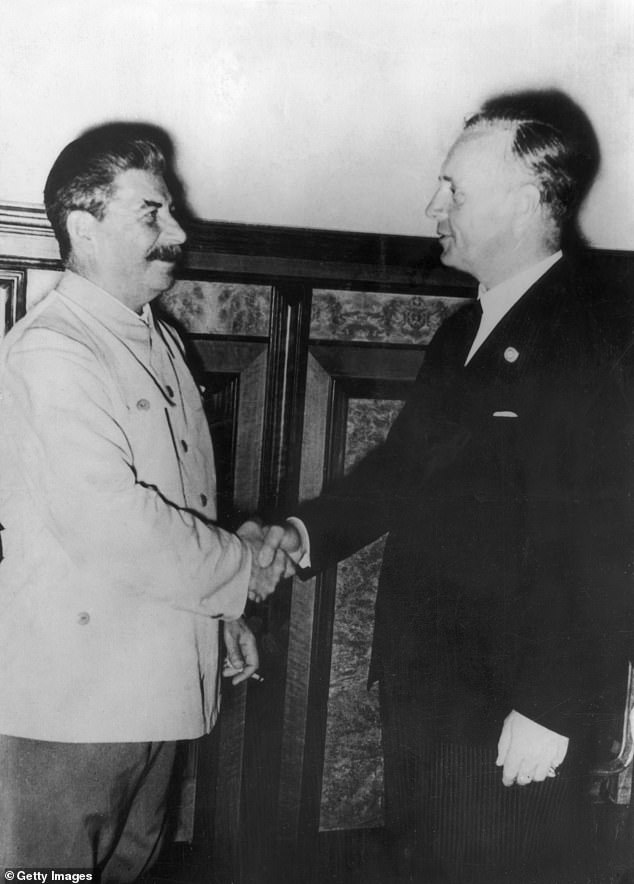 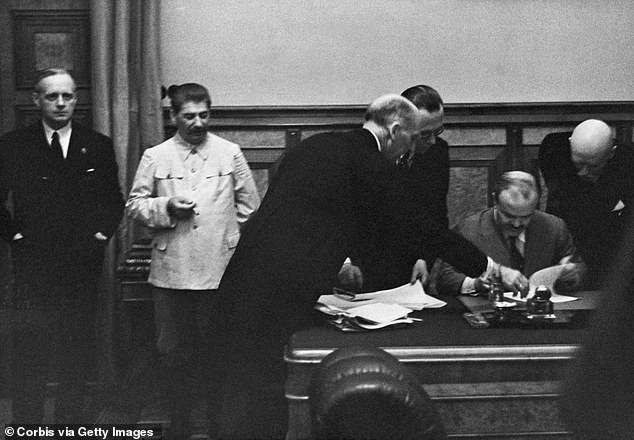 The pact, forged by British Prime Minister Neville Chamberlain and French PM Édouard Daladier with Hitler and Italy’s Benito Mussolini, permitted the German annexation of the Sudetenland – the German-speaking region of Czechoslovakia.

The Munich Agreement has become synonymous with the futility of Chamberlain’s policy of appeasement which only emboldened Hitler, although it did buy the Allies time to arm themselves.

In 2015, Putin claimed that the Molotov-Ribbentrop pact ‘made sense.’

And last year, the Russian president asserted it was unfair to say the pact was ‘the main reason for the start of the Second World War,’ but historians should make a ‘balanced assessment’ of what unfolded.

The bloody atrocities of Stalinism and Nazism

Political opponents and ethnic minorities were summarily executed, while others were sent to gulags where they died in horrendous captivity in Siberia.

Estimates vary widely on how many political prisoners and ethnic minorities were killed during Stalin’s reign. The data is difficult to interpret because the Soviets manipulated census figures.

However, some historians have put the total as high as 6 to 10 million, this being across his entire despotic tenure from 1922 to 1953.

The atrocity saw, not only Jews but also homosexuals, disabled people, Slavs and Roma, shipped across Europe to concentration camps to be killed in gas chambers and worked to death.

The most notorious camps were Auschwitz, Bełżec, Chełmno, Majdanek, Sobibór, and Treblinka in occupied Poland.

The Holodomor, or the Hunger, was a mass starvation of an estimated 3.5 million in Soviet Ukraine from 1932 to 1933.

When famine struck across the Soviet Union that year, the Ukraine was pillaged by the army and secret police who stole the harvest and all the food in villagers’ homes.

Ukrainians dropped dead in the streets, lay dying and rotting in their houses, and some women became so desperate for food that they ate their own children.

If they managed to fend off starvation, they were deported and shot in their hundreds of thousands.

The disaster, which Stalin wrote was designed to ‘break the back of the peasantry’ – to shatter their independent spirit – remained a state secret, denied by the government.

The Nazi Hunger Plan was devised to steal food from the Soviet Union and give it to soldiers and civilians to continue fuelling the German war effort.

It was devised by SS chiefs Herbert Backe along with Heinrich Himmler.

The architects of the plan agreed that the German army’s invasion of the Soviet Union, Operation Barbarossa, could only be carried out if the troops fed themselves off the land, Soviet infrastructure not being adequate to ship supplies across rail lines.

In drawing up the plans the Nazis concluded that ‘if we take what we need out of the country, there can be no doubt that tens of millions of people will die of starvation.’

This was no matter to Hitler or the Nazis who saw Slavs, Poles and Serbs as ‘untermensch’, literally meaning underman, or subhuman.

Historian Timothy Snyder estimates that ‘4.2 million Soviet citizens (largely Russians, Belarusians, and Ukrainians) [were] starved by the German occupiers in 1941–1944.’

Between 1929 and the year of Stalin’s death in 1953, 18million men and women were transported to Soviet slave labour camps in Siberia and other outposts of the Red empire – many of them never to return.

Prisoners worked in the most extreme climates, facing temperatures of -20C (-4F), as they cut down trees with handsaws and dug at frozen ground with primitive pickaxes.

Others mined coal or copper by hand, often suffering painful or fatal lung diseases from inhaling ore dust while on the job.

Labourers in the prisons worked up to 14 hours a day on massive projects, including the Moscow-Volga Canal, the White Sea-Baltic Canal, and the Kolyma Highway.

By the time the last Soviet gulag closed its gates, millions had died. Starvation was not uncommon, as prisoners were barely fed enough to sustain such difficult labour. Other prisoners were simply dragged out to the woods and shot by guards.

From 1933 to 1945, Nazi Germany operated more than a thousand concentration camps across occupied Europe.

The camps were run exclusively by the SS, Hitler’s paramilitary organization made up of those most loyal to Nazi ideology, which believed the German race to be superior to all others and wanted to exterminate those deemed ‘inferior.’

The first camps were filled with many of Hitler’s political opponents, most of them Communists.

Many were killed in gas chambers, others died of starvation, in extreme working conditions, while others were killed by firing squad and by hanging.

The most notorious death camps were Chelmno, Belzec, Sobibor, Treblinka, Majdanek and Auschwitz-Birkenau in occupied Poland.

Tags: comp, illegal, It, makes, Putin, to
You may also like
Celebrities News