London: Prince William has led a chorus of condemnation of the “abhorrent” racial abuse thrown at England players who missed penalties in its shootout loss against Italy at the Euro 2020 final.

The sides drew 1-1 and Italy won the shootout 3-2 after England players Marcus Rashford, Jadon Sancho and Bukayo Saka, who are all black, missed spot-kicks. 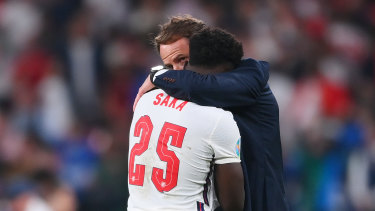 The result triggered a wave of online abuse which the heir to the throne and Football Association president condemned in a personal message on Monday morning local-time.

“I am sickened by the racist abuse aimed at England players after last night’s match,” William said.

“It is totally unacceptable that players have to endure this abhorrent behaviour.

“It must stop now and all those involved should be held accountable.” 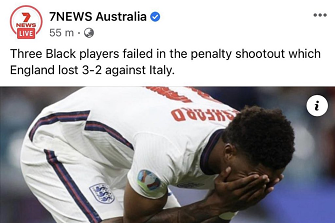 7 News Australia has also been caught up in the furore after posting a story on its Facebook page following Sunday’s final with the comment: “Three black players failed in the penalty shootout”.Credit:Facebook

7News Australia has also been caught up in the furore after posting a story on its Facebook page following Sunday’s final with the comment: “Three black players failed in the penalty shootout”.

The word “black” was subsequently deleted but British Labour frontbencher David Lammy highlighted the post as an example of why England players took the knee before each game in the tournament.

“Praying for a better future – worthy of the values, beauty and respect exemplified by every single England player,” he wrote.

“The caption on the post was swiftly rectified as soon as it was identified. We sincerely apologise for the offence the post caused.”

“With racism a rising social scourge in Australia, on online platforms and athletes subject to vile abuse after the Euro 2020 final here in Australia, to see this from a major network in Australia is beyond disgusting,” he wrote on Twitter. “Reprehensible.”

England manager Gareth Southgate, who has been under pressure over his choice of penalty takers, said the abuse was “unforgivable”.

“We have been a beacon of light in bringing people together in people being able to relate to the national team, and the national team stands for everybody and so that togetherness has to continue.

“We have shown the power our country has when it does come together and has that energy and positivity together.

“It’s my decision who takes the penalties, it’s not a case of players not volunteering or more experienced players backing out.”

Saka, 19, and Sancho, 21, sobbed on the shoulders and chests of their teammates as Italy celebrated.

“Last night we witnessed the leadership and character we’ve always known and loved in Bukayo,” the club said in a statement. “However, this feeling of pride quickly turned to sorrow at the racist comments our young player was subjected to on his social media platforms after the final whistle.

“Once again, we are sad to have to say we condemn the racism of a number black players. This cannot continue and the social media platforms and authorities must act to ensure this disgusting abuse to which our players are subjected on a daily basis stops now.

“Our message to Bukayo is: hold your head high, we are so very proud of you and we cannot wait to welcome you back home to Arsenal soon.”

UK Prime Minister Boris Johnson said on Twitter: “This England team deserve to be lauded as heroes, not racially abused on social media.

“Those responsible for this appalling abuse should be ashamed of themselves.”

Tags: by, Prince, Sickened, Th, William
You may also like
Celebrities News